Faith in the Family

The Virgin, the Copts, and Me (La Vierge, les Coptes, et moi) 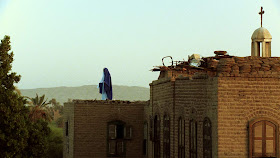 With the declaration of Habemus Papam fresh out of the oven, Wednesday felt like an unbelievably lucky night for DiverCiné to have programmed the French/Egyptian/Qatari co-production The Virgin, the Copts, and Me (La Vierge, les Coptes, et moi). On a day on which #VeronicaMars was out-trending #PopeFrancisI, this documentary’s comical exploration of faith in the new millennium seemed especially appropriate. Director Namir Abdel Messeh takes a sceptical look at the mania of the Catholic Church by exploring a few acts of divine apparition that have graced his native Egypt over the years. The erratic filmmaker, however, enjoys a shotgun-style of filmmaking and eventually sets his sights on a subject that could restore viewers’ faith in the family.

Prompted by a family home-movie session in which his mother, Siham, claims she sees an image of the Virgin Mary on a recording, Namir decides to mine the history of the Virgin’s relationship with Egyptian Catholics. See, Namir doesn’t see a thing when he looks at the same image to which his mother pauses, points, and insists she sees the Virgin. The difference could simply be that Namir’s lack of faith results in a loss of vision, but the filmmaker thinks the disparity between what his mother sees and what he does not see reveals much more about Egyptian culture.

Namir decides that such a journey is best unearthed via a return to the origin of the Virgin’s relationship with Egyptian Catholics. An apparition in 1968 at a church in the town of Zeitoun offers the starting point for Namir’s quest. In Zeitoun, the Virgin allegedly appeared before a mass of people, all of whom—like Namir and his mother—have differing accounts of what they saw.

Namir films a search that scours Zeitoun for witnesses to the Virgin Mary’s apparition at a local church. The director encounters a cast of colourful character with diverse reactions: some swear they saw Mary appear before their eyes; while others say they observed smoke, light, and a presence; and others laugh and say that Mother Mary came nowhere near the town. Marked by an amicable religious divide between the Catholics and the Muslims, plus an underlying tension from the minority Copts, of which the director’s family was a part before they moved to France and converted to Christianity, this journey to Egypt shows a far more amenable portrait of difference and tolerance between the different religious groups. Only a kerfuffle or two related to filming prompts any note of religious conflict. Not a mention is made of the Arab Spring movement until the film’s ending credits when Namir’s producer suggests that distribution deals might be easier to land if he could find a way to tie his quest to the revolution that’s going on in Egypt. “What revolution?” Namir replies as if his holy scavenger hunt has him wrapped in a veil of humorous ignorance.

The Virgin, the Copts, and Me is well made, fun, and engaging in spite of Abdel Messeh’s rambling, almost aimless approach to the subject. It looks as if the director wandered into Egypt without much pre-production and planned to shoot the movie on the fly. (Eh, it worked for Casablanca.) The film becomes even more sporadic when the director’s French backers abandon him when he demands more time to allow the project to follow through fruition.

Namir’s mother is a real character of the film, though, as she spends much of the running time insisting on the stupidity of the project, yet aiding it to the very end. Siham insists that her family not appear on camera—much of the film depicts her in some sort of rant—because she doesn’t want her life exposed on film. Her family jumps into the frame regardless and enjoys the chance to make history in their modest surroundings.

The Virgin, the Copts, and Me might appeal to fans of the recent festival hit Where Do We Go Now? thanks to its familial farce about religion and gender. The film nevertheless shows that a much better film can be achieved when a boring/bullshit idea is abandoned and the project takes on a spur-of-the-moment jaunt into creative collaboration. As Namir moves on to reconnect with his Egyptian relatives and films their engagement with the Virgin, he takes the film from dry navel-gazing to full-on Wag the Dog farce. The film is a crowd pleaser even though—or if only because—much of the film features simple portraits of family members mugging at the camera in a “Hey, look, Ma – I’m on TV!” kind of fashion. It’s all a grassroots filmmaking affair, too, so it’s just as relevant to the Veronica Mars debate as it is to the religious musings that it undertakes, but mostly abandons as it moves along.

The Virgin, the Copts, and Me screened in Ottawa on Wednesday, March 13 as part of the Canadian Film Institute’s DiverCiné festival.