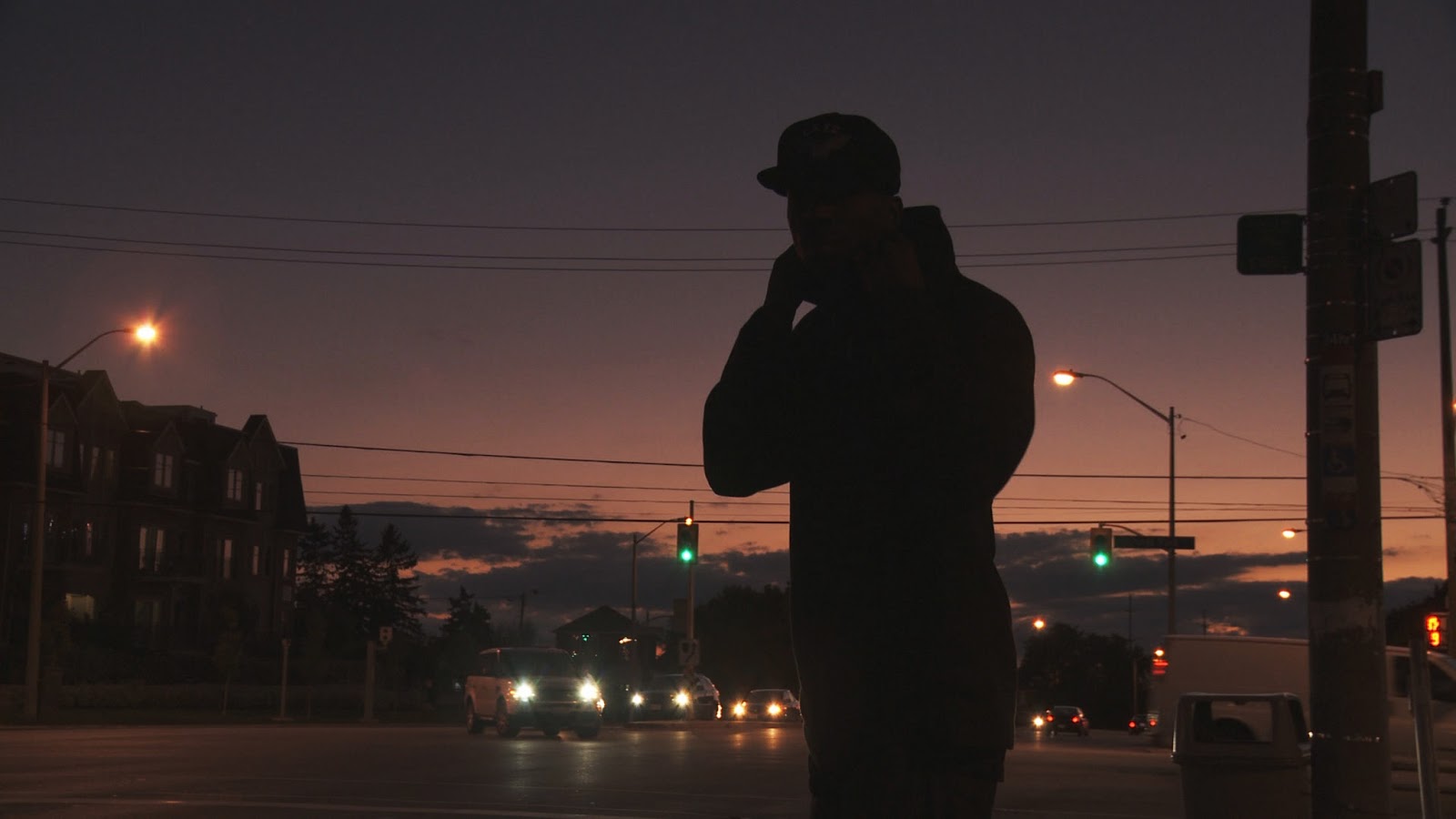 Alias is one of the most urgent documentaries for Toronto audiences at Hot Docs this year. This stark, gritty, and street-smart doc by Michelle Latimer is a timely film in the wake of the city’s escalating media coverage of shootings and violent crimes. Alias explores the story omitted from the sensational headlines and takes the camera to the city margins. Using the story of five local rappers—Alkatraz, Alias Donmillion, Trench, Master Knia (Know It All), and Keon Love—Alias looks behind the stereotypes of Toronto’s rap scene.

The film beings by signalling directly the stereotypes the media often associates with rap. Alias opens with a music video that Latimer intuitively follows with an associative montage of violence, police arrests, surveillance footage, and more. “Rap music” is synonymous with “thug life,” as Alias flags our perception of rap to be, but the ensuing hour of the film breaks down our assumptions and lets figures in the rap scene tell their own stories in their own voices.

“Black people have been the first at being the last for a very long time…so we’re trying to just to get even. Nobody wants to grow old and broke,” says Alkatraz in a scene that comes late in the film. Similarly, one of Alkatraz's fellow rappers, Knia, explains to the camera that he is pursuing a law degree to create new options and opportunities, not only for himself but also for his daughter. The importance of a law degree, Knia notes, became clear when many of his peers experienced convoluted legal battles and slip-ups as a result of not knowing the law.

The law doesn’t look to be on the side of Toronto’s black community, as one early scene in Alias shows. A concert of several Toronto rappers requires a booking of excess cops to guard and monitor the nightclub. The officers pat down the concertgoers with a thoroughness that someone likens to an airport security check. The subject’s comment is made in reference to the meticulousness of the search—he is even asked to remove his shoes—but the quip could just as easily refer to the kind of racial profiling that frequents airport security checks post-9/11. The police presence at the concert shows an immediate assumption of violence in the rap scene. (Security for Justin Bieber probably isn’t nearly as intense in spite of the difference in venue capacity.) The show goes on regardless and the vibe in the crowd is that of a community gathering, not of a gang war. The pointlessness of the police presence is highlighted by the end of the sequence, as the performers actually make less money at their show than the cops did, thus making means and opportunity harder to come by for a rapper.

The artists describe their music as a getaway, or a means of survival in neighbourhoods that have become known as “territories”. The stories provided by the rappers notes effects that violence has wrought on their communities. Showing the faces of fallen peers and describing funereal eulogies, Alias reveals the lateral effects of violence and reminds its audience that the effect of a shooting is felt in a ripple wider than that of the immediate victim. Alias, however, notes rap music as the alternative for channelling frustration and anger. The music, highlighted in observational sequences and on the soundtrack, complements the testimony from the rappers.

Alias marks an impressive feature debut for Michelle Latimer, whose short film Choke was my pick for the best Canadian short of 2011. As she did in Choke, Latimer provides as insightful, important look at a relevant issue in Canadian communities. Alias shows a much different approach to storytelling from Choke, though, as the brilliant animation of Latimer’s short was a haunting evocation of a complex story. The sparse, uncontrived observational style of Latimer’s approach allows Alias to provide a voice for and from Toronto’s black community without any of the manipulation these stories receive in the media. Alias, raw and realistic, looks beyond the stereotypes and tells the truth.

Screens with:
My Black Box (Ma boîte noir)
(Canada, 12 min.)
Dir. Nicolas-Alexandre Tremblay
My Black Box directed by Nicolas-Alexandre Tremblay, is an appropriate opening act for Alias. My Black Box brings a telling celebrity story to Hot Docs by following Montréal rapper Dramatik as he shares with a group of students the art of making a good beat. Dramatik explains that rap helped him find a voice to overcome a stutter that resulted from childhood trauma, and his lesson with the students of an inner city school imparts an artistic outlet for articulating fear and anger as artistic expression. Like Alias, My Black Box is an empowering tale of shared experiences.