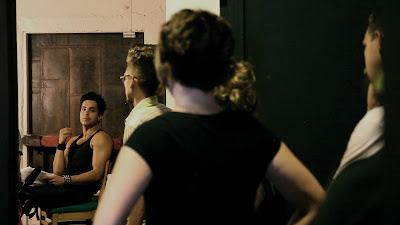 The 1980 film Cruising, directed by William Friedkin and starring Al Pacino, stirred some controversy by connecting a tale of a serial killer with an exploration of New York’s gay nightlife.  Interior. Leather Bar directors Travis Matthews and James Franco discuss it with their actors as a problematic conflation of a gay lifestyle and criminality. Adding to the notoriety of Cruising, they note, are forty minutes of footage that were cut to avoid an X rating. Matthews and Franco decide to re-imagine what kind of action might have been excised from the Pacin film and was never seen by the eyes of mainstream audiences.

Matthews and Franco re-create the footage from Cruising in a hybrid docudrama that examines whether attitudes to onscreen sex have changed since the 1980s. Interior. Leather Bar revisits Cruising as an experimental avant-garde mix of behind the scenes action and explicit sex. It’s an admirable concept that just doesn’t work.

One scene of Interior. Leather Bar sees Franco explaining the philosophy behind the project with lead actor Val Lauren, who plays a stand-in for the Pacino character. Franco notes his frustration with Hollywood’s ongoing preference for sanitized hetero-normative lifestyles when it comes to onscreen love, so he sees the project as an effort to bring onscreen homosexual relationships closer to the mainstream. Interior. Leather Bar certainly succeeds in bringing explicit gay sex to the big screen, but it doesn’t seem likely to benefit the cause as well as Franco would hope. For one thing, most of the cast members of Interior. Leather Bar seem to cite their desire to hob-nob with James Franco as their main desire for doing the film. (Audiences catching the film primarily to see if Franco goes full-porno will also be disappointed. He mostly plays the role of co-director here.) Franco and Matthews seem to be on to something, but their project doesn’t enjoy the full cycle of its fruition.

The motivation behind Interior. Leather Bar keeps the film from being smut, although the onscreen action is borderline pornographic. (It’s more explicit than any kind of sexual content that earns a hard R-rating.) Interior. Leather Bar also shows that little might have changed since Cruising, for “playing gay” still seems to be a talking point among actors. The first question, both scripted and non-scripted, that typically arises between the cast members of Interior. Leather Bar is whether one is straight or gay. The project itself seeks to normalize sexual attitudes and behaviours; it draws attention to them and categorizes them. Most problematic, however, is how the film unintentionally mirrors the flaw that the filmmakers seek to correct from Cruising: homosexuality still comes across as taboo or at least as something markedly different from straight/heterosexual relationships.

Especially interesting, though, is Lauren’s take on the Pacino character. Lauren, who is heterosexual and married, seems very uncomfortable in the role of the watcher. He plays the Pacino character ill at ease while he himself seems to hide behind his hand as he/his character watches the cruisers in the room. Similarly, the actor seems to suffer a sort of identity crisis on the set, debating the role with Franco while saying he “doesn’t get” the project or chatting with his brother on the phone who advises him not to play the part. The muddled meta cruise of Interior. Leather Bar muses whether playing gay character should really be such a conflict for an in 2012. Alternatively, one could view Lauren as the unwitting dupe in a social experiment, but the film never furthers his awkward bashfulness to generate meaning into the project, which can't shake the feeling that it was conceived and created in a hurried brainstorming session.

Cruising probably presented an enormous career-risk for Al Pacino back in 1980, especially if the role featured unsimulated male-on-male sex, but in a post-Brokeback Mountain age of filmmaking, one hopes that onscreen representation need not inspire so much schoolyard whispering. Brokeback itself proves a smart alternative to Interior. Leather Bar, since the bareback cowboy pic showed that a film could indeed take cinematic relationships beyond the perceived hetero norm. The muddled explicitness of Interior. Leather Bar, however, probably won’t see much life beyond a festival late-night screening or a dark room in a gallery. There’s a great idea behind the experiment of Interior. Leather Bar but this dull meta-mess hints that the lost footage of Cruising presents no great find.

A much more enjoyable and enlightening take on sexuality comes in the hilarious short Coffee Time. Four elderly ladies come together for a coffee date and, to much surprise, the conversation over sticky buns and chocolate pie concerns wonky penises, orgasms, and post-coital cuddling. Oddly enough, the geriatric sexuality seems more taboo than the subject matter of Interior. Leather Bar. (Old people still do it?) Coffee Time, however, is an uproarious and moving look at how attitudes towards sex have changed over time, but love, the link between it all, has remained constant.