Hot Docs Review: 'The Life and Crimes of Doris Payne'

The Life and Crimes of Doris Payne 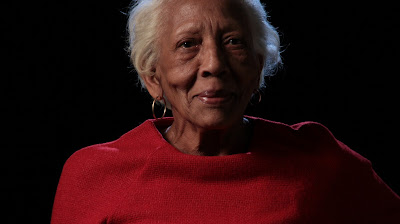 "I don't take life too seriously. I'm not going to get out of it alive anyway."
-Doris Payne


Are documentary subjects eligible for acting awards? I hope so, for Doris Payne gives a tour-de-force performance in The Life and Crimes of Doris Payne that is worthy of the Academy Award for Best Actress. Her story is soon to be a dramatic film, however, so pundits best keep an eye on Halle Berry when she inhabits this suave octogenarian jewel thief on the big screen. Berry has her work cut out for her, though, since I doubt anyone can play Doris Payne as well as Doris Payne plays herself.

I use the words 'play' and 'performance' intentionally because even though The Life and Crimes of Doris Payne is a documentary, Payne is clearly playing to the camera with a skill for creating and inhabiting characters that she has been perfecting for years. Doris shares her art of jewel thievery with directors Matthew Pond and Kirk Marcolina in this terrifically entertaining story of her life as a career criminal. When the film begins, Doris is on trial for a theft she swears she didn't commit—why on earth would she still a lousy $8000 ring from Macy's when she has smuggled diamonds worth over 100 times that value? Doris insists her innocence, which seems convincing even though the sales clerk swears that an eighty-year-old black woman walked out of the store with the ring in question.

Her judge likens her to The Terminator, but this petite, eloquent, and attractive lady looks like she's about to serve a plate of cookies and tell you a story. It's easy to believe Doris as she maintains her innocence while explaining her past crimes to the filmmakers. No woman with such a checkered past would dare face a jury, right? Confidence and cunning, however, have always been the key characteristics that have set Doris apart from petty criminals. She is a woman who steals with purpose and style. Doris is a smooth operator. She is composed, articulate, and personable. How can this sweet old lady have a 2000 page FBI profile that lists 32 aliases, 10 dates of birth, 11 social security numbers, and 9 passports?

Doris’s story begins with her days as a poor black girl growing up in segregated West Virginia. Doris recalls her family life as troubled, since her father abused her mother and the politics of the time didn’t make the view outside the Payne’s house any prettier. If not for the racial politics of America, Doris might have found a calling other than being a jewel thief. She could have been a model or an actress, but both occupations are certainly roles she played in the job that made her famous.

It’s easy to sympathize with Doris as she explains the logic behind her first theft. She was still a teenager when she walked into a local store to buy herself a reward for a recent accomplishment. The friendly clerk was happy to oblige and he showed Doris a fine display of pretty jewelry; however, Doris notes that the clerk scuttled away immediately when a white customer walked into the store. Doris was left wearing a gold watch because the clerk didn’t want to be seen helping a black girl. Incensed and embarrassed, Doris walked to door and gave the clerk a “Says you!” She returned the watch, but she learned how easily she could make off with such goods with the right moves and the right attitude.

As Doris elaborates on her cunning ways that allowed her to steal precious jewels from all over the world, her testimony reveals a complex moral logic behind her crimes. Her rationalization that the bitter racism of the times worked to her advantage offers a unique insight into the mind of the criminal. If Doris wasn’t given a fair chance at life as an African American woman, was she really out of line for working outside the rules to better herself? One could easily say yes, but Doris’s explanation of how she succeeded in conning so many folks emphasizes how frequently race seemed to be a factor. A large part of Doris’s role was presenting herself so that store clerks and security guards saw only a beautiful woman who was well-dressed, well-spoken, and well-mannered. It was hard to steal if a clerk was hesitant to demonstrate jewels to a poor-looking black girl.

The Life and Crimes of Doris Payne crosscuts between Doris’s account of her checkered past and the proceedings leading up to her present-day trial. As Doris and her lawyer establish a decent case for her defense, though, it seems that Doris’s notorious past is bound to convict her in a courtroom. Can the guilt of someone’s past outweigh the innocence she maintains in the present? Doris is utterly unrepentant for taking the property of others. Her only regret is that she was caught. “But I was never caught in the act!” Doris is quick to proclaim.

But one can see why Doris opted for a jury trial. She is a masterful storyteller and a convincing, charismatic person. She’s easily the most fascinating subject of any film I’ve seen at Hot Docs this year. Doris displays the range of mannerisms and nuanced delivery with which a great actress brings a fictional character to life. As Doris demonstrates the gestures, comportment, and elements of manipulation she would use to pull off a heist, her body language and magnetic personality pull you into her game. (Her account of the Monte Carlo caper is especially engaging.)

The Life and Crimes of Doris Payne builds a fascinating character study by complementing Doris’s testimony with interviews with her children, her closest friend (a hoot!), biographers, and investigators on the present-day case. Pond and Marcolina also recreate episodes of Doris’s caper days using stylish re-enactments. All the different elements of the puzzle only add to the enigma of Doris’s character. The Life and Crimes of Doris Payne does a commendable feat of situating the audience within the psychology of a career criminal. Pond and Marcolina’s interwoven character study lets Doris present a compelling defense for her present predicament. Her insistence on her innocence also allows the audience to experience Doris’s deception first hand: by the end of the film, one realizes that Doris is pulling a con. However, even though Doris has built a life on duplicity, I found myself rooting for her all the way. She's the sweetest career criminal you will ever meet.

The Life and Times of Doris Payne screens:
Wednesday, May 1 – 1:30 pm at Cineplex Scotiabank