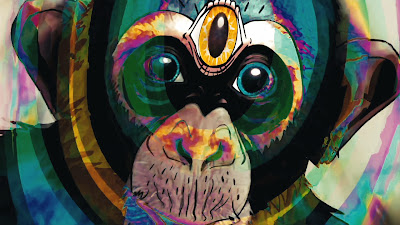 Oh, the midnight crowd at Hot Docs is going to love this one! Sick Birds Die Easy might be in the running for the gonzo prize of the festival. This fucked-up documentary by Nicholas Fakler, whose previous film is the geriatric love story Lovely, Still, is a feverish acid trip through the lunatic fringe.

Fakler embarks on a wild adventure to the jungle of Gabon, Africa in search of an herbal remedy for drug addiction. The plant, iboga, is said to cure dependency. An expert in the film’s preamble notes that it can cure cravings for heroin with a single dose. Iboga, the expert also notes, is a hallucinogenic drug itself. To little surprise, the side effects of iboga make it illegal in America.

Fakler therefore assembles his drug-addled friends to make a trip to Africa and sample the drug. A colourful (very colourful) cast of characters crosses the ocean and embarks on a trek through the dense jungle. The rehab journey of Sick Birds Die Easy is indescribably weird. Whether it’s the effect of the Bwiti mysticism in the land or the influence of the non-stop flow of pot, acid, and OxyContin (I suspect it’s the latter), the friends’ journey seems like something that Hunter S. Thompson could only imagine in a fever dream.

Especially strange—and most in need of the healing journey—is Fakler’s friend Ross, whom Fakler describes as a character “lost in the Garden of Eden with the Devil and God.” The opening credits also introduce Ross's occupation as "paranoid drug addict". The citation is appropriate, since Ross’s most lucid moments offer acid-tinged tangents—if not polemics—that provide un-pc conspiracy theories about 9/11, Israel, and extraterrestrial veggies. Thanks to Ross, Sick Birds Die Easy is unscripted gold.

This character driven story is a wild adventure. Fakler et al take the strange premise to uninhibited extremes and show the audience the fringes of both addiction and recovery. The drug-induced trip down the rabbit hole is made even more fantastical by some trippy visuals and existential musing. The animated “stoned ape theory” sequence should do for Sick Birds what “Everytime” did for Spring Breakers.

One could see Sick Birds much like the Harmony Korine film and take it all as an hour-and-a-half of first world problems run amok. It’s easy to see how a viewer might be repulsed by the friends’ ignorant appropriation of foreign culture or by one crewmember’s intoxicated rant against capitalism that ends with him burning a wad of money in front of their African tour guides. Murphy’s Law follows the friends all the way to the jungle, though, as their stickiest situation occurs when they wake up to find one of their jungle guides lying dead and cold on the ground. How many American tourists does it take to kill a travel guide?

Sick Birds Die Easy is one of those documentaries, like last year’s Despite the Gods, that gets better and better as the subjects find themselves further off course. “This isn’t the film I intended to make, but I enjoyed it just as much,” Nicholas observes in voiceover. Sick Birds Die Easy becomes less about the quest for iboga and more about the effects that drugs and addiction have over one’s body and mind, and, more seriously, one’s relationships. The group tests the limits of their friendship by seeing how many pilfered dubies or close-ups are too much.

It would be far too easy simply to write off Sick Birds Die Easy due to the misadventures of the group. Fakler isn’t afraid to depict his friends with a critical eye. (See, for example, a scene in which Ross demonstrates the health benefits of hydrating and washing with his own urine.) Portraying the quest for the iboga plant as something akin to “humanity’s apocalypse,” Sick Birds Die Easy is fully aware that the actions of the guerrilla-druggie filmmakers create some appalling shit. Even the film’s final dabble in the Bwiti rituals underscores how much the Americans miss the point of the foreign remedies. Tatyo, a Frenchman living in Gabon whom Fakler describes as “like a clown on acid” (there’s a pet name for everyone), shakes his head at Ross’s attempt to cure himself with the potency of the iboga. Tatyo decriesRoss as a typical Westerner who misses the symbolical elements of the healing process. This Lord of the Flies adventure ends with a rude awakening for the West.

Much like Piggy’s conch, the druggy vibe that gives the friends power doesn’t last forever. Even in the search for sobriety, they make plans to consume a baggie’s worth of acid. By the end, though, the consequences of their self-destructive lifestyle seem clear after a few foolish days of trouncing about in the mud. Sick Birds Die Easy, for all its bizarre self-indulgence and white privilege run amok, is an insanely entertaining head-trip. It also makes a pretty good case to introduce the iboga plant to the West, if only to prevent future assaults by drugged-out tourists who get lost in the jungle whilst playing Blair Witch. If there was ever a film to capture what happens to your brain on drugs, I suspect this is it.