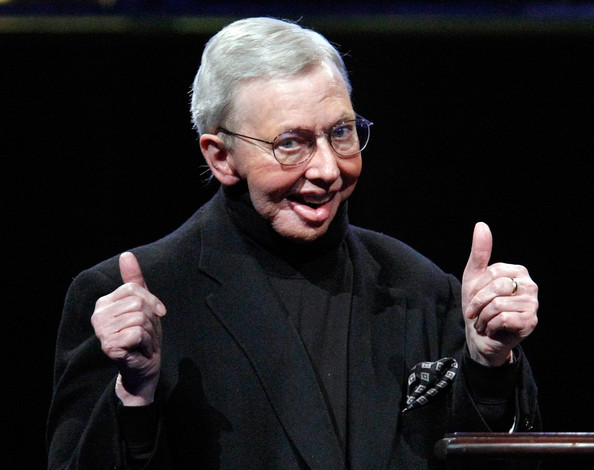 Film buffs everyone should mourn the passing of Roger Ebert. It’s sad to see the best, most influential critic roll the credits. Ebert died today after a long fight with cancer. He was 70.

Ebert’s death comes a bit of a shock since it was only recently that he announced on his blog that he would be taking a “leave of presence” from the Chicago Sun-Times where he reviewed films since 1967. Ebert’s presence will surely remain in the legacy he left behind for film criticism. His trademark “Two thumbs up,” which he developed on the TV show “At the Movies” with fellow critic Gene Siskel and continued with Richard Roeper after Siskel’s passing in 1999, has long since became a cultural idiom for endorsement. Ebert’s impact goes beyond one-digit yay or nay reviews, though, as his engaging, highly readable reviews made film criticism accessible for a general audience and helped widen the viewership for alternative films and hidden gems.

I first took a keen interest in Ebert’s views while watching Ebert & Roeper on TV. I had been familiar with Ebert’s columns and endorsements beforehand, but it was watching his show that I really took a greater interest in reviewing films. Growing up as a twin of a fellow movie buff, people (relatives especially) would compare my brother and I to Siskel and Ebert since we both loved movies, but rarely agree on what we like. I’d say that our tastes have  evened off some what, but we still like to bicker.

Part of the appeal for Ebert’s criticism for me was the repartee he had with his fellow critics. It seemed like half the fun was disagreeing on a film, and then chatting it over to find some common ground or piece of value that could be agreed upon regardless of whether one liked the film, even if the nicest thing one could say about the movie was that it made everything else seem much better by comparison. The same could be said for his reviews, since they always made for a good read even if you disagreed with the final verdict.

It’s hard to say much about one of the people who inspired you. Instead, I’d rather pay tribute to Roger Ebert by sharing my personal favourite of his reviews. It’s his review of Patty Jenkins’ 2003 film Monster, starring Charlize Theron in her Oscar-winning role. His praise for Theron’s performance is one of the most persuasive bits of writing I remember. I hadn't revisited this review since reading it upon its first publication (and watching Ebert's enthusiasm for the film on his show), but I can't help but see some of the well-crafted criticism (especially regarding the performance) that reveals his ability to draw out considerable strengths and details from a reading of a film. The greatest thing about Ebert’s review for Monster, however, is the genuine sense of excitement one gets from reading his passion for the film. This review conveys that thrilling sense of discovery one has when an unsuspecting film blind-sides you and all you want to do is tell everyone to go see it. A love for cinema can often leave a critic tongue-tied, but Ebert often put it best:

I confess that I walked into the screening not knowing who the star was, and that I did not recognize Charlize Theron until I read her name in the closing credits. Not many others will have that surprise; she was just honored as best actress of the year by the National Society of Film Critics. I didn't recognize her -- but more to the point, I hardly tried, because the performance is so focused and intense that it becomes a fact of life. Observe the way Theron controls her eyes in the film; there is not a flicker of inattention, as she urgently communicates what she is feeling and thinking. There's the uncanny sensation that Theron has forgotten the camera and the script and is directly channeling her ideas about Aileen Wuornos. She has made herself the instrument of this character…

Aileen's body language is frightening and fascinating. She doesn't know how to occupy her body. Watch Theron as she goes through a repertory of little arm straightenings and body adjustments and head tosses and hair touchings, as she nervously tries to shake out her nervousness and look at ease. Observe her smoking technique; she handles her cigarettes with the self-conscious bravado of a 13-year-old trying to impress a kid. And note that there is only one moment in the movie where she seems relaxed and at peace with herself; you will know the scene, and it will explain itself. This is one of the greatest performances in the history of the cinema.

RIP Mr. Ebert. I bet you and Siskel have lots of screening notes to compare.