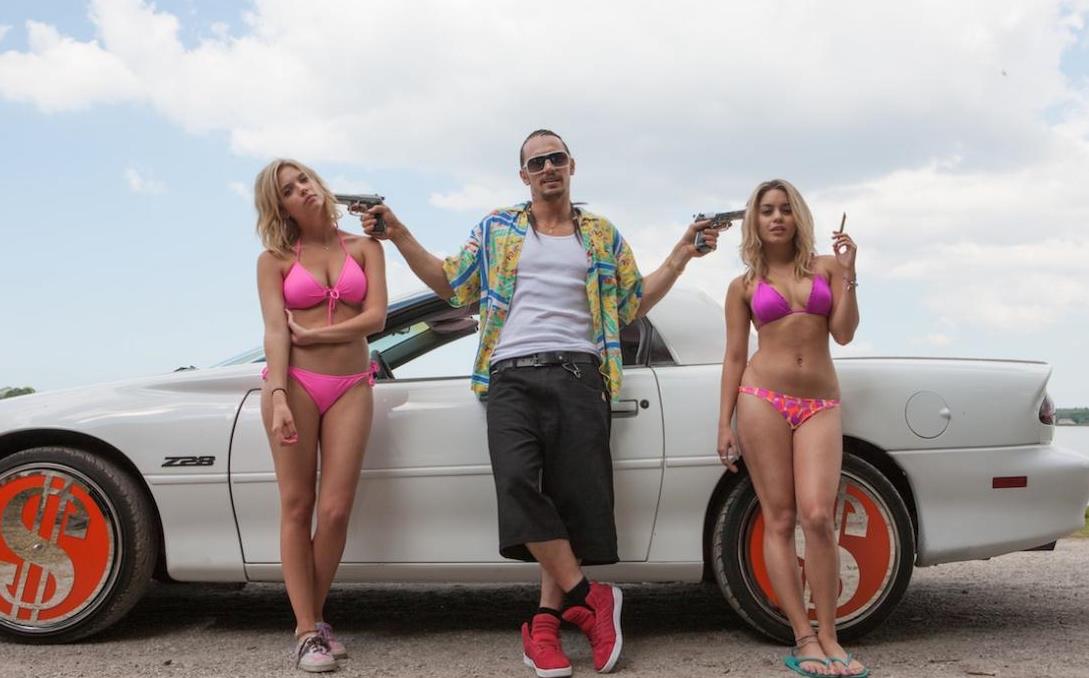 The opening scene of Spring Breakers introduces a no-holds-barred satire. A group of rambunctious college students parties it up on the beach of some anonymous tropical paradise. Gratuitous tit shot upon gratuitous tit shot comes together to form a double-D montage of juvenile excess. Boobs jiggle and booties bounce. Frat boys smack their bitches in the sand. They whip out their beer bottles and let the beach bunnies get drunk on the Bud Lite that pours their phallic fountains. These kids are the future of America; hence, America is fucked. Spring Breakers astutely makes its point within this scintillating prelude: it’s hard to grow up when you’re white and privileged.

The disappointing Spring Breakers easily gets the prize for most overhyped film of the year. It’s messy, annoying, pointless, and dull. This is not a good movie.

Spring Breakers never excels beyond its opening statement. What follow are ninety-odd minutes of ironic debauchery as a quartet of sexy co-eds (Selena Gomez, Vanessa Hudgins, Ashley Benson and Rachel Korine) let loose south of the border. The girls, burdened by their boredom with campus life, decide to knock off a fast food joint so that the work of people less privileged than themselves can pay for their hedonistic holiday. Korine has lots of fun satirizing these spoiled brats as they go from one binge-drinking party to another, but Spring Breakers plods on a meandering loop as the girls, especially Faith (Gomez), try to find themselves amongst the douchebags and libertines celebrating spring break. The surreal, repetitive odyssey is like a bad case of the spins or a parent’s worst nightmare.

A lot of the thrill relies on the novelty of seeing some of the stars playing against type. Some of the young actresses, however, can’t carry a film by themselves, although Spring Breakers does improve considerably once Selena Gomez exits the picture. James Franco, on the other hand, brings Spring Breakers up to a whole new level with his hilariously ‘out there’ performance as a life-long spring breaker cum surfer-thug named Alien. Playing the gangsta with cornrows and a trailer-trash accent, Franco is very funny here. It’s probably his best work since 127 Hours. His put-on inflections on lines like “Look at all ma’ shiiit” and “sHorts, ah got sHorts… ev’ry diff’rent colour” brought in-house quoting from the rowdy audience. Spring Breakers is clearly the kind of film that’s either going to become an instant favourite or grow considerably more irritating as it goes along.

Franco’s epic performance almost makes the idiosyncratic kookiness of Spring Breakers work. The first time he delivers his already classic line “Sprang brayyyyhk, sprang brayhk fo’eva!”, Spring Breakers seems like it’s going to be one non-stop party with a purpose. When Korine repeats the line about a dozen times on the soundtrack, however, Spring Breakers feels like an unwelcome guest that just won’t leave. I really wanted to go along for the trippy ride of Spring Breakers, especially when Franco leads his posse of gun-totin’ bitches in a group serenade of Britney Spears’ “Everytime,” but the film never really comes together. It’s too tedious and uneven to embrace. Watching an hour-and-a-half of sordid behaviour isn’t all that fun when it’s soaked more in pretension than in tequila.

Korine even does a heavy bit of moralizing with his exaggerated satire. Spring Breakers acts all rebellious, but it actually conveys a conservative and sanctimonious portrait of alienated youth. Spring Breakers is a bunch of high-falutin’ finger-waving that masquerades as an unruly middle finger. The film presents all the young adults who try to exit the pleasure-seeking rampage as whiny and weak. Faith, for example, doesn’t want to become one of Alien’s molls and the film portrays her as a shrill quitter, as someone not cut out for Neverland. Alien’s glorified mob of bikini-clad Barbies, who pack heat and get it on in the pool, comes across as a pair of tragic heroines.

Spring Breakers tries to be a gonzo all-out rager, but it results in something like an annoying hipster noir. The film doesn’t offer anything that wasn’t already revealed in, say, The Real Cancun, but while the 2003 “documentary” was universally trashed, Spring Breakers gets a round of cheers if one is willing to overlook sloppy craftsmanship, bad acting, and meandering lecturing. One could also claim intentionality on this entire opus of self-indulgence, but The Real Cancun was exactly the kind of co-ed decadence it wanted to be and it was rightfully panned.

The party’s over. Grow up. See something else.

Spring Breakers is currently playing in Ottawa at World Exchange Empire 7 and Empire Kanata and in Toronto at Cineplex Yonge and Dundas.