(Canada, 95 min.)
Dir. Jeff Renfroe, Writ. Pascal Trottier, Patrick Tarr, Jeff Renfroe, Svet Rouskov
Starring: Kevin Zegers, Laurence Fishburne, Bill Paxton, Charlotte Sullivan.
The Colony is the Paris Hilton of Canadian cinema. It has an attractive shell, but it’s dead on the inside. The $16 000 000 hopeful cash cow certainly looks impressive, yet one hopes that some of the money could have gone towards a better script. One wishes The Colony was something to rave about since it would be nice to have a decent mainstream moneymaker to give Canucks a jolt. It’s all so dead-on-arrival, though, that local audiences could feel reaffirmed that Canadian movies are “boring” and not worth their money when Michael Bay gives them more bang for their buck.

The Colony, a post-apocalyptic thriller-cum-gorefest, takes audiences to the frosty lands of 2045. Set in an anonymous tundra—it could be Canada with all the snow—The Colony sees a group of survivors endure the second Ice Age in an underground shelter known as Colony 7. Colony 7 is led by Briggs (Laurence Fishburne), a burly man with a pragmatic sense for keeping everyone alive.

Briggs assumes a mission away from the colony in order to answer a distress call from Colony 5. He requests that two youngsters, Sam (Kevin Zegers, Transamerica) and Graydon (Atticus Dean Mitchell), accompany him on a survival mission. Briggs leaves Sam’s girlfriend, Kai (played by Edwin Boyd’s Charlotte Sullivan), to man the fort, which angers his hotheaded second-in-command Mason (played by Bill Paxton). What could go wrong? 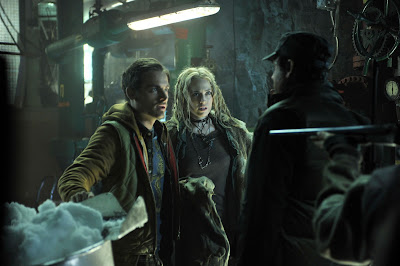 Briggs leads Sam and Graydon on a trek akin to a snowshoe voyage of The Road. Along the way, they encounter snowdrifts, bloodthirsty cannibals, and Bucky Haight. The trio of colonists are in a fight for survival, but one can hardly be moved to care since The Colony plays like a ninety-five minute montage of blood, gore, and stupidity. The film speeds at such a rapid pace that viewers won’t feel any connection to the characters or to the story. As a result, there’s little suspense—or entertainment value—to all the senseless action playing out onscreen. Even the film’s one legitimate plot twist is undercut because one can hardly be moved to notice the death of a central character. “Oh, that happened,” bored beavers will probably say.

Even the spectacular production value of The Colony must be viewed with disinterested detachment since special effects can’t carry a film on its own. The Colony boasts some of the most impressive visuals and technical work I’ve seen in a recent Canadian feature film. Equally noteworthy is the film’s atmospheric use of location, as The Colony was shot in a decommissioned NORAD army base in North Bay Ontario. The Colony is the first film ever to be shot in the underground base “The Hole”, which was nicknamed by military personnel during the Cold War after it was built in 1963. Playing out sixty feet below the Earth’s surface, The Colony certainly looks creepy. It just never feels creepy.

Even the visuals and the atmosphere do little to further such a thin script. One can’t help but remember another recent snowy sci-fi Canadian production, Frost, which made exceptionally better use of cinematic imagination and cunning allegory. The chilling greenscreened landscapes of Frost vastly eclipse the visual effects of The Colony, and the former film packs more story in thirteen minutes than the latter does in ninety-five. Frost uses visuals to accentuate a great film; The Colony uses a gimmick to mask a bad one.

Nothing at the heart of The Colony seems to beat. Even the Hollywood actors seem to be lazing, as Fishburne is merely OK in the role of valorous Briggs, but he brought more range to most episodes of CSI. Paxton, on the other hand, is painfully unwatchable—he looks as if the chilly Canadian North has frozen his acting skills. Suck it up princess: buy some Hot Rods and get the job done.

The films two Canadian stars, Zegers and Sullivan, perform better in their limited roles. The Colony isn’t really an actors’ showcase, though. They mostly get to point, shoot, and run.

The Colony seems to be a dying breed of Canadian genre films that confirm to us once again that we simply can’t churn out the moneymakers that Hollywood can. I’m all for commercial Canadian films (see: Barney’s Version or Goon), but one can’t help but note how many superior projects could have benefited from The Colony’s resources. The Canadian film market is essentially left with a few nuggets tucked away to remain hidden or, hopefully, to enjoy healthy runs on single screens in Toronto, Vancouver, and Montréal, while audiences all over the country are stuck with fool’s gold. Why not let more audiences talk about a Canadian film that’s actually worth seeing? Audiences generally know a stinker when they see one, so poor word of mouth can’t carry a slick Canadian film through a theatrical run. Why spend so much on a VFX film that's barely worth watching on Netflix?

It’s baffling that so much talent and money was sunk into the film when the main problem—the script—was there from the start. The snow-laden colonial setting has the guise for an arty allegory on global warming and consumption, but the zombieland bloodfest feels tacked on from a bad rewrite, and The Colony thus falls short on both ends. Even local content isn’t reason enough to champion this film. And I say this as someone who recommended House at the End of the Street.

The Colony is currently playing in wide(ish) release.