The Company You Keep

Robert Redford’s latest political drama The Company You Keep takes such a story and runs with it to the end. Redford, who also stars in the film as man-on-the-run Nick Sloane, leads The Company You Keep runs more akin to a relay race as the surprisingly conventional script by Lem Dobbs (The Limey) passes the baton between an impressive team of Oscar winners and nominees. The baton is first passed off by Susan Sarandon, who is effective in the opening sequence as Sharon Solarz, a tired member of the radical group The Weather Underground who decides to surrender and face charges for a murder she was involved in thirty years ago. Sharon’s surrender inadvertently smokes her fellow radicals out of hiding.

Cue Redford’s seasoned runner. Hiding in Albany, New York under the alias Jim Grant, Nick Sloane has established a successful life as a father and lawyer. A colleague from the Underground approaches him to take Sharon’s case, but Jim/Nick declines, citing his widower status and young daughter as reasons not to re-enter the spotlight.

Sharon’s actions prompt another visitor to take an interest in Jim Grant. A young reporter, Ben Shepard (Shia LaBeouf), gets wind that Sharon sought Jim’s help in her case. Ben starts nosing into Jim’s past, despite Jim’s adamant refusal to say much, and he uncovers Jim’s double life. One headline puts Jim’s life to rest and sets Nick running like Jean Valjean.

The Company You Keep more than capably lets the baton pass from one great actor to another, as a myriad of storylines introduce strong players in relatively small roles. Many of the troupers also happen to be veteran activists, so actors such as Sarandon and Julie Christie (who is especially good) bring an added layer to the underlying tenor of political activism that fuels Nick’s mission to clear his name. 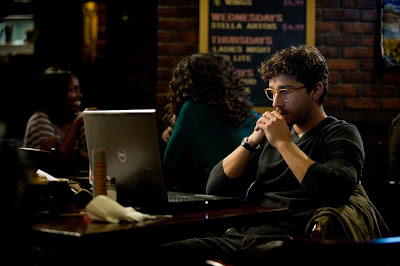 Unfortunately, though, a tired runner slows down The Company You Keep. Co-star Shia LaBeouf simply cannot match the pace of the stacked cast. LaBeouf, while admittedly giving one of his less terrible performances, almost seems out of breath when the likes of Redford, Sarandon, and Christie bring so much gusto to the screen. He’s less a leading man and more like a contagion. Some smart editing, however, saves many scenes with lengthy reaction shots of Ben’s peers, which play like chicken soup combatting the flu. (See, for example, a conversation between LaBeouf and Brit Marling that keeps the shot mostly on the latter party.) LaBeouf doesn’t destroy the film, though, since The Company You Keep lingers more on one’s connection to Nick than to Ben’s tiresome antics.

Ben likewise calls to mind Redford’s own history with searing newsroom dramas. Redford, who starred in the Woodward and Bernstein drama All the President’s Men, helped define the virtuoso storytelling that made reporters such thrilling vehicles for bringing the social issues of the world to the big screen. The Company You Keep, while more than capably made, never really rings with a clear political message. It’s certainly a film of a political nature, and the cast brings the spirit of activism to life, but there isn’t much of a provocative morale to this espionage tale that spills across America.

The film also struggles to turn Ben’s investigation into much of a thrill. Few complications arise in Ben’s attempt to uncover Nick’s story, nor does Nick hit many roadblocks in trying to evade the law and reunite with Mimi (Christie) his former ally from the Underground. Both storylines resolve themselves briskly with the two protagonists solving most of their problems via conversations with obliging peers, although several of the threads with tertiary characters leave loose ends. (Whatever happens to Anna Kendrick?)

Redford seems to enjoy being both behind the camera and in front of it so much that he lets The Company You Keep run without taking a breath. It’s an incredibly fast-paced film, but it runs from Start to Finish and jumps few hurdles along the way. What is more exciting: watching a 400-yard dash or watching a boot camp exercise that treks runners through barbed wire, mud, and other obstacles?

Thanks primarily to the strong supporting cast, which also includes Nick Nolte, Terrence Howard, Chris Cooper, Richard Jenkins and Stanley Tucci, The Company You Keep is consistently engaging as it moves at a steady pace. It won’t raise a pulse, but it shows that Redford isn’t slowing down, either. Slickly composed with a rousing score by Cliff Martinez, The Company You Keep certainly looks as good as the thrillers of Redford’s early career. The story has an unequivocal political conviction, too, so it’s just too bad that Redford didn’t cast another old pro (Dustin Hoffman, maybe?) as the weathered reporter. He’d be running in better company if did.

The Company You Keep is currently playing in select cities across Canada.