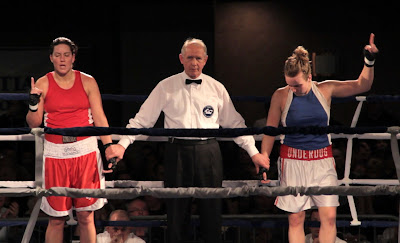 What is with Canadian filmmakers and boxing documentaries? Doc boxing is so frequent that it is almost becoming a sub-genre in our national cinema. Last year, for example, Hot Docs introduced a quartet of good Canadian docs—okay, three boxing docs and one doc about Kung Fu. All of them packed a sold punch (sorry), but the title for Canadian boxing-doc champion has officially been passed over to Last Woman Standing, which has its world premiere in the festival’s Canadian Spectrum this year. Last Woman Standing, directed by Lorraine Price and Juliet Lammers, is one of the best female-centric sports films I’ve seen since Million Dollar Baby. Frankly, it’s one of the best sports movies I’ve ever seen.


Last Woman Standing depicts a rivalry unlike any other. Teammates/friends Mary Spencer and Ariane Fortin become opponents when the Olympics introduce female boxing to the 2012 games. The announcement should be a blessing, since Olympic Gold is the dream of both boxers; however, the IOC collapses the usual weight divisions into three categories for women (men have eight) and Mary and Ariane find themselves competitors for the first time. A wedge is driven between the friends even further as the pressure mounts for the Games, as they are largely considered the top two boxers in the world. This challenge means that one friend will have to crush the dream of the other in order to end up on the top of the podium.

Mary and Ariane agree to put their friendship “on hold” until the Olympics has passed. The two former sparring partners must now set their eyes on the prize knowing that the biggest opponent knows all the strengths and weaknesses of the other. To thicken the tension further, both Mary and Ariane know that the numbers of Olympic teams leave a high probably that only one of them will actually make it to the Games. Every fight counts and the friends must face each other in virtually every crucial competition.

Mary wins the first major match in the film, so Last Woman Standing sees Mary rides a wave of funding support and sponsorship deals. Ariane, on the other hand, must now pay for her pursuit of the Olympic Dream out of pocket and work a little harder for the title for which she is equally worthy. Like a campaign for Best Actress at the Academy Awards, boxing titles are all about momentum. Mary’s early rise keeps her going throughout the period in which the film follows both athletes, and Last Woman Standing reveals how subjective sports titles can be, as one can become the favourite through factors other than strength and skill.

Last Woman Standing follows each boxer in her own narrative and gives Mary and Ariane an experience that is shared, yet unique. Mary and Ariane, however, show how a great athlete can detach herself from her relationships, using past memories to fuel her strive for excellence, but without compromising the future of her friendship. (They’re not at all like the “typical women” Mary’s trainer sarcastically dubs them in an early scene of the film.) The two stories give Last Woman Standing a dynamic seen in some of the greatest sports movies of all time. On one level, Last Woman Standing is the tale of an unstoppable warrior, as Mary is at the top of the game and finds herself closer to fulfilling her dream with each bout in the ring. On the other level, Last Woman Standing is a compelling underdog story thanks to Ariane’s relentless training and her dogged refusal to accept second place. The film leaves one rooting for both, but with the portentous sense that only one of these stories could have the happy ending sports movies tend to enjoy.

Price and Lammers smartly avoid taking a side with either fighter. Even during a contentious scoring decision do they decide to let the situation speak for itself. They simply use a juxtaposition between the two to let the audience see that both Mary and Ariane are worthy of Olympic Gold. Neither competitor takes action to fuel the rivalry—it’s more like an unspoken contract that they’ll train and compete, and get back to being friends once the Games are over—and the tension between Mary and Ariane seems to exist primarily in the media’s portrayal of their pre-Olympic energy. In addition to their laudable objectivity, Price and Lammers deliver a film that is without fault. Shot, chopped, and scored as smartly and artfully as a boxing film like Raging Bull, Last Woman Standing follows the arc of the boxers’ journey with an unwavering energy and sprightly tempo. Top marks especially go to composers Pietro Amato & Stefan Schneider, who offer one of the most effective and exciting scores of the year.

Last Woman Standing is one of the most dramatically engaging films at the festival for how intimately it captures each woman’s heart in the game. It’s do or die for both boxers, so viewers will be on the edge of their seats as they watch and see who wins and who goes home. Lean, mean, and full of heart, Last Woman Standing is a knockout.