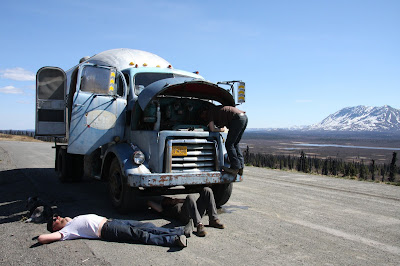 I knew I’d see at least one good old-fashioned road movie at Hot Docs this year. Alcan Highway is a cool and quirky tale for all the wanderers at the festival this year. It’s the odd tale of a Finnish man named Hese who finds himself living the American Dream in Alaska. Without a place to call home back in Europe, Hese decides to fashion life his own way across the pond by souping up a classic big rig and fashioning it into a home with the help of an old camper that looks like a space ship from 1950s TV.

Alcan Highway is a fun observational study full of quirky characters and a crowd-pleasing lust for life. (There’s also a handsome dog that often steals the show.) The journey along the highway, which takes Hese through the Rocky Mountains and into beautiful British Columbia, is accented by gorgeous cinematography and a nice minimalist score. The journey along the highway sags in some parts, though, so Alcan Highway might have worked better as a mid-length feature, as it feels awfully dragged out even at a mere seventy-five minutes. It’s a personable tale nevertheless and surely one that will inspire viewers to believe in the kindness of strangers once again. Hit the road before the price of gas makes such life-changing journeys extinct!

The Last Black Sea Pirates
(Bulgaria, 72 min.)
Dir. Svetoslav Stoyanov
Programme: International Spectrum (North American Premiere)
Sigh. I am sad to report that the Bulgarian pirate movie isn’t nearly as wild as novelty as I hoped it would be. The Last Black Sea Pirates feels like a missed opportunity given the uniqueness and eccentricity of its subjects. The pirates, who are mostly ex-cons scouring the shores of the Black Sea in search of gold, are certainly odd drunken sailors, but director Svetoslav Stoyanov doesn’t quite know what to do with gold sitting right before his eyes. For example, once scene overhears a broadcast noting that the pirates’ area faces elimination because the government has big plans to transform the area into luxury villages and a seaside resort. The potentially dramatic predicament receives only a fleeting mention, though, and we’re left watching a boring sideshow that mostly sees the pirates piss away their earnings on booze as they fish and dream of strippers. Ye best walk the plank, Pirates!

Brave New River is an important environmental doc that could hit close to home for many Canadian viewers. Director Nicholas Renaud offers a fair study of the effects of a recent hydroelectric dam on the Rupert River in northern Québec. Using some before-and-after imagery that calls to mind the effective time-lapse photography of last year’s Hot Docs champion Chasing Ice, Brave New River shows how the landscape along the Rupert River has been drained of its beauty. The water level has fallen dramatically since the construction of the dam, so it’s easy to believe the accompanying testimony about the consequences that the water shortage has had on the environment and ecosystems.

Even greater than the eco-costs are the cultural shortcomings that have been caused by the dam. Brave New River outlines how political agreements between the Cree community and the Québec government kept the Rupert River under protection. Recently, though, the Cree agreed to make some compromises with the province in order to receive the short-term benefit of jobs afforded by the construction. The Cree now see a gradual loss of their culture and traditions because the fish in the area are scarce and the land of their ancestors suffers significant change.

Renaud succeeds in doing justice to the Cree’s story, but Brave New River seems to shortchange its subject. The film is almost compromised by its attempt to remain objective, as it gives equal time to the benefits brought to the area by the construction of the plant. “Even though we’ve ruined the landscape, we at least have power and some jobs,” the film seems to say. It feels cruelly ironic when a dam employee proudly dubs the project a source of green energy. Is energy “green” when it comes at a cost of fish, land, water, culture, and heritage? Brave New River begins as a plea to save the Canadian wilderness, but it ends like a public service announcement brought to you by Hydro Québec.

Meskano – The Path sees director Debby Flamand embark on a 120 km trek with her daughter Julie as part of a traditional pilgrimage made by the Atikamekw tribe. Meskano glosses over its story a bit too quickly, and it's one of the more conventionally made Canuck shorts at the fest this year, but it shows a key cultural event for generations of the tribe in Québec while drawing out greater themes of tradition and heritage.