The river. If there was ever a place for boys to go out and explore, it’s the muddy waters. Trolling the Mississippi River in a well-used fishing boat, fourteen-year-old friends Ellis (Tree of Life’s Tye Sheridan) and Neckbone (Jacob Lofland, who makes his debut here) experience a summer on par with the downstream journeys of Tom Sawyer and Huckleberry Finn.

Neckbone wants to explore an odd sight he spotted on an island in the middle of the Mississippi. An old boat stands anchored and secure atop a bushel of trees in the midst of the isolated escape. It’s a tree fort of sorts, built especially for curious boys to discover during the freedom of the summer months. Ellis and Neckbone enter the boat—boys will be boys—and they’re thrilled to find that although the motor’s gone, the long-gone crew stowed away a healthy stack of wank mags.

It’s then that the boys also discover a fresh loaf of bread. Someone is living in the boat—a stowaway.

The mysterious stranger is more like a pirate. Appearing first as footprints—studded with an ominous cross—and then seemingly arising out of thin air, Mud (Matthew McConaughey) greets the boys as if he was waiting for them all along. Mud, on the run from the law and using the Mississippi River as a safe haven, is a charismatic river-rat. Gruff and dirty, yet well-spoken and at ease with the boys, he makes a strong impression on Ellis and Neckbone. It’s as if Mud promises the adventure the boys were looking for all along. In a way, Mud does. 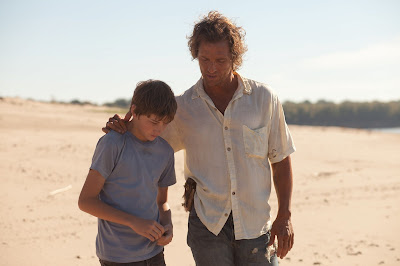 Soon after meeting Mud does Ellis learn why the man is living in a landlocked boat. En route to town with his mother (Sarah Paulson), Ellis is encounters a police blockade with cops searching cars and passing out mug shots of the man on the island. Mud is wanted for murder.

The truth about this storybook hero doesn’t taint the summer fable for the boys. Ellis and Neckbone increase their relationship with Mud, picking up spare parts like the Little Rascals so he can give the boat a fixin’. The boys become twice as interested when Mud tells them that his getaway has a fairy-tale ending, as he girl is coming to meet him.

Mud’s girl, however, is pure white trash. Played by a striking Reese Witherspoon, Juniper is a haggard looking floozy the boys first lay eyes on at the local Piggly Wiggly. (A classy dame June is not.) Their allegiance to Mud makes Ellis and Neckbone take a different interest in Juniper than do the other schoolboys of the town. They trail Juniper like a sister’s keeper, partly to protect her and partly to protect Mud, although Ellis’s interest in Juniper gets wildly muddled by his messy first love with a high school senior named May Pearl (Bonnie Sturdivant). This southern fable takes a good turn into pulp fiction. 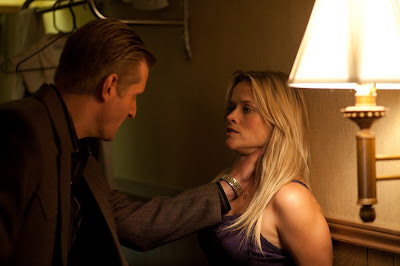 Writer/director Jeff Nichols (Take Shelter) delivers a strong southern tale that, superficially, calls to mind Lee Daniels’ deliciously trashy flick The Paperboy, which also starred McConaughey. Mud certainly has less debauchery than Paperboy does, and Nichols frames the coming-of-age tale more like a story of fraternal bonds than Daniels’ masturbatory fantasy gone wild. Both films take their young male heroes into dark places, driven by flaxen beauties with saucy tastes in men. Both films also have a strong sense of place and a commendable use of the muddy waters as a central figure of the film; however, The Paperboy is good paperback/drug store trash, which is every reason I enjoy it so much, Mud plays like a solid piece of American literature. There’s something poetic in the way Nichols captures the rolling waters in the soft fading sunlight. One can almost feel the air coming off the river as Ellis and Neckbone take one voyage after another to visit their fantastical friend.
It might be the sweet twang of the score by David Wingo that adds a breezy air to Mud. The minimal guitar riffs add to the aura of the river and to Mud’s southern flavour. Especially good are some contributions to the soundtrack by Ben Nichols (Jeff’s brother), the best of which is “Take You Away,” which appears in a memorable interlude towards the middle of the film. I still begrudge The Academy for overlooking Nichols’ theme “Shelter” from Take Shelter in 2011.

Fans of Take Shelter will surely be pleased to see Nichols’ usual collaborator Michael Shannon offer a fine supporting turn in Mud. Playing the role of Neckbone’s uncle/guardian Galen, Shannon offers one of his more understated turns in Mud. Like Witherspoon, he makes a strong impression with little screentime. (Witherspoon gives one of her better performances of late in Mud.) Shannon’s restrained performance lets McConaughey own the role of Nichols’ newest headliner. McConaughey continues his string of strong turns in eccentric challenging role (re: Killer Joe, Bernie, and Magic Mike, although I didn’t really get the hype over the latter) and offers a captivating performance as Mud. Mud is intimidating thanks to McConaughey’s screen presence, but the actor’s Southern drawl lets the audience see the outlaw on the same friendly terms that the boys do.

McConaughey is an imposing presence in the title role, but Mud really belongs to the two young actors playing Ellis and Neckbone. Those who saw Tree of Life while doubtlessly remember the presence of the boys playing the sons of Brad Pitt and Jessica Chastain, and Tye Sheridan makes a noteworthy transition from supporting player to lead with his impressive performance as Ellis. Sheridan enjoys an especially challenging role, as Ellis also grapples with the traumatic separation of his parents and unwarranted pressure from his father (Ray McKinnon), which add to the burden of keeping tabs on Mud, May Pearl, and Juniper.

Lofland, on the other hand, makes his screen debut with Mud and he’s just as good here as Sheridan was in Tree. Neckbone seems a bit more rooted than Ellis does in spite of his unconventional family, yet Lofland brings an equally good arc to his character as Neckbone plays the trusty guardian of Ellis. Unlike Ellis, Neckbone can detach his affection for Mud from his judgement of the strange character. The power of the two young leads testifies to the strength of Nichols’ overall direction of the film, for Mud displays a full immersion in the lore of the American south: Sheridan and Lofland play like an extension of Tom and Huck.

Nichols, who previously pulled a stunner with the enigmatic Take Shelter, shows with Mud that he is indeed a serious talent. Mud might not exceed Take Shelter, but it’s every bit as good. While Mud doesn’t have quite the same palpably symbolic ambiguity as Shelter does, there’s a supernatural richness to the natural wonders Nichols employs in his frame. There’s no need for errant birds or acid rain when the river is a powerful presence in itself. Mud is a classic southern fable.

Mud is returns to Ottawa screens at The Mayfair beginning July 26.