We Drink to Forget. 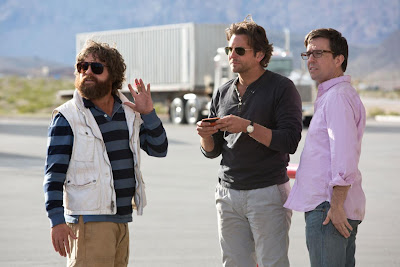 They say the cure for a hangover is to start drinking. Pour the boys a round, for they've managed to take one of the funniest, raunchiest comedies of the past decade and turn it into a bad case of coyote ugly. We all got drunk on the Wolfpack’s goofy debauchery in the original Hangover, but this once funny franchise has overstayed its welcome like the nausea that comes the morning after a night of hard drinking. The Hangover Part III is a textbook example that no formula exists to make a good franchise.

The surprise Golden Globe winner The Hangover had a good run in 2009, but it ran out of steam shortly thereafter and passed on. Director/co-writer Todd Phillips et al tried to race again with The Hangover Part II. One could, as many a viewer observed, literally play Hangovers I and II side by side and see little difference. The sequel, fun as it is, is a classic case of “rinse and repeat” in which the audience knows a half-assed cash grab when they see it. The dead horse had been aptly beaten since the Wolfpack’s last outing and said horse is beginning to collect flies. The third retread of The Hangover just plain stinks.

The Hangover Part II suffered mostly from its sense of déja vu, so Phillips and the boys of the Wolfpack deserve credit for trying to deviate from The Hangover’s golden formula in an attempt to give audiences something that’s both familiar and new. No binge drinking transpires in The Hangover Part III (although you might be running to the bar once it's over.). There are no saucy hookers, no Mike Tyson tattoos, and no phone call framing devices. The Wolfpack is back for a third run and the twist is that they’re… boring?

Phil (Bradley Cooper, not quite in Silver Linings Playbook territory with this one), Stu (Ed Helms) and Alan (Zack Galifianakis) find themselves on a kooky mission to retrieve the gold that was stolen from a larger than life crime lord named Marshall (Argo's John Goodman). Marshall is holding the fourth member of the Wolfpack, Doug (Justin Bartha), hostage lest the boys return with his precious metal. The sequel convolutedness comes full circle when Marshall explains that the gold was stolen by Hangover antagonist Chow (Ken Jeong). The boys must find Chow and trade him for Doug.

Chow’s increased presence in the film screams how badly this franchise is showing signs of strain. The goofy Asian provided some of the best zingers and some of the most hilariously outrageous moments in the first two installments, but he is insufferably annoying when he’s expanded beyond the role of a bit player. He’s like that friend who keeps repeating the same lame joke because you laughed the first time.

The same goes for Alan or perhaps for Zach Galifianakis in general. The crazy man-child with the bushy beard is a great vehicle for meathead situational humour, yet there’s nary a time in Hangover III in which Zach G.’s shtick doesn’t feel forced. The audience knows it’s in trouble when The Hangover Part III introduces Alan rocking out to “Mmmbop” before he decapitates a giraffe. Chow and Alan were two of The Hangover’s most special ingredients. It’s disappointing that they both taste so stale.

The original film’s other extra kick came from a loony turn by Heather Graham as a Las Vegas escort who married Stu during the Wolfpack’s first bender. The second film suffered greatly from Graham’s absence—her exclusion from the sequel was my biggest complaint about Part II—and she appears in a quick cameo in Part III to help pull the franchise together. It’s a brief but welcome attempt to recreate some of the spark of the first film.

New to the franchise is Melissa McCarthy, the reigning queen of obnoxious comedy, who one-upped the Wolfpack with Bridesmaids. Offering one of the few legitimately good laughs of the entire film, McCarthy plays a lady equivalent to Alan that the group meets while tracking Chow. It’s too bad that she doesn’t go along for more of the ride, but she returns for a hilarious bit during the end credits, which might be the only sequence that provides the kind of raunchy humour that catapulted The Hangover to comedic gold.

It’s best to leave winners untouched. For every Skyfall and The Dark Knight Rises, or even Fast 6, a Hangover Part III ends a hot ticket on a low note. The Wolfpack just doesn’t provide the same laughs they delivered the first time. You’ll drink to forget The Hangover Part III.

The Hangover Part III is now playing in wide release.