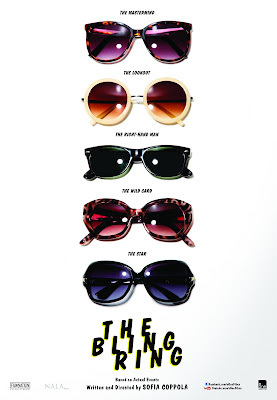 Any Sofia Coppola fans here at Cinemablographer? I hope so! The indie auteur is back and fresh off the Croisette with her latest film, The Bling Ring. The Bling Ring, starring Emma Watson (The Perks of Being a Wallflower), Leslie Mann (This is 40) and Taissa Farmiga (Higher Ground), shows a group of teenagers obsessed with fashion and fame who burglarized the homes of celebrities in Los Angeles. Tracking their targets’ whereabouts online, the teens would break-in and steal designer clothes and possessions. Reflecting on the naiveté of youth, amplified by today’s culture of celebrity and luxury brand obsession, the members of the Bling Ring introduce us to temptations that nearly any teenager would find hard to resist. What starts out as youthful fun spins out of control and reveals a sobering view of our modern culture.


Thanks to our friends at eOne Films, we have five (5) double passes to giveaway to the Ottawa sneak peek of The Bling Ring. All you have to do to win is answer the following question:

The Bling Ring is a biting satire on our obsession with celebrity culture, so let’s test your knowledge of the stars. Which previous star of a Sofia Coppola flick is spotted by the members of the Bling Ring in an LA hotspot?

Need a hint? Watch the trailer below!

The Bling Ring opens in Ottawa June 21 from eOne Films.