'The Guy who Knocks' 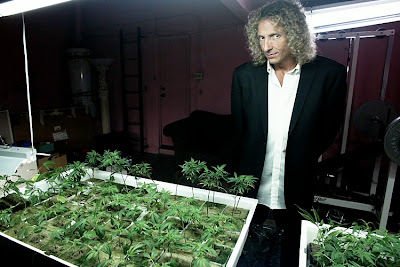 There’s only one season left of Breaking Bad, so entrepreneurs who want to get rich or die trying need some schooling if they want to be the next Heisenberg. As any follower of the exploits of Mr. Walter White knows, it’s a tough process to go from minor player to Kingpin. Or, as the bald man in the pork pie hat might say, it takes a lot of work to go from fearing the knocks to being the guy who knocks. If you want to be the danger, you have to learn how to make money selling drugs.

Matthew Cooke’s surprising documentary How to Make Money Selling Drugs might let moviegoers/TV buffs embrace their inner Heisenberg, but this film really takes more of a cue from cable’s other critically acclaimed drug-run series, HBO’s The Wire. Offering several snippets of David Simon’s streetwise series, Cooke reminds viewers of the pivotal chess game that got them hooked on the HBO show. The drug trade is all a game of pawns and kings. There are rules and strategies, but there is inevitably only one winner.

The film takes the form of a DIY tutorial as it explains the ins-and-outs of the different roles. After all, one can only graduate from being a pawn to being a rook after completing the tasks that bump one up to the next level. Cooke gains impressive access to a variety of players from the drug game. Dealers, distributors, kingpins, and even 50 Cent reveal how they graduated from high school joint seller to grower, to being at the top of the trade.

How to Make Money Selling Drugs, produced by Bert Marcus and executive-produced by Entourage's Adrian Grenier, lifts the tried-and-tested form of an old-school instructional video. Cooke narrates this funny film in a dry deadpan that recalls the voice-of-God speakers who taught kids how to do this and that during high school. The documentary omits all the scary effects of drug use that teachers and parents used to instruct youngsters to "Just say no". The point that Cooke makes, however, is that the drug industry is essentially a business like any other. One needs to learn the risks and rewards, and understand questions of supply and demand, if one ever wants to make it big. Pot, for example, offers enough of a profit to make a decent living, but if one ever wants to live the high life like Tony Montana, the money lies in harder drugs like coke.

Guns, hired goons, and a hand in the heat’s pocket help one play the game more smoothly. As Cooke reveals through his interviews with past and present players, the drug trade is essentially a game for which neither side has well-defined rules. Omar and the po-po’ are equally big fish to fear.

How to Make Money Selling Drugs takes an unexpected turn as it reaches the top levels of the game. The film graduates from being a sardonic instructional video to a cutting exposé on the meaninglessness of the war on drugs. Busting dealers and raiding grow-ups does little when the government fails to explore the social conditions—poverty, unemployment, etc.—that might encourage and enable the drug trade in the absence of  aid and equal opportunity. Moreover, as the experiment with Amsterdam revealed during Season 3 of The Wire, the worst consequences of the drug trade stem from the illegality of the business. Lawlessness among the players encourages cheating and violence, while youth might be attracted to gateway drugs through novelty and comparatively easy access.

Cooke continues to interview the various figures from the drug trade, only now they reveal the run-ins with the law they encountered on the road to wealth. The players all stress the inevitability of a bust, but many of them note a flagrant air of corruption to the legal pursuit of the war on drugs. Even one participant explains how he went from being a gung-ho law enforcer to a self-help guru who made a business out of selling the secrets the law uses to catch dealers.

It becomes clear in How to Make Money Selling Drugs that the top player in the drug game isn’t Walter White, or Stringer Bell, or some wealthy Colombian drug lord living a continent away. Uncle Sam rules the game, except that the American Government controls the trade so that it results in a loss for all involved. As the players, plus lawyers, politicians, and personalities like Susan Sarandon, Woody Harrelson, and Eminem all explain, the pendulum of the war on drugs has swung so far that it’s out of control. Billions are spent to fight drugs, but drug use and drug-related arrests are on the rise. Moreover, the law can’t keep up with the power of the cartels, so minor-level Americans—and sometimes innocents—are caught in the crossfire of mandatory minimum sentences and arrest quotas. As Sarandon notes, mandatory minimums put marginal parties in jail for as long a sentence as murderers receive. (The cause was similarly taken up in Snitch, the action/thriller in which Sarandon co-starred with Dwayne Johnson.) How makes America’s war on drugs look like the nation’s biggest self-made mess since Vietnam.

The drug business is a funny game, so Cooke smartly provides a cocktail of satire and seriousness. Viewers will be hooked on the novelty of the conceit by the time How to Make Money Selling Drugs asks the hard questions. Is decriminalization the key? Why are drugs such as risky business when substances like alcohol and tobacco take more lives and result in more danger? (The number of alcohol-related crimes and injuries surely eclipses the number of drug-related incidents.) Regulation, taxation, and propagation are perhaps the key elements when it comes to making money selling drugs. Are the man in danger and the man who knocks one and the same?

How to Make Money Selling Drugs opens in Toronto at The Varsity June 28.