'The East' a Wake-Up Call for the West 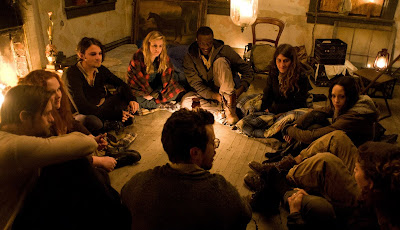 The West seems to have it all. The countries on this side of The Prime Meridian have a sizable share in the wealth, power, and privilege of the world. One percent of the population wields more influence than the other ninety-nine. Fortunes are made, empires are built, and profits soar for some, while others lose. Such powers come with equal responsibilities, though, and the majority might not always remain silent as it sits and deals with a mess that allows few to prosper.

This philosophy drives a radical group dubbed The East in Zal Batmanglij’s new political thriller. Like the well-intentioned efforts of the ninety-niners, the overall objective of The East is never entirely clear, for they’re not solely eco-terrorists as the marketing for the film suggests. Nevertheless, The East has a political consciousness that provides a thriller with ample resonance. The East, an anti-corporate espionage pic, is consistently compelling since the mission of its undercover agent (Brit Marling) hits close to home.

Marling, reteaming with her Sound of My Voice director, stars as Sarah, a pseudo-spy who works for private enterprise rather than for Lady Liberty. Employed by an eerie security firm that protects corporate suits by spying on potential radicals, Sarah sets off to infiltrate The East as a keeper for the gated communities of the wealthy few. Sarah’s boss, Sharon (played by the consistently great Patricia Clarkson), has ample confidence in her ability to show off the firm’s assets and gain new clients by sleeping with the enemy. The physical resemblance between Sarah and Sharon is striking: Clarkson could be Marling’s mother, although it seems as if the steely Sharon isn’t the maternal type. Sarah looks to have been bred into a family that serves to protect its own interests.

Sarah, likewise, seems prim and proper, like the girl next door. She prays, wears a cross, and licks her fingers as she eats McDonald’s. Is she The East’s worst nightmare?

Her infiltration goes surprisingly smoothly, however, as she befriends a member of The East, an androgynous outcast named Luca (Shiloh Fernandez), who takes her to the rebels’ lair. The East's compound is a grungy hippy commune run by a Charles Manson looking leader named Benji (Alexander Skarsgard, What Maisie Knew). Sarah is put to through tests and scrutiny before her she convinces the members of The East of her devotion to their cause. The assessments are like a hazing ritual and as much a trial of Sarah's allegiance to her corporate oath as they are proof of her aptitude to blend with the group.

As Sarah helps The East execute their first mission since her appearance, she takes careful note of the conviction that Benji, Luca, and their comrades Izzy (Ellen Page) and Doc (Toby Kebbell), bring to their cause. Dropping doses of drugs into the champagne flutes of wealthy pharmaceutical execs is a radical way to give them the upper crust a taste of its own medicine and let it feel the side effects of their drugs. Sarah’s analytical mind, however, takes her mission in another direction.

The East seems to have a noble philosophy, but the members’ radicalism looks to be just as bad as the corporate doings. The actions of The East are self-righteous and self-serving, and they don’t have the trickledown effect to convince others of their efficiency. Could The East not put their good intentions to better use?

Marling, who can also be seen in the current release The Company You Keep, gives one of her better performances as Sarah. Starting the film as the all-American girl and seeing a character arc that threatens to cripple the security of Big Business from the inside, Marling’s turn underscores how one can’t ignore the backwards progress of the West. Sarah’s transformation makes The East a call for action.

While The East works as a timely political film, Batmanglij et al deliver an entertaining thriller as well. Smartly paced and propelled by some unexpected turns, The East is engaging and intriguing. It helps, too, that the script and performances cast many of the characters in shades of ambiguous grey, so one never quite knows if the villain is Benji, Sharon, or the faces of The East’s targets, like the seemingly self-absorbed toaster played by Julia Ormond. There’s a faceless evil to The East that exists both in the doings of the corporate baddies and in the selfish retaliations of the radicals themselves.

Like the plight of The East and, allegorically, the ninety-nine percent, the mobs pleading for change in The East struggle to see their cause through to completion. Benji and his crew don’t achieve a clear goal, but, like the miscarried occupiers, a tangible result might not be overall point. The East opens the eyes of people like Sarah and mobilizes a more proactive social consciousness in the West. The message grows by the film’s end and The East leaves it to the audience to take up the fight.

The East is currently playing in Toronto at TIFF Bell Lightbox.
It opens in Ottawa at Empire 7 June 28.