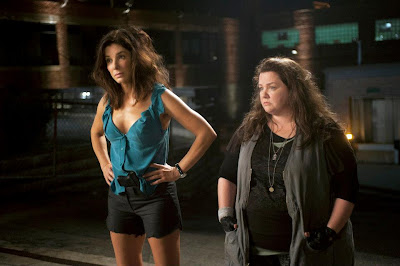 Summer movie season cranks up the heat! A fun, brazen comedy hits the multiplex this weekend amongst the sea of returns and redids. The Heat, Paul Feig’s follow-up to the 2011 smash hit Bridesmaids, boasts more rowdy fun from the ladies. Bridesmaids took the R-rated comedy, which was beginning to look tired after one serving of American pie too many, and brought it back to life by having a troupe of female comedians deliver some of the wildest dirty jokes in some time. It was also a really smart comedy, which made it as much of an anomaly. The Heat takes another staple of the guy-movie canon, the buddy cop movie, and introduces its first set of mis-matched female leads. The Heat might not be on par with the raucous raunchiness of Bridesmaids, but this odd-couple comedy starring Sandra Bullock and Melissa McCarthy is solid laugh-out loud entertainment.

Bullock plays the curmudgeonly stickler of the pair, starring as FBI Special Agent Sarah Ashburn. Ashburn has a nose better than a drug dog and a spotless track record, but she’s arrogant and hard to work with. A career driven cat lady, Sarah isn’t exactly a step forward for feminism. However, the jokes about her kidnapped cat, Pumpkin, are a giant leap for crazy cat people. (Stay for the credits!)

Ashburn’s superior (Demián Bichir, Foreverland) tells her to clean up her act and prove that she can work with anyone. He sends her to Boston to catch a drug-lord who has been leaving piles of chopped up dealers all over the streets. There’s a promotion in it for Sarah if she gets it right.

Ashburn’s eventual partner couldn’t be further from her own squeaky clean, anal-retentive primness. Detective Shannon Mullins (Melissa McCarthy) is a loud sweaty boor. The kind of cop who asks questions first and shoots later, Mullins is more vulgar than any man on the beat. What the two have in common, though, is their status as the only woman of rank in their respective departments. (Even Ashburn assumes Mullins is a man when she first arrives at the precinct.) Ashburn and Mullins struggle to get along, as most cops do in these odd-couple tales, in the first stages of their introduction. Ashburn lives by the rulebook while Mullins prefers to throw it at people.

They eventually fall into a kind of good-cop bad-cop routine, and riff off one another’s personality to play the perps. Some of The Heat’s funniest bits occur when the investigation leads to Mullins’ front door. Ashburn, spying a family portrait in Mullins apartment after the pair interviews a saucy Bulgarian dealer/hooker, remarks that Mullins must be the pride of her family. She’s not, Shannon explains, since she arrested her brother, Jason, (Michael Rapaport) in a previous drug case. Jason’s involvement in the current mystery brings Mullins back home to her white trash family where she introduces Ashburn to a colourful line-up worthy of Jerry Springer. The visit lets Bullock play some hilarious fish-out-of-water shtick off the likes of Joey McIntyre as Mullins’ brother and an especially funny Jessica Chaffin as the brother’s classless floozy of a girlfriend. It’s worth noting that both Jessica Chaffin and her boobs are credited.

Bullock and McCarthy are a lot of fun together playing up the yin and yang of the buddy cop movie à la Mel Gibson and Danny Glover in Lethal Weapon or Nick Nolte and Eddie Murphy in 48 Hrs. Bullock looks to be having the most fun she’s had in a while after the recent dramatic turn in her career with The Blind Side and Extremely Loud & Incredibly Close. Ashburn isn’t too far from Bullock’s other awkward-misfit-with-a-badge in Miss Congeniality, but she is a lot of fun in the role of the straight man.

Melissa McCarthy, likewise, is a hoot as Det. Mullins. Reteaming with Feig after Bridesmaids, the actress shows that her flair for brash obnoxious comedy can stretch beyond a supporting role. The Heat might be a more significant credit for McCarthy, for, after the misfire of Identity Thief, The Heat proves that she can indeed carry a movie. The Heat also improves upon McCarthy’s previous credit as it makes few, if any, jokes about her weight. The source of the comedy is McCarthy’s larger-than-life personality, which is her greatest asset since she can make even the looniest sketch work. McCarthy, after all, made audiences believe that she had explosive diarrhea in a sink.

The familiarity and freshness of The Heat makes it a rather timely offering for summer movie season. The annual glut of studio tent-pole releases often caters to male viewers. One need only look at Man of Steel, Iron Man 3, World War Z, This is the End, etc. to see that the major studio offerings are still testosterone heavy yarns for thirteen-year-old boys. Moreover, the months leading up the summer movie season have been especially important for noting gender gaps in the film industry, as reports surface of the comparative lack of presence of women behind the camera and behind the reviews critiquing such films. Mainstream moviemaking plays like a boys’ game.

Even Ashburn and Mullins aren’t too far from their male buddy-cop counterparts. Neither woman has a boyfriend, as each is married to her job. The only pokes at romance come in some funny bits in which the pantsuit wearing Ashburn is the object of affection for her twinkly-eyed fellow agent, played by Marlon Wayans, whom she dismissively treats like a secretary. Mullins, on the other hand, is a promiscuous stud, as the cops encounter a roster of her one-night-stands who bring up could’ves and should’ves like love struck little girls. Ashburn and Mullins wear the pants with bitchin’ pride.

The Heat plays by the rules, but it differs them enough so as not to feel tired and clichéd. The script by Katie Dippold is extremely funny by putting a new spin on sisterhood in what is usually a uniquely male premise. Like Bridesmaids, The Heat needs only to tweak convention a little to offer something new. The formula is the same, yet this buddy movie adds a few jokes about tampons, saggy lady parts, and wonky hormones. It’s standard genre revisionism, but it’s a step in the right direction for mainstream Hollywood entertainment. If you can’t take The Heat, stay out of the multiplex!

The Heat is currently playing in wide release.