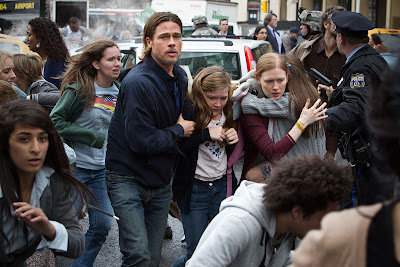 Joe the moviegoer is like a helpless child stranded amidst the zombie apocalypse of World War Z. The zombie flicks just don’t stop swarming the multiplex. Summer after summer, movie after movie, Joe joins the masses and gets sandwiched between a family of four, in which mom smuggles a bag of cellophane wrapped goodies into the theatre and passes them to the kids whilst dad makes inane comments and eats nachos. Cheap Tuesday is Doomsday at the multiplex in summer movie season, especially when the masses show up for redundant cash-grabs like World War Z.

World War Z is the penultimate zombie flick on auto-pilot. It’s only a matter of time before another of these brain-dead wannabe blockbusters leaves fans of mindless entertainment crying for a change. When the zombies awaken, the genre will finally die.

There’s nothing especially bad about zombie movies, as they’ve served up a good mix of bloody good times and useful allegory since George A. Romero popularized the ghouls back in 1968. Zombies, rooted more in real world mysticism than any other movie monster, are utilitarian and prone for re-invention. They moved at a glacial pace back in the day, but circa 2002’s 28 Days Later and 2004’s Dawn of the Dead, zombies have quickened their pace to move at the current speed of the glaciers. They’re melting fast.

World War Z, for all its pre-production bombast, doesn’t do anything new with the genre or use the tried and tested zombie bloodlust for any apparent allegory. The film, which stars Brad Pitt as a United Nations worker/mercenary named Gerry, takes “zombie apocalypse” to the extreme and amps up the body count as zombie terror goes viral and threatens to wipe out the planet. It’s essentially Contagion zombified. What, if anything, does World War Z try to say with an extravagant spectacle of globetrotting undead?

It seems as if World War Z wants to offer something profound as Pitt competently plays the reluctant hero and assumes a mission to find a cure for the outbreak in order to protect his wife (Mireille Enos) and kids from harm. The zombies’ hunger takes Gerry to South Korea, Israel, Wales, and Canada, but World War Z moves so clunkily—it’s like a video game moving from stage to stage—that the story never allows for any depth or resonance. (And many of the secondary characters are so disposable and inept that that World War Z offers the occasional bit of unintentional comedy.) The zombies have something to do with consumption and collective consciousness, but too much of the film consists of dialogue-free long shots of zombies wreaking havoc on the masses for it to add up to something meaningful.

World War Z is aptly entertaining, though, as the zombies flow through the streets on what looks to be the same algorithm that generates destructive waves in disaster flicks like Hereafter and The Impossible. Cranking up the speed and ferociousness of the zombies, director Marc Forster (Quantum of Solace) provides plenty of familiar thrills that helped rejuvenate the genre a decade ago, yet he smartly withholds much of the blood, cuts, and gore, thus leaving the excess up to the effects. World War Z has a few decent frights, too, so die-hard zombie fans will probably like the mix of spectacle and scares.

There’s only one legitimately impressive sequence, however, to muster any kind of enthusiasm from viewers who have grown tired of watching zombies and filmmakers play the same game. It’s the final act, which puts Gerry in the hero role in a medical centre that holds the potential vaccine amidst a sea of zombies. The tense hospital sequence strips zombie horror to its roots and does away with the large-scale spectacle generated by the crappy CGI. The tension is real in these twenty minutes as the audience sits on edge in anticipation of what lurks around the corners in the quiet halls of the hospital. For all that’s been added to the world of zombie movies, they seem to work best in their old-school minimalist horror.

The finale’s good, but World War Z delivers awfully late in the game to satisfy. One can’t help but feel like a zombie during the mind-numbing formula of the first acts. Brad Pitt might be the saviour of the zombie apocalypse, both in and of the movies, if he helps people awaken and exterminate the zombies. Joe the moviegoer (and his brains) will thank him.