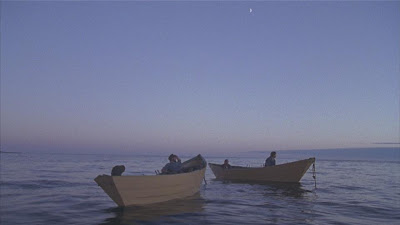 Did you ever see the Alfred Hitchcock movie Lifeboat? The classic is one of The Great Director’s better flicks, as Hitchcock offered a suspenseful tale of shipwrecked survivors clinging to life in the ocean, trapped with one of the very Nazis that sunk their ship. The 1944 thriller holds up to this day, but one suspects that Mr. Hitchcock would have tipped his hat to writer/director Shandi Mitchell in appreciation of The Disappeared.

This high-seas drama shares Hitch’s sensibility that the greatest of suspense films plays out on a small intimate scale. Like the survivors of Lifeboat, the six men of The Disappeared awaken the day after their shipwreck. Two boats remain with three men apiece. The cause of the wreckage isn’t quite clear, nor do the men reveal how many, if any, of their fellow sailors went down with the ship. It’s immediately evident, though, that the sailors are tired, exhausted, and much further from shore than their meager supplies will carry them.

The Captain, Gerald (Brian Downey), is a weathered old man who believes luck is on their side. Using only a compass, Captain Gerald directs his skeptical crewmen to row for their lives. The first mate, Mannie (Billy Campbell), survived the sinking as well, but he’s marked by a nasty gash that holds the remaining splinter of the Captain’s ship. It’s a fateful memento that could do him in long before the exposure of the sea does, ditto the dwindling supplies managed by Gib (Ryan Doucette). The other boat holds a father-son pair named Merv and Dickie, played by Gary Levert and Neil Matheson, respectively. Pete (Shawn Doyle), finally, might be the most stereotypical of the seamen, as he is a cocky chap who boasts his notoriety with women and the sea alike as the sailors row towards their doom. Even Pete’s bawdy defense mechanism can’t fool the group that they’re no match for the sea. The Disappeared, like Lifeboat, is an unnerving tale of suspense, especially since Mitchell evokes their fate through by maintaining a careful sense of time and a tone of foreboding, which is marked especially by subtle symbolism linked to the men’s way with the sea. (A snapped oar in their early efforts hints that luck isn’t on the sailors’ side.)

Framed by the expansive waves of the Atlantic Ocean, which seems endless in its reach to the horizon, the men of The Disappeared are engulfed by the way of life that will undoubtedly claim their lives. The camera, helmed by DP Christopher Cooper, bobs with the waves of the sea as the six members of the strong ensemble tread the testy waters that wait to consume them. Shot entirely on location in the waters of Lunenberg, Nova Scotia, The Disappeared is a potent, riveting tale of men doomed by the landscape that defined them.

The sailors’ predicament inevitably results in a kind of claustrophobia, or a cabin fever of the seas. As the men realize that their lifeboats carry nothing but death (a sense that becomes literal partway through the journey), their animosity and hopelessness becomes a greater threat than the seas. Panic, hunger, and despair could do them in just as soon as the natural forces of their surroundings. The Disappeared, however, threads a code of honour between the men, for there is a sense of duty, propriety, and principle fighting to survive in the boats. Anchored astern by Mitchell, the filmmakers taps into the psyche of these men with a respectful, yet detached eye. One crucial decision towards the film’s climax links the sailors’ sense of marine duty to the loss and mourning that waits on the shores. These sailors are a dying breed, but they’re also husbands, sons, fathers, and brothers.

The Disappeared puts the six survivors in a fascinating dilemma of psychological peril. They can choose to drift and temp fate as they wait for rescue, or they can use their skills and knowledge of the sea to row to shore in hopes that time and direction are on their side. The men, guided by Captain Gerald, decide that it’s ultimately better to die trying than to sit and wait for the sea to claim them. Even rowing, however, likely brings them towards death. This unique dilemma anchors the potency of Mitchell’s character study, as the fate of the sailors looms above the rowboats like the expanse of the horizon.

The Disappeared, told entirely from the confines of two flat-bottomed rowboats, enjoys with a kind of poetic realism, whereas the Hitchcock classic has a sheen, style, and novel undercurrent of xenophobia unique to wartime Hollywood. No bloodthirsty Nazis cause peril in the high seas of The Disappeared and Tallulah Bankhead doesn’t camp up the act. The Disappeared, gritty and realistic, uses the spirit of the six shipwrecked seamen as both a buoy and a catalyst for high stakes drama. Avast ye land lubbers, and see The Disappeared!

The Disappeared screens at the Female Eye Film Festival in Toronto on Friday, June 21 at 5:30 pm.
Please note that actor Shawn Doyle will be in attendance for a Q&A.