Contest: Win Tickets to 'The To Do List' (Closed) 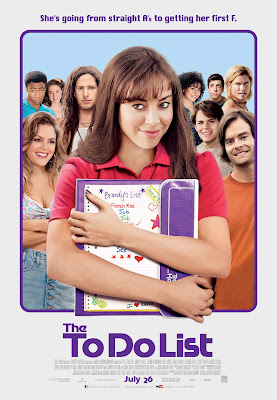 There are so many good indies to see this summer that the list keeps growing and growing. Luckily, ten readers can scratch the upcoming comedy The To Do List off the ever-expanding roster of films to see. Loosely inspired by the real-life adventures of first-time writer/director Maggie Carey, The To Do List is a heartfelt comedy about close friends and a special summer project. Set in 1993, valedictorian Brandy Klark (Aubrey Plaza, Safety Not Guaranteed) wants to shed her uptight image before college, so she assembles a to do list of all the “activities” she missed out on in high school. Quickly realizing that she's way out of her depth, Brandy solicits her best friends (Alia Shawkat, Sarah Steele, Donald Glover, Christopher Mintz-Plasse and Johnny Simmons), older sister (Rachel Bilson) and burnt-out boss (Bill Hader) for their help and advice. If the group is going to complete the list by September they'll need plenty of imagination and very open minds.

Thanks to our friends at eOne Films, we have ten (10) double passes to giveaway to the Ottawa sneak peek of The To Do List. All you have to do to win is answer the following question:


Brandy has lots of work to do before heading to college. Which of the following is not a task on her “to-do” list? Watch the trailer below (NSFW) and cross off the answers as it goes along!


b) The English Crumpet


(Consult Wikipedia at your own peril.)


Email your answer to contests@cinemablographer.com with the subject To-do List.


The To Do List opens theatres July 26 from eOne Films.