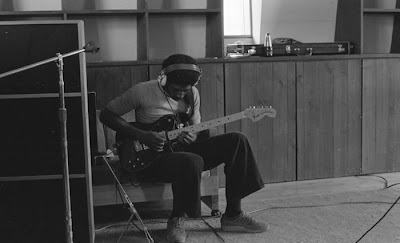 What’s in a name? The title of a movie, album, or book is often a main selling point. If the name isn’t catchy, though, or if it doesn’t fit on a marquee, one can always rebrand and sell a product to audiences anew. However, what if the name and the work are one and the same? The ongoing legal battle with The Butler, for instance, is a good example of how a name change is easier said than done.

Such is the case for a rock band from the 1970s called Death. Death, formed by brothers Bobby, Dannis, and David Hackney, was ahead of its time. Death produced a raw sounding kind of garage rock that caught on in the latter half of the 1970s. Punk wasn’t made popular by Death, but it could have been.

Bobby and Dannis walk the audience through the unbelievable but true story of Death’s long-delayed success. (There are also some interviews with the likes of Alice Cooper, Henry Rollins, and Elijah Wood to bookend the film.) The brothers would jam for hours a day—they were allotted a daily three-hour window by their supportive mother—and would explore new kinds of music that fit with their style and energy. The effort ultimately led to hard rock, now known as punk, which already placed the brothers as a tough sell. Being three African-American boys from Detroit, they were often passed over as Motown musicians making a run at “White Man’s Music.” The brothers nevertheless shopped their music around to the right people, who were reportedly chosen by the fateful combination of a dart and a phonebook, and folks in the industry saw something of value in the music.

Success, Bobby and Dannis reveal, was always an arm’s length away. Record labels, executives, and other potential backers intrigued by the music would inevitably ask the fateful question, “What’s the band’s name?” A band called Death just doesn’t inspire confidence. Death was offered several deals, including one from Clive Davis, so long as they adopted a new name. Bobby and Dannis considered it, but David refused to sell out the band’s identity.

There was life after death, however, as the band was discovered in the past decade. David had since passed away. David’s posthumous success realized an eerie prediction of his that their music would enjoy success, but not in his lifetime. Death, now something of a cult legend, sees their old records sell for upwards of $800 in an online bid.

One can’t help but cite A Band Called Death as a worthy companion piece to the rockumentary Searching for Sugarman, which won the Oscar for Best Documentary Feature at this year’s Academy Awards. The tale of Death is much like the incredible story of Sixto Rodriguez’s long-delayed success. (Similarly, both documentaries might be examples in which the story of film is greater than the film itself.) A Band Called Death doesn’t suffer if one has seen Sugarman, though, since the tale of trying to make it in the music industry is an ageless tale. Both artists, however, seemed to find a kind of success they deserved: they were discovered and praised for the quality of their work, rather than sold on the commercial viability of the music. A Band Called Death touches upon an odd conundrum in the business of art, as the deferred notice for Death suggests that the brothers really could have made it big if they had only changed their name.

No amount of $800 records will ever recoup the gains that Death would have enjoyed had it made it big in the early days, which is a thought that the film glosses over in delivering the touching story of Death finding fame after David passed. Similarly, the retrospective analysis treats David with a kind of saintliness. His unwavering belief in the band admittedly delayed its success, but the story of Death’s comeback isn’t nearly as powerful if one removes David and his prophecy from the equation. There is a tangible undercurrent of poetry to Death’s story that feels vital and fresh on the heels of Rodriguez’s tale. The theme of death, which David had clung to so insistently during the band’s early days and maintained to be an irreparable aspect of the band’s identity, becomes like an expressive hallmark to Death’s work and it gives the music a layer of depth no artist can write. Death’s music was so ahead of its time, perhaps, that it outlived even its conceptual father.

A Band Called Death ultimately ends with a poignant note on the legacy one leaves through philosophy and music. The band’s belief in their artistic identity eventually saw Death grace the label of an album and perform onstage for cheering fans. The music lives on, as the film shows in a touching final act in which Bobby Hackney’s sons cover the music of their father and uncles. The story of A Band Called Death only adds to strength of their music. It brings out the rawness and the urgency of the composition and the lyrics. A Band Called Death tells a great story of second chances and of the merits in holding on to artist beliefs and refusing to sell out for success. Good work will always find an audience. It might just not succeed during the lifetime in which it was produced.

A Band Called Death screens in Ottawa at The Mayfair July 17-18.