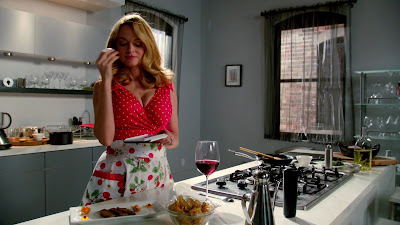 Canadian cinema of the late 1930s saw a dark period known as the age of the “Quota Quickie.” These wham bam thank you, ma’am type jobs were essentially low budget productions financed by Hollywood, but shot in Canada so that the Brits could make a goal of filling their cinemas with at least a quarter of their programming composed of British and/or Commonwealth products. These negligible pieces, rightly fallen into obscurity, were rarely set in Canada and offered a cultural value that was negligible at best.


The ghost of the Quota Quickie came back in the tax shelter days of the 1970s, when efforts to boost Canadian production saw increased tax write offs and even voluntary programming quotas from a whopping two theatre chains. As in the days of the QQ, the tax shelter years saw a certain Hollywoodization of Canadian cinema. Commercial productions were rightly emphasized so as to generate an industry, but one cunning producer too many saw the benefit of a 100% tax write-off and made one disposable clunker after another. These years nevertheless produced some of the greatest Canadian films, with films like the Richard Dreyfuss vehicle The Apprenticeship of Duddy Kravitz earning Canada some legitimate notice. Star-studded, commercially friendly films like Duddy paved the way for the unique films of David Cronenberg and even Atlantic City, the best film of that era, which proved that “distinctly Canadian films” and star-studded international co-productions could live side by side and work together to create a robust national cinema.

Jump forward to the year 2013. People seem more conscious of Canadian cinema more than ever thanks to attention-grabbers like Oscar race and the films of Sarah Polley. There’s even a national promotion strategy aimed at urging Canadians to see the strengths of Canadian media.

However, as government bodies are telling Canucks to keep an #EyeonCanada, the industry seems to be taking a step back and churning out more crap than ever before. This spring saw the much-buzzed wide release of The Colony, starring Laurence Fishburne and Bill Paxton, which revealed itself a black hole that sucked up sixteen million dollars that will surely never be seen again. If The Colony was a relic of the tax shelter days, however, it is surely eclipsed by its future neighbour in the bargain bin, Compulsion, which is a riotously bad and offensively cheap thriller-cum-comedy. The only thing nice one can say about Compulsion is that it at least provided Canucks with a few short-term jobs. Even the cinematography by Academy Award winner Vilmos Zsigmond is bad.

Heather Graham stars as a psychotic foodie named Amy who dreams of hosting her own cooking show. Amy also has an intense infatuation with her reclusive neighbour, a has-been actress played by Carrie-Anne Moss (how meta) with the divine name of Saffron. Saffron now makes a living as a sex columnist despite the fact that she has no discernible sex life whatsoever. Or she at least lacks one until her neighbour tries to spice things up, as Amy slaves all day in the kitchen to please the woman named for the most divine of spices.

Compulsion is told in a framed narrative that sees Amy recount her gradual friendship with Saffron to a detective (Joe Mantegna) who is investigating the neighbour’s disappearance. Detective Reynolds displays the poorest of investigatory skills—Mantegna is clearly mailing himself in from the set of “Criminal Minds”—and fails to notice the bizarre behaviour of the woman whom he is interviewing. She’s cooking for four when the table’s set for two; her dinner guests never seem to arrive, etc. Reynolds, however, does note that she’s more concerned for her soufflé than for her missing friend. Compulsion builds to an inadvertently hilarious climax as Amy’s story works its way to the main course. It puts the “gas” in gastronomy.

The food looks delectable, but the film that accompanies the mouth-watering goodies is like a sleazy Brian de Palma-ish remake of Simply Irresistible. Food and erotica are not as sexy as mix as one expects them to be, or at least they aren’t when they’re prepared like this. Amy will begin a meal by placing a plate of organic partridge before her husband, Fred (Kevin Dillon), as she tries to win over his philistine taste buds with her culinary skills. Fred then sweeps aside his plate and decides that he’d rather eat Amy instead. Right there on the dining room table, which just so happens to receive a clear view from Saffron’s window. Dinner and a show for Saffron, Amy provides.

The clunky reveal of Saffron’s disappearance is marked by frequent interludes that highlight Amy’s increasing mania. Garishly lit fantasy sequences let Amy show off her cooking skills in a range of busty haute couture as she flirts with imaginary audience members and teaches them how to win a heart by pleasing the stomach. The fantasy interludes almost elevate Compulsion to the level of so-bad-it’s-good camp thanks to Graham’s hilariously loony scene-chewing as she shucks oysters and acts extra saucy. Heather Graham is clearly having a ball in the role of Arsinée Khanjian from Felicia’s Journey. Graham is joy to watch, if only for the unmistakable hint of self-awareness in her performance that her career has been reduced to performing in Z-grade kinky Canadian 'thrillers' shot in desolate Northern Ontario.

Less of a guilty pleasure are the interludes for Saffron. Compulsion features several bizarre flashbacks that reveal Saffron's insecurity from her days as a young actress. Issues of body image, anxieties for perfection, and the exploitation of the casting couch gave Saffron an ongoing eating disorder that prompts hysteria from her neighbour whose profiteroles and rack of lamb go untouched. The flashbacks might explain why Amy force feeds a bag of grimy garbage down Saffron's throat, but they don't do much to illuminate why Saffron might find the dumpster diving a turn on. Logic certainly isn't Compulsion's strong point.

Compulsion, a remake of the 1995 South Korean Film 301, 302, is film facepalm. This misfire provides a silly erotic thriller set in New York City, which is played by the snowy city of Sault Ste. Marie. The production team doesn’t even bother to try to mask the city, aside from the occasional insert of second-unit and/or stock footage, it’s such a quickie. Compulsion is the kind of film that inspires one to eat and run, as the film is compromised almost entirely by its cheap, sloppy production. Take one scene, for example, in which Amy receives a call from her friend, Sylvia, (Kate Trotter), who is on the phone in the mall. One can clearly see that all the other stores have been closed and shuttered for the night, even though there’s a pair of extras wandering in circles just to give the mall an air of working hours busyness. Other staging is similarly shoddy, as Saffron's apartment resembles a college dorm common room refashioned anew. Likewise, one scene sees the camera jolt with a jerk as it sticks catches before going in for a pan. The film is embarrassingly cheap and can’t justify the star-power before and behind the camera.

Compulsion is yet another terrible example of Canadian’s failure to produce commercial entertainment, but it takes the cake in the canon of Shitty Heather Graham Movies. Amy tells her audience that cooking is supposed to make one feel loved, but Compulsion clearly didn’t follow a recipe for success. Even the laugh-out-loud funny lesbian love scene between Amy and Saffron is an epic catastrophe that is less appealing than a frozen meal like The Colony. Like the Quickie that so obviously inspired it, Compulsion is a half-cooked and tasteless entrée. The only thing this foodie thriller forgot is a barf bag.

Compulsion is currently available to rent on Google Play.