'We Need to Lift Oscar Up.'

(USA, 90 min.)
Written and directed by Ryan Coogler
Starring: Michael B. Jordan, Melonie Diaz, Octavia Spencer.
“Wake up! Wake up! Up you wake!” cries Mister Señor Love Daddy (Samuel L. Jackson) in the opening cue for Spike Lee’s 1989 film Do the Right Thing. I last watched Do the Right Thing while working as a teaching assistant for an introductory film class a few years ago. The discussion for one of my two groups hardly followed expectations. Even in 2010, students were actually debating the finale that sees a secondary character beaten to death by the police following a riot at a neighbourhood pizzeria. Several voices seemed more focused on the property damage that incited the event. “Mookie shouldn’t have broken the window,” one student said. “But Radio Raheem died,” I noted, wishing I could remove the mask of diplomacy and instead just my students to “wake up.”


The power of Do the Right Thing, a landmark American film and one of the most important films of the 1980s (if not all time), feels present throughout every frame of Ryan Coogler’s noteworthy feature debut Fruitvale Station. Fruitvale Station, winner of both the Grand Jury Prize and the Audience Award for U.S. dramatic film at the 2013 Sundance Film Festival and the Avenir Prize in the Un Certain Regarde programme at the Cannes Film Festival, dramatizes the final day in the life of Oscar Grant (Michael B. Jordan), who was shot by a police officer on New Year’s Day 2009. It feels as if little has changed in America during the twenty-four years between Fruitvale Station and its precursor, Do the Right Thing. Fruitvale feels even more sickening, though, because the casualty is real.

Coogler presents the audience with the famous footage of Oscar’s death that went viral and became an international sensation. The disorienting, grainy image of Oscar’s death at Fruitvale Station, which was captured on cell phones by various passengers on the BART trains, reminds viewers of the shocking images that made headlines and put Oscar’s face in the news. Coogler then flashes back to the morning of New Year’s Eve 2008 and presents Oscar’s last day alive. It’s a fair, balanced, and poignant look at the life of an ordinary individual who met an extraordinary fate.

Fruitvale Station could have easily set about beatifying its subject, but the even-handedness of Coogler’s approach makes the inevitable finale extremely affective. Oscar comes off with the air of a flawed saint: he wasn’t America’s straightest, most law-abiding citizen, yet he seemed like a genuinely good person at heart. The common, quotidian narrative walks Oscar through various steps that any American could do on one fine day: he helps a stranger (Ahna O’Reilly) at the grocery store and he prepares birthday celebrations for his mother (Octavia Spencer). He even calls his grandma.

Oscar’s last day plays like the first day of a fresh start. Fruitvale Station builds to its finale by seeing Oscar do various acts of atonement and goodwill, whether it’s giving up dealing drugs or vowing to be a better father to his daughter, Tatiana (Ariana Neal). One odd moment of foreshadowing, which almost serves as the turning point of the film, sees Oscar befriend a random dog, only to see the mutt run down in the road. When Oscar arrives at the party in a blood-stained white tee, it’s an eerie reminder of what’s to come.

When the scene of the shooting arrives, it’s over almost as quickly as it began. Confronted by some hothead cops, played by Chad Michael Murray and Canadian actor Kevin Durand (Edwin Boyd), Oscar and his friends are deemed suspects in a fight, when Oscar was actually the target. An obvious case of racial profiling sees Oscar pulled out from the crowd of boozy revellers. The cops’ loaded language—words like “boy” and such—leaves little room for speculation that the situation would have ended differently for a white kid. Then, with a “pop” that shocks even though it appeared in the opening scene, one cop kills Oscar in cold blood.

The finale of Fruitvale Station comes and goes quickly. There’s a palpable sense of loss that occurs in the brief denouement that follows the homicide and the heart-rending scenes of Oscar’s family at the hospital. The timing and structure of Fruitvale Station creates the sense of a life cut short, or of a story written without an ending or closure. It’s an emotionally unbearable finale, but also one that moves easily into debate. Regardless of who Oscar was, he didn’t deserve that fate. Nobody does.

Fruitvale Station is firmly anchored by Jordan’s commanding and charismatic performance as Oscar. There’s a youthfulness, but also a hardened edge of experience, that allows his portrait of the figure to feel relatable and real. Oscar’s humanity rings through in Fruitvale Station: he’s not just another statistic in America’s homicide rate, nor is he portrayed as an unblemished saint or an unruly thug who got what he deserved. Thanks to Jordan’s performance, Oscar is a young man of the world who was ready to do more and learn from his mistakes to better his family and community. 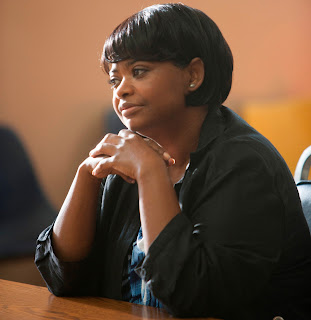 The heart of Fruitvale Station, though, is Octavia Spencer’s performance as Oscar’s mother, Wanda, who is called to do the heavy lifting in the film’s most emotionally stirring moments. Spencer, perhaps even outdoing her Oscar-winning work in The Help, delivers a character of depth, humour, and unwavering perseverance. Spencer’s sensitively cathartic turn honours her subject, but also extends the unbearable sense of loss from Oscar’s mother to the audience.

“We need to lift Oscar up,” Wanda says as she leads Oscar’s friends and family in an eleventh-hour prayer session at the hospital. It’s a phrase that echoes long after Fruitvale Station ends and leaves viewers shaken by Oscar’s death. It’s a prayer for all victims of violence—past and future—and for all those who can to rise up and ask for peace.

The message of Fruitvale Station takes a different tone from the sexy staccato of the Love Daddy’s line in Do the Right Thing. Coogler tells a provocative story of race in America without any rhyme or embellishment: it’s a straightforward, humanist, down-to-earth story of a life cut short by a senseless act of violence. Unlike the finale of Do the Right Thing, though, there’s nothing to allow viewers to take sides. Fruitvale Station isn’t asking for a debate; it isn’t looking for an argument; it wants a solution. It wants America to wake up.

Fruitvale Station opens in Toronto at the Varsity on July 26th.
It opens in Ottawa August 15 at Empire 7.