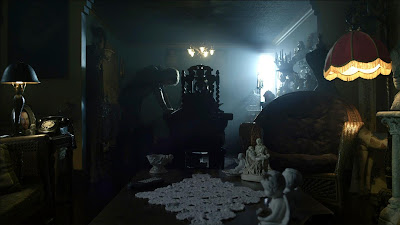 Being home alone can feel creepy. Sleep seems troublesome on a dark and stormy night, especially when the lights are out and strange noises are coming from every angle. Now imagine trying to feel comfortable staying in a house after leaving it years before. It’s a childhood home, which was recently vacated by its sole occupant, the mother, who departed in a strange and unusual death.

Rosalind Leigh, voiced by Vanessa Redgrave, left behind a creepy old house full of ornaments and religious figures. Her son, Leon (Aaron Poole), returns home as she explains in voiceover her cryptic final thoughts and unfinished business. Leon is left to sort out the odds and ends of Rosalind’s life, which seems to have been confined to a ghoulish shrine to some sort of religious cult. Situated somewhere between an occultist and a holy roller Rosalind Leigh seems to be.

Rosalind haunts Leon the minute he walks in her door. Rosalind’s house is truly an eerie place. It’s stuffed with all sorts of antiques, which she bought from Leon’s dealership without his knowledge, and dressed in an immaculately detailed feat of set decoration. Trinkets, statues, and creepy embroideries create a ghostly atmosphere in Rosalind’s home. Leon has clearly entered a haunted house, but the force behind the unnerving presence is neither good nor evil.

Writer/director Rodrigo Gudiño keeps the rift that created the distance between Leon and his mother a secret for the first act of the film. It’s only after Leon trudges through the dirty basement and then comes upstairs to find a bizarre videotape in the TV, which documents an odd religious ritual involving his mother and her fellow worshippers, does the mystery become palpable. Leon, paranoid and slightly off-kilter over what he has just watched, is creeped out exponentially when he discovers a new angel statue in the living room. It was in the basement last he checked.

The angel turns out to be a gift from his mother, which she would use to test Leon’s fate. The Last Will and Testament of Rosalind Leigh thus uses the tension between belief and non-belief as the current for fear as Leon questions himself throughout the bumpy night. The scares of Rosalind Leigh come through faith and folklore. It’s all what one believes—or doesn’t believe—that is cause for terror.

The film is invested in both an ambiguous religious overtone—one never gets a full sense of what Rosalind practices and/or preaches—and a thread of spooky superstition. Take, for example, one of Rosalind’s homemade wall hangings that Leon observes in the kitchen. It advises houseguests that if one drops a knife, a man will visit. If a spoon, a woman; if a fork, what comes will be neither man nor woman. (Always take caution not to unload the dishwasher too quickly.) Leon drops a fork. He later receives a rap on the door from a mysterious caller. The visitor, whom Gudiño keeps outside the frame, has a voice of an implacable tone. It could be male or female; one doesn’t know. One must rely solely on the senses and weigh one’s belief in Rosalind’s folklore to see if this stranger poses a legitimate scare.

The Last Will and Testament of Rosalind Leigh lets a viewer play much of the tension in his or her own mind. The film is essentially a one-man show for Poole, who carries the film well, with cast members such as Redgrave and Charlotte Sullivan appearing only as disembodied voices. All the other figures, played by Julian Richings aka the resident creepy guy of Canadian cinema, are mediated by video images and window frames. The impressive sound design and carefully framed action create some discomforting moments in the absence of actors as viewers imagine the sources of these sounds. Poole rarely shares the screen in Rosalind Leigh and the film enjoys an atmosphere of isolation and suffocation.

Towards the latter half of the film, however, The Last Will and Testament of Rosalind Leigh invites a ghoulish CGI figure to visit upon Leon. A haunted house picture becomes a monster movie and Rosalind Leigh loses faith in well-executed minimalism to convey horror. The demon that visits Leon looks like a rough draft of Gollum from the VFX lab. Much of what the ghoul does is eerie, as he visits Leon like a kiss from Satan, but he looks more aptly fit for Looney Tunes than for a horror film. The ghoul embodies a play between believing and non-believing, though, so die-hard horror fans might be able to keep the faith right until the end of Rosalind Leigh.

The appearance of the ghoul, on the other hand, muddles the message of the film. Is The Last Will and Testament of Rosalind Leigh a compelling provocation on faith, or is it a mere haunting fuelled by a deranged and departed old woman? The film is nevertheless an impressive exercise in low-budget filmmaking, as Gudiño provides a consistently compelling creep-show using only the essentials. Whatever one believes to be good horror, though, The Last Will and Testament of Rosalind Leigh is sure to provide a thrill.

The Last Will and Testament of Rosalind Leigh screened at The Mayfair July 3-4.