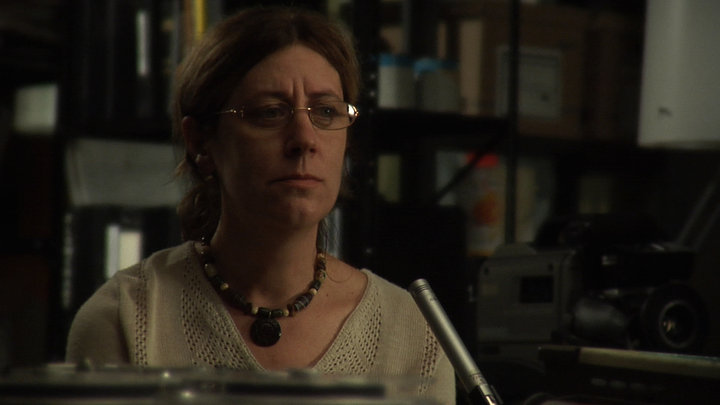 If action, explosions, naughty bits, and other facets of mindless summer entertainment are a movie-must, then Daniel Cockburn’s You Are Here probably isn’t the film for you. If, however, the endless stream of sequels and re-dos leave you thirsty for substance, then You Are Here provides more than enough debatable mumbo-jumbo to stop the drought. You Are Here, the first feature film by video artist Daniel Cockburn, is a true thinking-person’s film.

You Are Here appropriately appeals to thinkers with an intellectual address. The film begins with a low-res video image of a lecturer (R.D. Reid), whose mop of gray hair and sporting eye patch might first lead viewers to think they’re watching the ghost of Nicholas Ray. The lecturer, who provides a speech that would probably have piqued the mind of the late director, talks before a screen of waves in the ocean. He’s testing the audience’s perceptual skills. Both the audience outside the frame of the video image and the audience inside the theatre are tasked with his test of cognition. It’s meta—very meta—but the opening scene is just a preamble for what is to follow.

The whole of You Are Here might feel like a preamble itself, for one never quite knows how to get a deal for the characters, story, and setting. The film is a constant game of sense making as it introduces a variety of seemingly unrelated storylines and lets them unspool in all sorts of directions. A common man named Alan encounters a conundrum of being, identity, existence, and everything else in between as Cockburn presents the character as an everyman through a frenetic editing job that allows various actors to inhabit the role for mere frames of screentime.

Similarly confounding, yet entertaining, is a quirky look into the daily work of a quartet of office employees. They’re not so much like the drones of Dunder Mifflin, as the workers have the eccentric task of tracking their agents as they move across the busy streets of Toronto. Ill prepared for random acts of chance in their ordered job, the tracking agents tense as they put two of their field agents (Nadia Litz and Alec Stockwell) on a collision course of determinism.

Some of the Toronto stories don’t work as well as the others do. For example, the scenario with the tracking agents and field agents appears too fleetingly in the early section of You Are Here and returns only at the very end. The brief scenes are intriguing and darkly humorous, but they’re too abbreviated to be fully satisfying. You Are Here, at a scant hour and twenty minutes, might have opened more minds my expanding some of the stories and granting the film even more of its eclectic elasticity.

Similarly, an odd interlude with an experimenter (Anand Rajaram) who has trapped himself in a solitary room modeled on the human mind seems like metaphysics for its own sake. It’s an odd, random scene, although the succeeding lecture feels even more out of place. How to decode You Are Here, or why to bother deciphering the seemingly entropic mass of scrambled eggs, might seeming pointless by the end of the half hour mark.

It’s only then that Cockburn throws the viewer the first clue. The hook of You Are Here is a lonely figure who wanders the city collecting discarded items of refuse. She’s an archivist (played by the late Tracy Wright), whose discoveries unearth far more than their mundane appearances suggest. The archivist contains a roster of found footage that appears throughout the meta-filmic journey. For example, she watches the lecturer drone on about the red dot before You Are Here skips setting and, presumably, tense, as the lecturer appears in a contemporary (re: high) resolution, capturing his video footage in a dramatic sequence with kids. While watching the archivist watch the lecture, it becomes clear that she has been with the audience all along. It might not be clear when the archivist appears almost halfway into the film, but this odd figure presents the audience’s window into Cockburn’s strange world.

The archivist is the surrogate, the one making sense of all the pieces of the puzzle that have been stored and sorted. Looking at the things, turning them over, and returning to them at different times afford the archivist more perspective on the seemingly random things in her trove. It helps that the archivist’s quirkiness and inquisitiveness is made entirely accessible by Wright. You Are Here fittingly marks the actress’s final release, although Wright’s swan song was her final—and arguably finest—performance in Bruce McDonald’s Trigger. The archivist’s odd and academic soul-searching opens a door to You Are Here’s cerebral meditating that had previously been left ajar. The archivist’s thoughtful relationship with man-made objects bears a lively resemblance to Cockburn’s playful earlier work on one’s way of making sense of one’s self in relation to the technology structures—or binds—one’s life. The archivist’s perspectives appear mostly in relation to, or are framed by, media; but she only finds clarity when she bumps into a fellow human and gains a second opinion.

A wealth of ideas collide in this metaphysical and stylistically innovative odyssey through mankind’s perception of place, space, and time. You Are Here plays like the cracked out lovechild of Charlie Kaufman and Miranda July, but that’s hardly a bad thing since firstborns rarely have such an intriguing fusion of form and content. It’s arty, dense, and full of ideas that don’t seem tangible in the present tense. You Are Here makes little sense until the very instance that it’s over, or perhaps only in the tense that follows in the post-screening discussion.

You Are Here screens in Ottawa at SAW Video on Friday, July 19.
Daniel Cockburn will be on hand to discuss the film and present a lecture before the film.
(So be ready to debate the night away!)