Everybody has a Plan (Todos tenemos un plan) 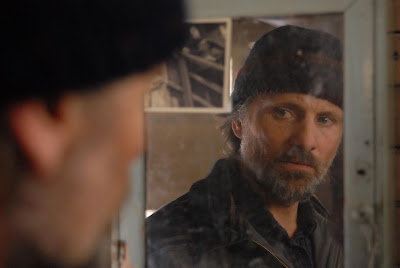 Viggo Mortensen gives a powerful performance in the otherwise muted thriller Everybody has a Plan (Todos tenemos un plan). Mortensen, who lived in Argentina for a decade during his childhood, will surprise many viewers with his grasp of the Spanish language while navigating a tricky dual role. The actor stars as twin brothers Augustín and Pedro, a pediatrician and beekeeper/kidnapper, respectively, who couldn’t seem to be any more different aside from their genetics. A strange business offer from Pedro, though, takes Augustín’s life down a startlingly dark path.

The brothers, although estranged for years, share a connection and a sense of loyalty few people ever grasp. It’s an odd bond that struggles to hold together this slow and tonally uneven thriller/revenge pic, but Mortensen offers consistently compelling moments as Augustín finds himself engulfed in the seedy backwoods underworld in which Pedro has built an empire. The supporting cast demonstrates a much different school of art than Mortensen, though, as the lead delivers a performance of subtle nuance that stands out from a roster of telenovela theatrics. Complicating matters is a pair of half-cooked love stories featuring Sofía Gala as Pedro’s protégé/mistress, Rosa, and Soledad Villamil (from The Secret in Their Eyes) as Augustín’s devastated wife, Claudia. Both actresses bring considerable dramatic chops to underwritten roles, especially Villamil, whose character exits the film in a curiously abandoned storyline that could have brought Everybody has a Plan to a whole other level.

There’s a myriad of missed opportunities in Everybody has a Plan, the most of which is the stillborn thread with Augustín and Claudia. The scene in which Claudia visits her husband in jail, believing him to be Pedro, might offer the most riveting few moments of the film, but everyone has a plan takes this plot nowhere and leaves loose threads. The film instead focuses on Augustín dealing with the aftermath of his brother’s violent legacy by dramatizing a plan of action similar to one that Pedro explains during the opening scenes in his apiary. When a beehive fails to produce, Pedro tells Rosa, the only thing a beekeeper can do is kill the queen bee and supplant a new leader to rejuvenate the hive. Killing people doesn’t work as cleaning as sweeping out a beehive, though, and Augustín finds that life isn’t all golden honey as he deals with the ruffians looking to get even with the man he now pretends to be.

Mortensen is an exciting anti-hero and the dual role provides intriguing work akin to that of the actor’s performances as a crooks and men with double lives in his collaborations with David Cronenberg, A History of Violence and Eastern Promises. Everybody has a Plan, while occasionally tense and atmospheric, is ultimately a slow meandering thriller that never really thrills. It amounts to little more than a sub-par Breaking Bad copy with subtitles as Augustín realizes his own dark side that has lain dormant during his brother’s reign. As Walter White/Heisenberg might say to Augustín/Pedro, it’s the difference between Classic Coke and store brand. There’s a good plan here, but a good plan needs equally good chemistry and execution.

Everybody has a Plan is now available on DVD and VOD.