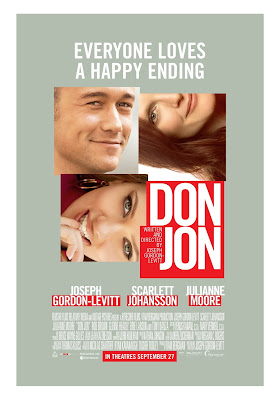 Were you following all the hype at TIFF last week? If you did, you probably saw tweets galore about Don Jon, one of the buzziest films to hit the fest this year. Don Jon marks the feature directorial debut of actor Joseph Gordon-Levitt (Looper) and it’s been earning great reviews since premiering at Sundance earlier this year. Don Jon stars JGL alongside Scarlett Johansson (Under the Skin) and Julianne Moore (What Maisie Knew)


Synopsis: Jon Martello (Joseph Gordon-Levitt) is a strong, handsome, good old fashioned guy. His buddies call him Don Jon due to his ability to “pull” a different woman every weekend, but even the finest fling doesn’t compare to the bliss he finds alone in front of the computer watching pornography. Barbara Sugarman (Scarlett Johansson) is a bright, beautiful, good old fashioned girl. Raised on romantic Hollywood movies, she’s determined to find her Prince Charming and ride off into the sunset. Wrestling with good old fashioned expectations of the opposite sex, Jon and Barbara struggle against a media culture full of false fantasies to try and find true intimacy in this unexpected comedy.

Thanks to our friends at Touchwood and Remstar, Cinemablographer has fifteen (15) double passes to give away to the Ottawa sneak peek of Don Jon. All you have to do to win is answer the following question:

(Need a hint? Explore the Don Jon Tumblrpage and find out!)