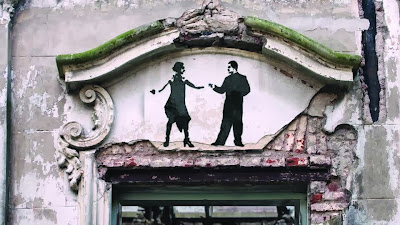 Ánima Buenos Aires is a struggle. It evokes comparison to Paris, je t'aime since it offers a cute little anthology film set in the exotic city of Buenos Aires, but it deserves more comparison to the dull mess of Paris’ follow-up, New York, I Love You. The four vignettes of Ánima Buenos Aires feel like four random shorts slapped together. Nothing connects them narratively, aesthetically, or thematically. There is no reason to show these films together aside from geography.


Ánima Buenos Aires brings together a quartet of Argentina’s finest animators as they collaborate and each offer a unique vignette that aims to capture the style and spirit of the city. The first sequence, “Down on His Luck” by Pablo and Florencia Faivre s tells of a paperman butcher who peddles meat to a collage of Argentines. “Down on His Luck” is a random, if not bizarre, romantic-looking episode that plays like a musical number. Argentines come to the meat market with a beat in their step and saunter off with slabs of pork, hoisting the prime-cut of pig like a tango partner. “Down on His Luck” portrays an old school Buenos Aires being eaten away by consumerism. There’s little room for the friendly butcher, as the city becomes overrun by contemporary corporations and everything turns to shit. The animators highlight the latter point by opening the sequence with an extended gag involving dog feces, which looks ickily real and foreshadows what is to come.

The second and third segments are by all regards forgettable. If one were making a tribute to Ottawa, these avoidable corners of Buenos Aires would be, say, Bells Corners and Vanier. The chapters, “Claustropolis” by Pablo Rodriguez Jauregui and “Bu-Bu” by Carlos and Lucas Nine, are beautifully composed vignettes that capture the city in sunny animation and darker shadows, respectively. “Bu-Bu” is certainly bound to wake some festivalgoers up when it opens with a vintage live-action gangster reel and transitions into gritty animation, but the two middle chapters of Ánima Buenos Aires are dully forgettable. (But they make a great forty minutes nap.)

If one’s body and mind can stay alert, they might enjoy the silliness of the final chapter of Ánima Buenos Aires, although “My Broken-Hearted Buenos Aires” by Caloi and Maria Veronica Ramirez is arguably the film’s most problematic piece. The sequence is vibrantly colourful as it takes viewers inside a dingy bar in Buenos Aires where a crotchety bartender wards off the romantic hang-ups that fuel his customers’ need for drink. “My Broken-Hearted Buenos Aires” sees the barkeep battle a never-ending series of imaginative bubbles that feature a sexy ample-bosomed vixen teasing “Yooo-hooo!” at drinkers and viewers alike. The chapter, while humorous, reeks of sexism, so festivalgoers might leave the film thinking that Buenos Aires does too.

Little holds these stories together aside from an interlude featuring graffiti art of a couple doing the tango along the walls of the city’s beautiful architecture. Ánima Buenos Aires is a well-intentioned entry into the vein of picturesque anthology films that have paid tribute to great cities, but the film collapses on its own pointlessness, as few of these shorts engage with the city itself and meander into silly follies that provide little entertainment or insight into the Latin American metropolis. It doesn’t help, either, that most of the sequences contain little to no dialogue and let viewers coast on the charming score as they struggle to keep their attention on the picture. Whereas some anthology films might provide a range of styles and stories to capture the city as a whole, Ánima Buenos Aires is a mix of ideas that don’t come together. The animation of each sequence is vibrant, colourful, and striking, but, unfortunately, this OIAF entry is a sad reminder that good animation alone does not a good film make.