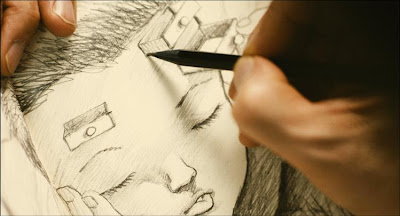 Jung was born in South Korea but was adopted by a Belgian family at the age of four. Jung knows few details about his life in Korea, aside from the year of his birth and the description written the adoption agent, “Colour of skin: honey.” It is therefore unsurprising that Jung grew up with his adopted family in Belgium feeling a hole in his life and wondering about the family and culture he left behind. Jung, now forty-two, returns to South Korea in Approved for Adoption and retraces his family.

Approved for Adoption tells Jung’s story in an exciting blend of animation and live action footage blended with Super 8 archival images taken during Jung’s childhood by his adopted parents. The mixed form tells an old coming of age tale anew. Jung, who grew up to be artist, adapts his own graphic novel into this animated autobiography that has inflections of documentary. Jung notes that drawing afforded him a chance for therapy and escape as he felt excluded within his adopted him, as his mother always treated him a bit differently from the children to whom she gave birth. She was always a bit harder on Jung than she was on the other kids, and this psychological distance was compounded by harsh discipline that saw Jung’s parents teach him a lesson via crops and whips.
Feeling like an outsider within his own family, the elder Jung recalls how this sense of exile caused a dangerous self-loathing towards his South Korean identity. It caused some romanticizing, too, as the animated Jung dreams of reuniting with his birth mother to repair the rift he feels within himself. Jung finally decides to reconcile with the past as he returns to South Korea and explore his journey to Belgium. The trip to South Korea, captured in live action, shows the real Jung exploring the city he long thought of as home. Throughout the live action scenes, Jung mediates upon how the constant struggle with identity and escapist role-playing of his youth—he often pretended he was Japanese—eventually led him to channel his energy into creativity.

The bulk of the film is comprised of beautiful animated scenes that represent Jung’s childhood in Belgium. The great thing about drawing, Jung says, is that one can imagine life how one likes it. The scenes from the past are honey-hued sepia, a nostalgic tone that reflects upon Jung’s youth with warmth for the family he is only now coming to understand during his journey. Approved for Adoption’s beautiful animation and sentimental coming of age tale are buoyed by a moving score by Siegfried Canto and Little Comet that underscores Jung’s retrospection with some acoustic rifts.

The animated sequences include some imaginative leaps as Jung conjures an idea of what his absent Korean mother might be like. Appearing as an elusive and ethereal figure, the mother Jung chases seems a more exotic interpretation than the blunt, hard-nosed white woman etched in the Belgian memory bank. Jung, in the live action scenes, eventually notes that this dream of finding his birth mother always skewed his perspective. Things look much sunnier when they exist as a fantasy, but it’s only through grounding oneself in reality that one finds any sense of closure.

The mixed form of Approved for Adoption therefore works brilliantly as Jung finds his own grounding in real life, but then uses his flair for creativity to rewrite and reimagine the childhood with the love he came to realize in retrospect. The animated return to the past lets Jung retrace his roots not to South Korea, but to Belgium, where his true family as he knows it began. Refashioning his life as a fable, Approved for Adoption lets Jung be both within and without his happy family as he situates his own sense of belonging into a hybrid world. Approved for Adoption is a playful study of family and memory, and art and reality as Jung finds the form that fits him best.

Approved for Adoption screens again:
Sunday, Sept. 22 at The ByTowne at 3:00 pm