OIAF Review: 'It's Such a Beautiful Day'

It’s Such a Beautiful Day 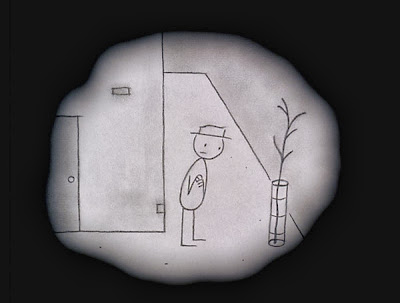 What a difference a year makes. The Ottawa international Animation Festival screened Don Hertzfeldt's It's Such a Beautiful Day last year in competition as a short film. It ran twenty minutes, yet I nearly fell asleep and I basically wrote it off when time came to review the programme. It's Such a Beautiful Day is back at OIAF, but this time it is screening as part of the feature competition. And this time I liked it much, much better.


This expanded version of It's Such a Beautiful Day consists a three of Hertzfeldt's short films including the aforementioned short of the same title edited into one feature. It's amazing what a little context can do to draw out the potential of a film. Put within the greater picture of Bill's stroke, It's Such a Beautiful Day is a much funnier and much smarter picture as a feature.

Bill, a trim, bare bones stick man with a hat he never sheds, struggles with the symptoms of a stroke. Hertzfeldt conveys Bill's confusion, disorientation, blurred vision, and hallucinogenic troubles by a mere twitch of his figure's eyebrows or, at the film's most formally incentive moments, by incorporating coloured, textured ruptures into the minimalist stickman sketches that throw the audience for a loop as they experience the chaos going on in their protagonist's head.

When It's Such a Beautiful Day moves into its final act, OIAF regulars are bound to recognize much of the short they saw last year re-edited into the feature. Bill's daytime stroll, for example, takes the stickman and the audience on a repetitive cycle. Each trip around the block poses a hilariously new experience for Bill—a fact that Hertzfeldt underscores by reporting the same narration on a droll monotonous loop. It feels new for viewers, too, as It’s Such a Beautiful Day’s poignant finale plays out in the greater context of Bill's mental decline. The film plays better as a feature since there is more time to empathize with Bill while Hertzfeldt moves the audience to laugh with the undeniable humour underlying the forgetfulness brought on by Bill's deteriorating brain. It felt more as if laughs were had at Bill's expense when It's Such a Beautiful Day screened in its briefer incarnation, but this lengthier version is unexpectedly moving as Hertzfeldt uses the only real device that can allow one to appreciate Bill's pain: laughter as a last resort against one's discomfort with illness and death.

It’s Such a Beautiful Day uses a deceptively simple design, yet the range of humour and emotion conveyed in the unpretentious stick drawings is remarkable. Bill’s story is endearing and loveable as the ironic voiceover describes Bill’s pain and tells in a deadpan voice all the crazy visions and fantasies rolling out of his mind: people catching fire, people being squashed by trains, or people with heads of animals. Everything bizarre is rendered normal in Hertzfeldt’s modest outlines.

Interludes of live action footage occasionally interrupt Bill’s rambling journey as he recalls memories that appear and quickly disappear from his mind. A quick flash of the leaves blowing in the wind, for example, as Bill recollects lying on the grass with that girlfriend he recognizes, but whose name he can’t remember. The fleeting memories are poignant punctuation marks as Bill’s life slips away into childlike drawings.

It’s Such a Beautiful Day is a pleasant return to Hertzfeldt’s touchingly wacky world. The film moves the audience through a range of emotions as it develops Bill’s story to the full in feature length. (Although, it admittedly feels like a long sixty-two minutes.) Like Bill’s short-lived memories, It’s Such a Beautiful plays like a new film experience regardless of whether one has seen it before.

It’s Such a Beautiful Day screens:
Saturday, September 21 at the ByTowne at 7:00 pm.

Don Hertzfeldt's IT'S SUCH A BEAUTIFUL DAY (trailer) from Cinefamily on Vimeo.