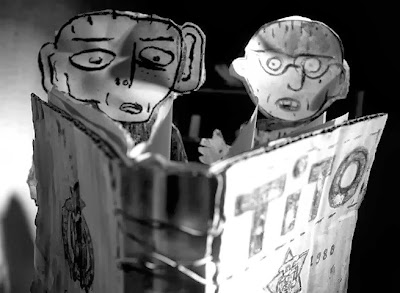 I have never quite seen anything like Tito on Ice. The film, which scooped the Grand Prize for Best Animated Feature at this year’s Ottawa International Animation Festival, is a unique hybrid of animation and documentary. It’s not necessarily something new to use animation in documentary film, but Tito on Ice takes form and meaning to new levels as it juxtaposes stunning paper cutout sequences with interviews and documentary footage shot on inexpensive DV. The film finds a kind of truth through its exploration of reality and fiction.


The film puts the benevolent dictator Marshal Tito on ice as comic creators Max Andersson and Lars Sjunnesson set off on a book tour throughout the countries of former Yugoslavia. Andersson and Sjunnesson, ever the agents of subversive humour, decide to revisit the war-ravaged country with a papier mâché corpse of the deceased political leader. The car trip, which is the main portion of the film captured in live action, allows the leader to witness the effects of war that broke out following his death.

The filmmakers interact with a number of fellow artists along the way who describe how the changes in their countries had a devastating effect on arts and culture. The interviews also note the personal toll of the war and convey how Tito’s death brought about a kind of cultural landmark akin to America’s milestone of remembering where one was the moment JFK was shot. The rotting corpse of Tito that the filmmakers truck around defies any romanticization of the man, though, as the road trip brings humorous encounters, including a run-in with border guards who all want their picture taken with the dead icon, against the backdrop of a landscape riddled with bullet holes and mines.

Looking to the past merely results in an ugly stiff, so Tito on Ice offers a counter-narrative to history in the animated segments scattered throughout the film. These sequences are darkly funny moments of structural surrealism. These strange black and white interludes offer a different, far more humorous account of history to contrast the sobering revisit in the live action scenes. The animated bursts are counter-cultural and radical, like the expression of artists who were censored during the years of war.

Tito on Ice is alternatively hilarious and informative as the comics wade further into the evidence of the war. Exploring the remains of buildings—empty shells riddled with bullet holes—Tito on Ice asks how a culture makes sense of itself in the aftermath of such devastation. The answer seems obvious: it does so through art.

The talks with artists and the interludes of punk-rock animation demonstrate a group of artists redefining themselves and expressing their anger and frustration, as well as their dreams and philosophies, through creative channels. Even one visit to an ingenious artisan demonstrates how one can literally take the remnants of war and turn it into something beautiful, as the filmmakers encounter a man who refashions artillery shells into works of art.

It’s hard to describe Tito on Ice in a way that does it justice. This is a radical and revolutionary film with a wholly informative account of history, but it’s as far from a textbook lesson as one can get. It’s both a powerful look at the horrors that war can bring and an alternatively poignant interpretation of the creative freedom that emerges after such a period of oppression. The bold, daring, and wickedly funny Tito on Ice is proof that creativity truly springs from madness.