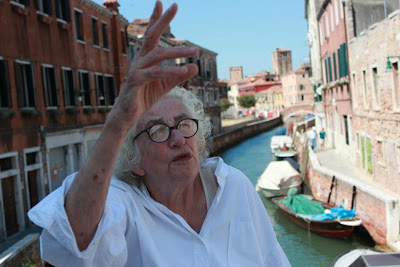 Venice looks as if it might be the most unique city in the world. All those gondolas carrying lovers around the city as they kiss and sip wine seems so romantic. The beautiful buildings, with doors that open into the canals, are as fine a piece of architecture as they are a novelty. Venice just looks like the most romantic, historical, and culturally-rich place to live. It’s no wonder that so many people want to visit.

The actual volume of people that do visit Venice each year, however, is staggering. The Venice Syndrome notes that the city’s remaining 58, 000 residents are inundated—and wholly eclipsed—by an average flow of 60, 000 tourists per day. That’s over twenty million visitors a year. Water isn’t Venice’s problem: the city is drowning in tourists.

The Venice Syndrome looks at how the iconic European city has been transformed into a veritable tourist trap. The inhabitants of the city make a living off feeding the tourists. One elderly Venetian named Trudy (a real character) squeaks through the exorbitant property costs by opening her house to the city’s revolving door of tourists. Other citizens peddle coupons in the piazza while others ship cargo. One Venetian named Federica has smartly adapted and learned Chinese so that she can prosper with the city’s unhealthy flood of tourists. It’s adapt or die for Venetians; however, as Federica observes, she’s selling a romanticized idea of the city to all its visitors. If only one could celebrate the real city because it is—was—such a thing of beauty.

The reality that The Venice Syndrome notes is that Venice’s popularity as a global tourist destination is killing the city at a rapid pace. The way of life for native Venetians has been utterly compromised, for a former gondolier named Giorgio can’t even shop at the local fish market without braving the flashbulbs, while Trudy notes that she now visits the square at two in the morning once all the rowdy visitors have dispersed. The commodification of public space is among The Venice Syndrome’s ugliest symptoms.

The physical city itself is being eroded by the flow of visitors since the increased number of bodies moving through the canals, in larger numbers and in larger boats, has added to a rough water effect that erodes the mortar supporting the buildings much quicker than small ripples from hand-held paddling would do. Other people simply can’t afford the city life, either, so more Venetians are migrating to the mainland while buildings sit empty for seasonal citizens to enjoy during the odd visit.

Venice is a beautiful city, but director Andreas Pichler portrays it as a once great-town that has been utterly bastardized by globalization. The Venice Syndrome captures the city in the sober hue of a digital camera and avoids postcard perfect compositions. The city still looks beautiful, but it hardly looks inviting when it’s framed with monstrous cruise ships towering over the villas like Godzilla ready to wreak havoc. The Venice Syndrome doesn’t hide what attracts people to the city and it doesn’t hide what the citizens find so unattractive about the city’s current state.

People don’t stop and enjoy the city as they used to, Giorgio observes, for in the days when he paddled the gondola, tourists afforded the city some stability by staying for an extended vacation. Nowadays Venice is just a scenic pit-stop en route to Rome and the Vatican. The city’s a dormitory, observes another of the film’s personalities, since people come and go with little appreciation for the experience. Visiting the city amounts to little more than standing in the square, observing it through the panoramic viewfinder of an iPad, and saying “What’s for lunch?”

The Venice syndrome appears like a symptom of a greater cultural decay. It’s a way of life that’s eroding with the great city of Venice. There is no room for a culture that makes time to enjoy the sights, sounds, and tastes of its own city. History and legacy takes a backseat to Timelines and Profile Pics. This expository doc provides a much different outlook on the city one sees in postcards. The Venice Syndrome depicts the city as seen through the eyes of its remaining inhabitants who have lost their way of life to peddle the ghost of Venice as a souvenir for tourists.

The Venice Syndrome screens in Ottawa at The ByTowne from Sept. 4-8.