TIFF Review: 'Around the Block' 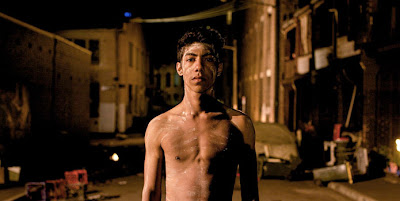 Christina Ricci delves into full Michelle Pfeiffer mode in Around the Block, aka Australian Dangerous Minds. Around the Block is a familiar story of an outsider teacher who wades in to a high school populated with students from rough urban environments and vows to take a stand against racism, class, and perceptions of social determinism. The premise, tried and tested, always makes for a compelling payoff, and Around the Block is no exception. Writer/director Sarah Spillane, making her feature film debut, provides a perspective to the story that remains relevant.

Dino’s (Ricci) school is in an inner suburb of Sydney called Redfern, dubbed the Block, which houses a significant population of Australia's indigenous persons. Dino, an American, decides to show her racist white Australian fiancé and co-workers that the children of the Block can aspire to far greater things than people give them credit. Her project to inspire the students and townspeople is to stage a rendition of Shakespeare’s Hamlet with a predominately black cast and inflections of Australian indigenous culture infusing the production.

Clichés abound in a premise that delivers, but has been done countless times before. (Mind you, so has Hamlet.) Take Ricci's monologue, for example, in which she parallels Shakespeare with Tupac Shakur to show her students the meaning and syntax of the Bard's verse. The scene is effective; however, it's nearly verbatim of Tom Courtenay’s lesson in Quartet about the similarities between opera and hip-hop. It’s unlikely that Spillane had a chance to see Quartet before scripting Around the Block, but the formula of Around the Block adheres to well-tread terrain aside from using the familiar narrative to realize an urgent story about deep-rooted racism that still exists today. Spillane also adds a pointless lesbian subplot, which isn't needed since Dino is already marked as an outsider on several levels. (It also doesn’t go anywhere.) Ricci gives a compelling performance, though, and has a strong rapport with the young actors as Dino shares her passion for theatre with the class and school.

Spillane lets some of Hamlet's subtext permeate the film as Dino mentors a troubled student named Liam (Hunter Page-Lochard, in the film’s standout performance) whom she sees as a kind of tormented prince. The better scenes of Around the Block go outside the school and into the streets of the block to explore the gang violence that makes coming to school such a burden for Liam. Around the Block rises above the formula of Dangerous Minds clichés in its strong third act when Liam takes control of the film in a powerful dance ritual atop a seaside cliff. The scene is the visual equivalent of Hamlet's speech of “To be it not to be” in both its depth and poetry. Hamlet, like the “Michelle Pfeiffer meets urban school” thing, can be repeated as often as one wants when it displays a spark of creativity like the one Spillane does in that one breathtakingly shot sequence.

Around the Block screens at the Festival on Friday, Sept. 13 at the Bloor Hot Docs Cinema at 9:00 pm.