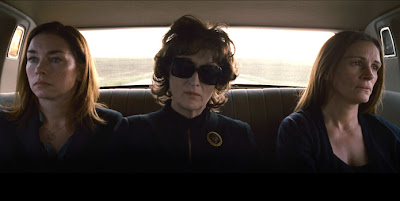 August: Osage County, of all the films waiting to be unveiled at the Toronto International Film Festival this year, was arguably the one for which festivalgoers had the highest expectations. Deliver on those expectations, August: Osage County most certainly did, and it did so with a capital D. August: Osage County had a high bar to meet considering that the source play by Tracy Letts won a slew of awards including the Tony and Pulitzer Prize. The film will doubtlessly add more hardware to the A:OC awards tally if the booming reception both during and after the film's Tuesday screening at the VISA Screening Room is any indication.

I should start by noting that I have neither seen nor read the play on which August: Osage County is based. However, any power that the venomous Violet Weston has on stage is surely amplified to the hilt in Meryl Streep’s bravura performance in August: Osage County. (Which, by the way, is most definitely a lead role.) Streep outdoes herself (again) as the acid-tongued matron of the Weston family whose fraught family relationships are reignited when her husband, Beverly (Sam Shepard), takes off.

All the Westons return to Violet to comfort her as they wait for Beverly to come home. One of the three Weston sisters, Ivy (Julianne Nicholson), has remained by Violet's side in Osage County, and the two other daughters, Barbara (Julia Roberts, sharing the screen with Streep for the first time) and Karen (Juliette Lewis), return after skipping town to escape Violet's unrelenting criticism that has become Ivy's sole burden. Also joining the dramatically bereaved Violet are her sister Mattie Fae (Margo Martindale, reuniting with Streep after Marvin's Room), her husband Charles (Chris Cooper, reuniting with Streep after Adaptation.), and their disappointment of a son, Little Charles (Benedict Cumberbatch, aka Mr. TIFF '13).

The Weston Family reunion is a veritable Southern brouhaha as the cackling family members reunite and reignite the old tensions that drove them apart. The explosive family drama has a sense of Carnage-like claustrophobia as director John Wells (The Company Men) uses the space of the film’s limited setting to drench the atmosphere in the suffocating heat Violet’s grand old stuffy estate. Wells makes a notable step forward with his second feature by providing an ensemble-driven film that is fuelled by uniformly excellent performances and a firecracker of a script. August: Osage County resembles black comedy with the speed of the delivery and nastiness of the dialogue that fires cynicism at gut-wrenching and gut-bursting speed.

A pivotal dinner sequence, meanwhile, has the atmosphere of a family dinner in a horror flick. Gathering at the table and being subjected to the scorn Violet dishes out with relish seems like a form of murder most foul. It's no wonder that so much of her family resents her. It’s also no wonder that such a darkly humorous family gathering has its roots in the words of Tracy Letts, the writer whose Killer Joe tormented audiences with a family sized servings of Southern fried chicken last year. There's no fried chicken in August: Osage County, but catfish will forever now be served with a side of “Eat the fish, bitch!”

This bitchy catfish needs a side of Southern gravy to toast Meryl Streep’s award-calibre turn that more than meets the elevated expectations that awaited it. Violet is a doozy of a part, as she is a battling a host of demons. She's addicted to painkillers, which amplify her volatile mood and penchant for meanness. The painkillers are a prescription for the mouth cancer brought on by years of heavy smoking, although the tumors could really be a product of all the toxic venom Violet spews from her mouth.

Streep inhabits the awful woman with terrifying force. Brusque and unnervingly intimidating even behind the oversized sunglasses she wears, Streep once again uses all the tools at her disposal to create a character that is full and real. Her gruff, deep accent rasps of Violet’s years of smoking and her Southern drawl rolls out every note of pleasure Violet derives in mocking her family members. Streep draws out the two sides to Violet’s persona that only the most intimate members of the Weston family—namely Ivy and Barbara—get to see.

Streep steps in and out of Violet’s bipolar personalities as the Weston matron sheds her disguise and emerges her sick old self. Violet’s true nature seems to simmer as Streep looks frail and defenceless outside of Violet’s wig and intimidating clothes. She’s kinder (relatively) and more human. It looks as if Streep shrinks as Violet reveals her vulnerability. Streep becomes more verbose when Violet puts the costume back on, goes into attack mode and chews the scenery like an actor playing it big. Meaty roles don’t get much bigger than this, though, and one sees the endless possibilities in interpreting Violet as Streep fiddles with Violet’s wig as the mother betrays her discomfort, or toys with Violet’s cigarette like Margot Channing might do before she tells us to buckle up and brace ourselves for a bumpy night. Streep’s Violet is a deliciously unlikable character.

What a wild and bumpy night August: Osage County is as each member of the cast performs on Streep’s level. Julia Roberts, for one, delivers her best performance since her Oscar-winning turn in Erin Brockovich. It’s still disarming to see America’s Sweetheart play a character so ominously unpleasant. Roberts isn’t afraid to let the audience turn against the character that seems like the target for sympathy as the sisters first return to Osage County. Barbara slowly devolves into the woman she detests as Roberts gets meaner and meaner and Barbara becomes more like her mother with each day she stays.

Standing out among the supporting players—all of whom deserve a paragraph of their own—are Nicholson and Martindale as Violet’s daughter and sister, respectively. Nicholson gets the tricky part of being on the receiving end of Violet’s dismay, but she provides a roster of heartbreaking reactions as Violet cuts deeper and deeper into Ivy’s heart and/or back. Martindale, on the other hand, is a hoot (as always) as the sister with the big personality. She has the comedic timing to match Streep and the range to show the pain Mattie Fae hides with all her self-effacing humour. Both actresses are highlights in one of the best ensembles of the year.

August: Osage County is a wickedly funny tale of family ties that bind. Relationships with folks like the Westons can hold people together, but they can also tie them down. Wells ends the enjoyably cynical family saga on a note of hope by finding freedom in cutting ties and walking away when the damage is done. A happy ending might seem out of place in August: Osage County, but such criticism almost seems unfair when Streep and company already have one grinning from ear to ear.

Update: August returns to Ottawa at The ByTowne March 27.