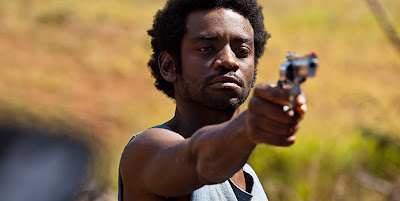 Is this film a gangster pic or a western? Well, it’s both and smartly so. Providing a protagonist who is both a noble lone hero and a rugged outlaw, the lawlessness of the Wild West meets the tensions of gangland Brazil in Brazilian Western. Our hero, João Santo Cristo (Fabrício Boliveira), becomes both a radical and a symbol for a greater cause in his quest for freedom and retribution. René Sampaio’s Brazilian Western is an exciting fusion styles and tropes and an exhilarating exercise in the fluidity of genres and national cinemas.

The film is loosely based on the legendary folk song “Faroeste Caboclo” by Brasilia rock band Legiao Urbana, which plays atop the film’s end credits. “Faroeste Caboclo,” a powerful anthem, tells a fable of a young man named João Santo Cristo who leaves his barren provincial homeland following the deaths of his parents and looks for luck in the city. João Santo Cristo, however, was born into Brazil’s extensive history of racism and he has always grown up an outsider.

João, a black Brazilian, winds up in Brasilia where his Argentine cousin provides him with some carpentry work on the condition that he also peddles drugs on the side. Drug running in the dense, violent streets of Brasilia gives João an even greater insight into the cultural divides running through the nation. White junkies and cops alike spit “nigger” at João between drug deals and beatings.

Sampaio alternatively flashes back to João’s childhood during some of the film’s most intense and pivotal moments. A run-in with the cops, for example, reminds João of the day he saw his fathered murdered in the street by a lone police officer. João had revenge and went to prison for killing the cop in turn, but this new chapter in his journey refuses let the system continue. Like a rugged street-smart cousin of John Wayne, João vows to avenge the Brazil that has fallen before him. He’s a symbol of the nation himself, for he is a child of the impoverished favelas that border the city. Losing his mother to hunger and his father to violence, João is a stand-in for Brazil’s outcasts.

There’s a positive outlook on the horizon for João when he takes refuge in a girl’s apartment during a run from cops and crooks. Maria Lúcia (Isis Valverde), the daughter of a senator and a citizen of Brazil’s fair-skinned upper class, takes an instant liking to the mysterious Romeo who pops in through her balcony window. The currents of racial prejudice are still plain, though, in Maria Lúcia’s effort to conceal their relationship from her father.

The love story nevertheless drives another layer of cultural fusion in Brazilian Western. The affair between João and Maria Lúcia is passionate and sexy. Sampaio provides several rough, fiery love scenes between the two as they cast prejudice aside and come together. Brazilian Western even offers a symbol of hope for the future, an expected child, but the ballad of “Faroeste Caboclo” ensures that the ill-fated love triangle rejects the easy closure one sees in a Hollywood ending. João and Maria Lúcia ride not into the sunset together, but offer optimism for new beginnings. It’s the demise that a gangster usually meets as well as the westerner’s typically heroic final of paving the way for the future.

The exciting flavour of fusion rings throughout Brazilian Western. Indebted to the folklore of one popular Brazilian song, the soundtrack is also peppered with popular American tunes of classic rock. One particularly memorable sequence sets João’s rise through the drug trade to the beat of Nancy Sinatra’s “These Boots are Made for Walkin’” and the familiarity of the tune situates the urban jungle of Brazilian Western as a war zone à Full Metal Jacket.

Aesthetically, the film should please many cinephiles that have discovered Brazilian cinema in the wake of City of God and the Elite Squad films. Shot by Gustavo Hadba, the film affords the landscapes and urban spaces a life of their own and captures the João’s tale with a poetic eye for social surrounds. The editing by Marcio Soares is kinetic and vibrant: Brazilian Western is an adrenaline-charged adventure until its violent final.

The style of Brazilian Western has ample nods and inflections of American cinema, but Sampaio gives it a voice of its own that remains unique and faithful to the cinema of Brazil. Investing the fable with a substance that’s usually absent in Hollywood cinema, Sampaio uses this violent tale to convey a parable about the greater viciousness—racism, class, and poverty—that breeds such violence. Rather than merely imitate the success of Hollywood, the accessible familiarity of Brazilian Western brings to life a voice of political urgency. It’s a western done in the vein of Cinema Novo as it depicts the poverty of Brazil’s poorest classes in need of a hero. Sampaio’s careful integration of João’s backstory ensures that the poverty and discrimination he faces is both felt and understood as the hero moves towards his destiny. It’s a highly entertaining and smart, socially-relevant film. Brazilian Western affords just the kind of discovery one hopes to see at the Toronto International Film Festival this year.

Please visit www.tiff.net for more information on this year’s festival.