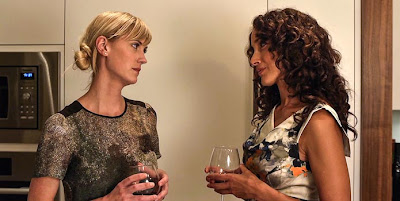 Cinemanovels, the newest maplecore film from Indie Canadian filmmaker Terry Miles (A Night for Dying Tigers), is an ambitious and innovative tribute to the canon of Canadian cinema. Miles reunites with Tigers alumnus Lauren Lee Smith, who stars as a young woman named Grace Laurentian who is putting together a film retrospective for her late estranged father. Grace’s dad, a Denys Arcand type director, was one of the greatest filmmakers of all time according to the onscreen pundits, not only for Canada but also for the world. His death is equated with the losses of Bergman and Antonioni.

As Grace shuffles through the copies of his films on The Library Collection, Miles offers a series of glimpses into the oeuvre of this legendary Quebecois filmmaker. Each snippet is a homage to a roster of great auteurs, so Cinemanovels contributes to a culture of cinephilia by situating this great Quebecois director, whose style looks like a hodgepodge of everything from Egoyan to Almodóvar, into a diverse canon of world cinema. The stranger thing about Cinemanovels is that Laurentian’s films, the films within the film, all seen like self-parody. These ultra-arty films featuring sexual awakening with bows and arrows are, intentionally or not, often ludicrous and hilarious with their overwrought symbolism and stylized nouvelle vague cheapness.

The little meta-films of Cinemanovels, however, also act as little mise en abymes for how all over the map this well-intentioned little movie fires. As Grace dives further into her father's filmography, she begins to mirror the behavior of his onscreen muse and act out on a series of erratic sexual acts. Messy storylines with unwanted pregnancy, unrequited love, and infidelity all generate a sense of art house chaos that doesn’t really work. Lauren Lee Smith is sensational in the lead role of the distressed cinephile, but she can't save this sprawling, messy picture from its own misfires.

Smith is joined by a mix of supporting players, most notable get fellow Tigers co-star Jennifer Beals, who salvages a thankless role that could easily have been scrapped in the editing room. Miles nevertheless displays another competent creation of dynamic and fully believable characters, especially the females, as he did in Tigers. The minimalism of Cinemanovels often has a unique authentic energy, but the film is a mush mash for a film that is so markedly indebted to cinema.