TIFF Review: 'The Disappearance of Eleanor Rigby: Him and Her'

The Disappearance of Eleanor Rigby: Him and Her 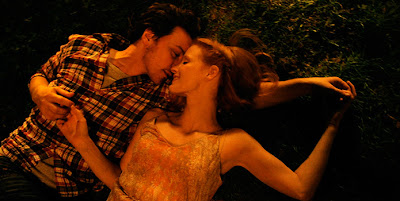 The Disappearance of Eleanor Rigby: Him and Her is a Rashômon­-esque pas de deux. The film, a double shot of his and her love stories, is a profoundly moving meditation on the shared emotion of love. The film consists of two halves, Him and Her, which could act as stand-alone features but must truly be appreciated as complementary parts of a whole. The film screened in differing stages at this year’s Toronto International Film Festival screenings of Eleanor Rigby alternating with a set list of Him then Her or Her before Him. I caught the former sequence of Eleanor Rigby and I can’t imagine seeing it any other way.


The Disappearance of Eleanor Rigby: Him seems like essential groundwork for the material in The Disappearance of Eleanor Rigby: Her. To see them in the opposite order might be like learning the answer to a riddle before it is even asked. The film needs to forgo the gentlemanly adage of “Ladies first” so that it may set-up the payoff of its second half. Alternatively, the film might work in either order, as the question of differing perspectives is what the film is really all about.

Eleanor Rigby (Jessica Chastain) disappears in Him following the grief of losing a child. Her marriage with Conor (James McAvoy) can’t survive the inevitable distance that the death of a child creates between parents, so Eleanor walks out on Conor one fateful day. Conor spends the rest of his story chasing his wife with hopes to reclaim the love they lost. Writer/director Ned Benson, making an astonishing pair of feature debuts with Him and Her, limits the information surrounding Eleanor’s disappearance as Conor re-examines the dissolution of their relationship.

The questions are largely answered in Her when Benson gives Eleanor the lead role in her own story and Conor becomes a ghost on her trail. Eleanor Rigby is an entirely different person as Her lets the audience experience the pain that drove her away from Conor. Thanks to Chastain’s full, immersive performance in the title role, Her shows the audience a woman who lost herself entirely. Eleanor’s need to escape and start anew is completely understandable when things are seen from her perspective. The Disappearance of Eleanor Rigby allows the audience to sympathize with both him and her when viewed in such an order, as it begins by putting the audience on Conor’s side when Eleanor disappears, but then allows viewers to appreciate the full picture when Eleanor’s story is revealed. The film has a way of shifting allegiances without ever betraying either party.

It’s the interplay between Him and Her, though, where The Disappearance of Eleanor Rigby finds its magic. Benson marks the film with subtle difference to show the varying perspectives that two people can glean from the same encounter. Memories change and interpretations blur with time and feeling. A shirt might be blue in one recollection and white in the other. Lines differ and context changes. The meaning behind an inconsequential line shifts with the emotion inferred by one, while the memory might be forgotten for the other. Some scenes in The Disappearance of Eleanor Rigby play out differently in their entirety, with scene blocking and dialogue altering radically, thus defying any chance of the audience deriving a clear conception of the truth. The only reality that matters in the world of The Disappearance of Eleanor Rigby, though, the love between the two that makes the split from “them” so painful. One notably different scene for example, plays like a confession for him and a betrayal for her. Similarly, and most movingly, a snippet of dialogue might be little else than a statement of fact of Conor, but it plays like a verse of radiant poetry in Eleanor’s mind.

Benson tackles this multifaceted dance between perspectives with a master’s hand, creating some key set pieces that linger in the mind of viewers and inform the memory of the film as a whole. The opening sequence of Him, for example, is a lovely twilight dinner dash that captures the early romance between Eleanor and Conor before it shattered. Minute details from this scene pepper Her with the memory of Conor, so Eleanor cannot reinvent herself entirely in one’s eye and escape the persona one saw before. Other subtle details, like the astute use of shallow focus and rack focus—far more perceptible in Her than in Him—underscore the different outlooks and ways of seeing. Chastain and McAvoy are excellent playing both the lead and the supporting player in the complementary stories, and they’re supported by a great cast that includes Viola Davis, Isabelle Huppert, and William Hurt, who appear in varying degrees in both films, or barely at all in one depending on his or her significance to the film’s significant other.