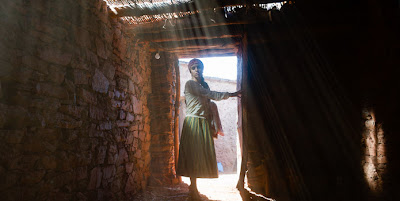 Caroline Link won the 2002 Oscar for Best Foreign Language Film for her extraordinarily moving Nowhere in Africa. Set in wartime 1930’s, Nowhere in Africa tells of an ex-pat German Jewish family starting life anew in Kenya as they escape the Nazis. Link returns to Africa once again in Exit Marrakech and she provides another poignant story of a foreigner in a strange land.


The scope of Exit Marrakech is much smaller than that of Nowhere in Africa, yet Link blends the breathtaking and expansive landscapes with an intimate tale of fathers and sons. The journeyman in this tale is Ben (newcomer Samuel Schneider), a German boy who flies to Morocco on the eve of his seventeenth birthday to visit his father. Ben, a child of a broken family, feels estranged to his father. The distance that separates the two is tangibly symbolic.

Ben’s father, Heinrich (The White Ribbon’s Ulrich Tukur), is equally weary of this time for family bonding that interrupts his international theatre tour. Old wounds are reopened as neither father nor son acknowledges the gap between them. The awkwardness prompts the rebellious Ben to go explore the city on his own and find a reason for being there.

Link quickly puts Ben in various scenarios that mark him as a young and unfamiliar idealist. White and privileged, he stands out in the city. Ben literally gives some Moroccan boys the clothes off his back during an early exploration of Marrakech’s streets. He’s young, naïve, and optimistic: Ben is the heroic outside we’ve seen travelling the sandy streets before, although Link takes him on a journey that is a coming-of-age tale and an eye-opener both.

Ben’s idealism takes him far from the streets of Marrakech when he befriends a young prostitute named Karmina (Hafsia Herzi) and follows her back to the small village from which she hails. It’s an awkward family reunion as Karmina hands her money over to the family and her mother assumes Ben to be one of her Johns. Ben, on the other hand, struggles to grasp the customs and traditions he encroaches upon by inviting himself into Karmina’s home. Ben, unable to grasp the disconnect he feels between Karmina’s lifestyle in the city and her modest behaviour in the country, receives his first notable reality check during his stay in Morocco. The trip to Karmina’s village teaches Ben a lesson that one person can’t play the hero and save everyone he pleases; moreover, and more importantly, Karmina’s reluctance to let Ben into her family’s private life teaches Ben that no outsider has the right to enter a foreign land and impose his or her worldviews on another.

Link employs the exotic backdrop of Marrakech as a symbolic foreign land. Ben and Heinrich, once reunited, take a road trip of sorts into the uncharted restoration of their relationship. The return journey through the desert and back to Marrakech puts their old ghosts in check and gives both men a chance to grow up and see both each other through fresh perspectives. The trip might not afford Ben the chance to play the role of the heroic westerner, but it allows him to save his relationship with his father by giving Heinrich the opportunity to be the parent he never was.
The trip back from the desert is far longer than the journey there, as is always the case for most vacations, as it takes Ben and Heinrich on a winding road of finding a balance between freedom and responsibility.

Link conveys this push-and-pull tension driving Ben's maturation by adding an underlying conflict of his struggle with diabetes. Ben, faced not with a condition that isn't necessarily a disability or a disadvantage, wakes up every day to manage an aspect of himself that is never fully in his control. Each step of the journey allows Ben to grow, but each step becomes more arduous physically as he gets further away from the comfortable lifestyle that had allowed him to be so rebellious, yet physically fit. He’s required to step back in some situations and prioritize his responsibility to himself over the thrill of escape.

It’s the same for Heinrich, who pursues his artistic and academic endeavors fanatically at the cost of his personal relationships. Heinrich, unlike his son, prefers to taste Morocco through books and plays. The trip along the road, however, provides a life lesson one could never derive through print and stories. It’s the journey of lived experience that allows both men to grow.

Link traverses terrain both new and familiar in Exit Marrakech and the result is a universal tale of family ties. The film might not have the same substantial backdrop as Link’s previous trip to Africa, but Exit Marrakech nevertheless provides a touching fable about finding one’s place in the world, whether it’s a matter of situating oneself in a family or in a nation. The family drama of Exit Marrakech is consistently compelling thanks to the engaging performances by Schneider and Tukur. The best presence in the film, however, is the character of Marrakech itself, shot by cinematographer Bella Halben with both the romanticized filter of Ben’s tourist gaze and an air of sobriety that lets the land and people speak for its self. Exit Marrakech might not always hit the heights set by its predecessor, but it’s arguably a fine film in its own right.