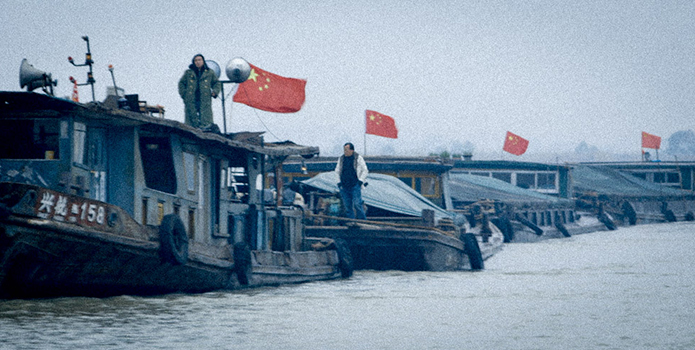 “If you came for a love story, this is not it,” narrates Dodo in the intriguing opening sequence of Johnny’s Ma’s A Grand Canal. A Grand Canal, one of the more formally inventive and emotionally rewarding films screening in the Short Cuts Canada programme at the Toronto International Film Festival this year, begins with a wedding. It seems as if the story of A Grand Canal will be all happy smiles as the camera observes a bride and groom say “I do,” but the film then freeze-frames on the couple as Dodo foretells the story to come.


The film is about a man seated at the wedding. A slow zoom focuses our attention on this man seated alone at a table. He’s Dodo’s father, who, as the narrator continues to explain, also makes a living as the captain of a shipping boat. Dodo recalls how his father’s career demanded that he be gone for months at a time. Dodo filled the absence by recalling pop songs that his father would sing to him. The songs are always by the father’s favourite artist, Liu Huan, whom Dodo’s father adored so much that he even grew his hair into the singer’s signature ponytail.

A Grand Canal might not be a love story, but the buoyant songs Dodo recalls certainly suggest that this is a film about love. The Mandopop provides an escape for both the father and the son, as they use the melodramatic music to feel deep within their hearts. The songs, as enjoyably cheesy as they are, grant a kind of poetry to A Grand Canal as they become increasingly incongruous with the story that unfolds onscreen.

Ma captures this story of fathers and sons with an unusual energy. The camerawork by Wang Yifan enters the drama like a passerby, or like an observer who begins watching from a distance and then moves in for a closer, more intimate look. The excellent cinematography in A Grand Canal is highly involving with how it approaches the subject, whether with a Steadicam or a zoom, and it centres the father in salient compositions against the backdrop of his beloved canal and boat. The film’s grand wedding scene is a striking centrepiece, not only for the impressive production of the grand affair, but also for the emptiness it brings into the father’s life as he slips into the backrooms of the banquet hall and pleads to save his family. The father, played in a moving performance by Mei Song Shun, carries the heft of the story’s tragic narrative and captures both the lightness and the optimism of the breezy pop songs dispersed throughout the film.

A Grand Canal pushes the boundaries of film form as it progresses and as Dodo’s—and, in turn, Ma’s—reminiscences of the father become more personal and intimate. Blurring the lines between drama and documentary, art and life, and tragedy and comedy, Ma crafts a compelling tale about personal history and the cathartic power of storytelling. Especially powerful is the filmmaker’s ability to shift one’s emotions during the film using the silly pop songs peppered on the soundtrack. The music of Liu Huan that the father and Dodo so enjoy might at first seem funny, but Ma’s unfolding of the story grants the music a depth not written within the words. A Grand Canal conveys the personal investment we have with music and the arts, and tells of how even the most sugary of pop songs can nurture the soul. A Grand Canal is a fine marriage of art and life.

Remember that some of the shorts will also be playing online 24 hours after their public screening, so please check http://www.youtube.com/tiff and see if A Grand Canal  is one them!

Please visit www.tiff.net for more info on this year's festival.