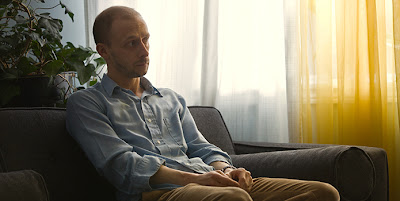 Bruce McDonald brings the mojo to #TIFF13 with the smart black dramedy The Husband. The film, directed by McDonald and written by star Maxwell McCabe-Lokos and producer Kelly Harms, is a bitingly funny study of masculinity. McCabe-Lokos stars as Henry, a downtrodden ad-man whose manhood is crushed when his wife Alyssa (Sarah Allen) goes to prison for having sex with a fourteen year old boy. How emasculating.


Henry stands by his wife, though, even though many husbands might have walked away from such an embarrassing—and repulsive—infidelity. Henry continues to care for his son and visit Alyssa in prison, but each trip to the slammer spirals his life into a greater wreck. It might not be surprising to viewers that Alyssa strayed from such a grade-A fuck-up, as Henry acts more childish than the lover who earned his wife a charge for statutory rape.

McCabe-Lokos gives a strong performance as Henry, who has been rendered limp and impotent (figuratively) by his wife's betrayal. Saggy and slouchy, dejected and downtrodden, McCabe-Lokos is the antithesis of macho rage as Henry fuels his anger into manning up. Allen, on the other hand, gives a nuanced turn as Alyssa and makes Henry’s source of shame a surprisingly sympathetic counterpoint to The Husband’s manly musings.

Adding to the odd appeal of The Husband is a great soundtrack—one expects no less in a McDonald film—and a strong supporting cast that includes German star August Diehl and Canuck veteran Stephen McHattie. McDonald surprises with his direction of The Husband by finding a subtlety amidst the black humour that he hasn’t used before. The Husband has fun with Henry’s odd situation with quirky set pieces of physical comedy in which our anti-hero never seems at ease. One hilariously creepy attempt to play it cool with the babysitter is especially funny, but also finely effective in suggesting to the audience how easily Alyssa might have slipped into the affair that threw Henry for such a loop. One almost expects the energy of something like the sausage fest of Hard Core Logo to pop up in this study of what makes a man, but The Husband shows a maturity in McDonald’s hand behind the camera, as he allows the unimaginable absurdity of Henry’s dilemma unfold in the perceptibly real—and eerily relatable—streets of Toronto.

The darkly funny character study of The Husband sees Henry confront the young man as he in turn confronts his own insecurity of what it means to be a man. As Henry stalks his foil amidst Toronto's familiar sights—no filmmaker makes Toronto quite as integral a character to a story as McDonald does—he learns to redefine manliness through, strangely enough, some fairly juvenile behaviour. It’s takes a hilariously slapstick piece of physical comedy for Henry to learn than the bigger man is one who doesn’t hit back.