TIFF Review: 'Our Man in Tehran'

Our Man in Tehran 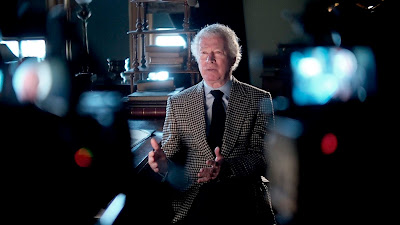 Last year's Toronto International Film Festival hosted the World Premiere of Ben Affleck's wildly entertaining blockbuster Argo. Controversy followed the TIFF screening as the film ended its thrilling embellishment of the 1979-1981 Iranian Hostage Crisis, for which Canada played an especially important role in sheltering and rescuing six Americans who escaped the siege on the American Embassy. The feat became dubbed “The Canadian Caper” and it made national heroes out of Canadian Ambassador Ken Taylor, his wife Pat, and the team of Canadians at the embassy in Iran who took part in saving six of Canada’s neighbours.

Argo takes some liberties with the truth in the process of creating an exhilarating piece of escapism, but some viewers also found that the portion of the story Argo tells in its two-hour running time diminishes the efforts of many parties involved in the mission, especially Taylor, who undertook enormous risks with the additional work he performed for The American government. Our Man in Tehran, a new documentary on the Iranian Hostage Crisis, gives a fuller and more comprehensive view of a Canadian story that hasn't been told in the detail it deserves. Our Man in Tehran puts the Canadian back in The Canadian Caper and gives Taylor and his peers due credit.

Directors Larry Weinstein and Drew Taylor (no relation to Ken and Pat) tell the story of The Canadian Caper from an informed and decidedly Canadian point of view. The filmmakers allow a roster of participants from the mission explain the events of the Iranian Hostage Crisis with insight and detail. Ken Taylor, the proverbial “Man in Tehran” gets the starring role as he describes in his own words the actions he and other staffers at the Canadian Embassy in Tehran took to save the lives of the six Americans. Taylor intuitively—and diplomatically—elaborates upon the political implications entailed in the Canadian government's participation in the event, especially his additional cooperation with the American government in the covert planning of a military rescue mission aimed to free the remaining hostages from the embassy.

The film also provides significant insight into efforts taken by Canadians in North America to help facilitate the escape of the hostages. Former Prime Minister Joe Clark, for example, recalls how he swiftly gave the Taylors his support after receiving some urgent advice from then Minister of External Affairs Flora MacDonald. Especially radical was the decision of the Canadian government to falsify Canadian passports that allowed the Americans to escape Iran safely. The actions went far beyond playing host.

Our Man in Tehran (thankfully) makes no mention of Argo as it chronicles the exfiltration mission of the now famous “best bad idea” that smuggled the six Americans out of Iran under the guise of a Hollywood film crew preparing for a sci-fi movie. The other idea, Taylor notes, was to make the escapees out to be a documentary film crew in Tehran to make a sympathetic portrait of the revolution. (How Canadian.) The gung-ho American enthusiasm to turn an escape into escapism is therefore captured with a fun degree of accuracy in either cinematic rendering of The Canadian Caper.

As Taylor and Weinstein allow several of the primary participants to explain the unfolding of the events, they also invite many Americans from the hostage crisis to explain how the escape unfolded. Included among the interviewees is CIA agent Tony Mendez, as well as several of the Americans who escaped the embassy and some who did not. The film therefore gives a distinctly Canadian perspective on The Canadian Caper, but it doesn’t do so at the expense of the fuller picture. The event was a collaborative effort in diplomatic relations, so Our Man in Tehran appropriately takes an objective and diplomatic tone and works to acknowledge the many heroes who participated in this chapter of history.

Equally important is the film’s attention to the details of Iran’s socio-political climate that precipitated the crisis in the first place. Our Man in Tehran illuminates the backstory of the events, which in turn accentuates the gravity of the stories proffered by the interviewees. The film, edited by Steve Weslak, moves at a swift pace and unfolds the story in riveting detail.

Our Man in Tehran does justice to its subjects and acknowledges the true-life heroes behind a great Canadian story. It’s fitting to see Ken Taylor speak eloquently and diplomatically, and get due credit in a comprehensive, informative, and, above all, vastly compelling film. Our Man in Tehran is proof that a film doesn't need to sacrifice the facts in order to tell a great story.

UPDATE: Our Man in Tehran screens in Ottawa at The Mayfair Jan. 28-30