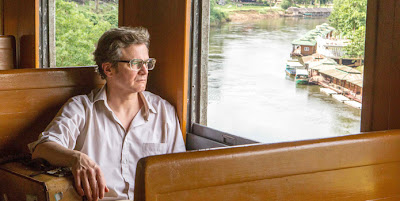 Academy Award winners Colin Forth and Nicole Kidman finally share the screen in The Railway Man, the true life story of war survivor/railway enthusiast Eric Lomax. Firth gives an excellent performance in the lead role as the man haunted by memories of the past. His meticulously detailed performance does for post-traumatic stress disorder what his performance as the King George did performance for glossophobia, confidence, and leadership in The King’s Speech. Kidman is equally fine in a supporting turn as Eric’s wife, Patti, whom Eric meets on, where else, a train. The stars have good chemistry as they honor their real life subjects but forge a creative interpretation of a tale that’s a romance and thriller both.


The Railway Man cross cuts from pay to present as it dramatizes Eric's story as he grapples with the haunting memories of his time as a wartime prisoner. Eric, probe to night terrors and paranoia, refuses to open up to his new wife, so she visits a war buddy, Finlay (Stellan Skarsgard), with whom her husband remains in contact. The film flashes back to the sweaty banks of Burma as Finlay tells to Patti the story of Eric’s torture and imprisonment following their capture by the Japanese. The younger version of Eric is plagued by Jeremy Irvine (War Horse, Great Expectations) and he provides both a physical and creative match for Firth.
The irony of Eric's imprisonment is that the Japanese force the captured men to build a railroad. Eric's passion becomes his thus becomes his curse—notice how ill at ease he seems during the first encounter with Patti. He hardly looks hey in the eye and one might easily mistake trauma for bashful ness.

The tapestry of The Railway Man, which unfolds with a time structure of literary intricacy, conveys a compelling and emotionally gratifying story of love and forgiveness. As Lomax swears revenge on the man who still plagues his dreams (played by Hiroyuki Sanada in the present and Tanroh Ishida in the past), The Railway Man offers an absorbing and surprising tale of finding catharsis in the most unexpected of allies.

Director Jonathan Teplitzky handles the complexity of this true-life tale with care, staging the wartime scenes with impressive scale and gravity. The scenes in the present-day sequence alternatively unfold in an atmosphere of ethereal haunting with how gorgeously Teplitzky and cinematographer David Hirschfelder compose the tale. As Finlay recounts Eric’s story to Grace within a back lit room, The Railway Man almost looks like ghost story. The Railway Man tells an elaborate and evocative tale about the sins of the past and of the redemptive power of atonement and forgiveness.

The Railway Man screens Thursday, Sept. 12 at 11am at the VISA Screening Room. 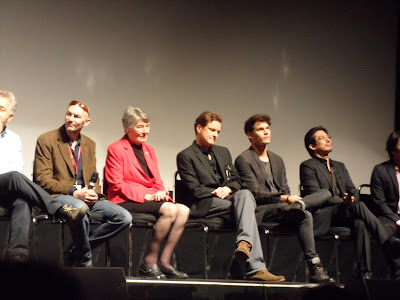