TIFF Review: 'Tom at the Farm' 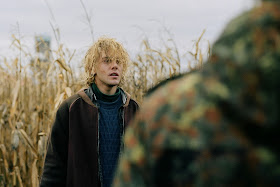 Xavier Dolan, the wunderkind of Québécois queer cinema, does a surprising turn of form in his fourth feature Tom at the Farm. Dolan strips away much of the visual audaciousness that, for better or for worse, defines the young auteur for a new generation of viewers. Some film fans, including this reviewer, found Dolan’s first three films to favour style over substance (not always, though), so it’s a pleasant surprise that Tom at the Farm sees Dolan make unexpected use of minimalism as he changes gears and delivers a haunting love story set in rural Québec.

Tom at the Farm is a wildly convoluted film nevertheless as Tom (played by Dolan) leaves Montreal for the countryside to attend the funeral of his recently deceased boyfriend Guillaume. Guillaume’s mother, played by Lise Roy, didn’t know he was gay, so doesn’t acknowledge (or even suspect?) that Tom might be the lover she was hoping to meet. It’s no wonder that Guillaume fled for the city, as his family is a wicked bunch. His brother, Francis (Pierre-Yves Cardinal), acts most inhospitably towards Tom and bullies him with homophobic hatred that pressures him to stay on the farm to help keep up appearances. Francis, a latent homosexual, assumes a creepy kind of control over Tom that is a mix of rage and attraction.

The execution of Tom at the Farm is never really believable, especially since Tom’s slip into Stockholm syndrome is so abrupt that the film as a whole never really convinces. (It’s not like Adele’s melancholy longing in Labor Day.) Dolan, on the other hand, makes provocative use of genre as he crafts a psychological thriller about the fear of coming out in small communities where nobody has secrets and everyone is a devotee of the Catholic Church. The less-is-more approach of Dolan’s style in Tom is equally effective, as the director’s flair for arresting compositions makes excellent use of the dreary Quebec landscape and removes any hint of romanticism one might have for quaint country living.

The only echoes of Dolan’s excessive stylishness can be found in the exquisitely, if gratingly, overwrought score by Gabriel Yared, which builds Tom’s inner turmoil with unrelenting chords. Other soundtrack choices are spot-on, though, especially a great French cover of “The Windmills of Your Mind” that opens the film and an appearance of Corey Hart’s “Sunglasses at Night” that is delightfully incongruous. Tom at the Farm finds its most Dolan-esque moment in an odd dance number between Tom and Francis that forms the film’s cinematic centrepiece. It’s an uncomfortable tango between imprisonment and desire, equally ludicrous and effective. Oh, and Tom at the Farm also includes an abundance of close-ups of the director’s own face as he trains the camera on the film’s protagonist. It’s a tactic that one could easily confuse for narcissism; however, it’s better taken as proof of a filmmaker’s expression of his own character’s interiority.