TIFF Review: 'Under the Skin' 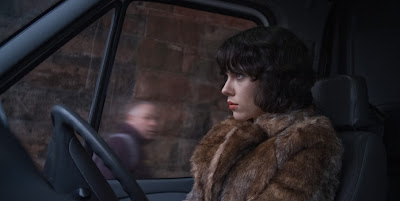 Scarlett Johansson might play Black Widow in the Marvel movies, but she is a true man-eater in Jonathan Glazer’s Under the Skin. She also plays an alien. Under the Skin gives Johansson her weirdest, strangest role to date, because she not only plays an alien, but because she owns what is mostly a dialogue-free one-woman show. Her alluring come-hither look can indeed carry a film. Johansson provides a seductive stare for 108 minutes as her extraterrestrial named Laura travels the picturesque Scottish countryside devouring men who succumb to her charms.

Director Jonathan Glazer (Birth, Sexy Beast) has fashioned an old-school sci-fi film that creates uncertainty and unsettling eeriness through a masterful creation of tone and atmosphere. It is an unnerving mind game that feels part Kubrick and part Lynch. Under the Skin, in a similar vein, might prove to be this year’s Holy Motors as it is indescribably weird, but intoxicating specifically because of its tongue-twisting strangeness. The film is sure to call Motors to mind during the surreal seduction scenes in which Laura ensnares her prey. Glazer removes the characters from any trace of their scenic Scottish setting and places the tango in a placeless soundstage. As Laura performs a seductive striptease and struts her stuff for the boner-sporting men, she traps them in a watery purgatory before they shrivel and die.

Under the Skin is Johansson’s sexiest and most-stripped down part to date, although it makes little use of her sultry, smoky voice. There is scant dialogue as Under the Skin lets the audience see Earth through the eyes of an alien put there with no apparent motive other than to feast on Earth’s men. The role relies heavily on Johansson’s star appeal, for much of the film consists solely of her icy stare, yet it asks her to shed her dramatic skin and act mostly as a blank slate for much of the film. Her body is a vessel like the skin Laura inhabits.

Glazer’s methodical direction is precise as he allows the slow, silent film to sustain itself through Johansson’s uncannily expressionless eyes. The masterful score by Mica Levy acts as a double for the dialogue, as it fills in the gaps on the soundtrack with peculiar strings that sound anachronistically futuristic. Under the Skin never lets its audience too far into the mystery and keeps them at an ambiguous distance, constantly deciphering and processing the film that unfolds before them.It’s surreal and hypnotic. Under the Skin, like the best of science fiction films, concerns itself through questions rather than answers. Like Leo Carax’s Holy Motors, Under the Skin lets audiences begin with the best question to chase such a weird cinematic odyssey: the first words out of one’s mouth following Under the Skin should surely be a resounding, “What the fuck?”