TIFF Review: 'You Are Here' 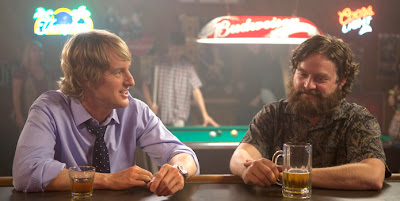 Matthew Weiner’s “Mad Men” might be one of the most cinematic television drama series ever created. The period drama has a style, scope, and substance rarely seen on the airwaves. It’s no wonder, then, that You Are Here, Weiner’s feature film directorial debut, would yield considerable interest from fans eager to see what he could do in a different canvas. You Are Here might therefore be an entirely different film experience for fans of the AMC series and for filmgoers who have never had the pleasure of watching one of Don Draper’s Shakespearean ad pitches. You Are Here might be a case where ignorance is bliss.

You Are Here is often funny. It’s equally sprawling and messy. It’s also about twenty minutes too long.

Weiner makes the transition to film with an indie comedy, which is just about as far as one can get from “Mad Men” without including an alien. Weiner wrote the script during his days as a writer on HBO’s “The Sopranos” and shot the film during a gap in production on “Mad Men” with much of the show’s crew. You Are Here is essentially an indie relative of The Hangover in Amish country as the film puts Owen Wilson in charge of  the rambunctious bearded man-child of Zach Galifianakis. (Although You Are Here was penned before 2009’s The Hangover.) Neither actor drifts far from his usual onscreen persona, although Galifianakis’s beard looks fits right in in Amish country. One of the disappointments of You Are Here, then, is its comparative softness in characterization in light of what Weiner can do with a man and a cigarette on TV. The overall weakness of the film’s roster of one-dimensional female characters is especially disappointing.

You Are Here is certainly not a bad film by any measure, but it’s simply nowhere in the league of even the lesser episodes of “Mad Men”. Humorous situational comedy and an endless supply of clever dialogue ensure that viewers will be chuckling throughout the two hours of this buddy comedy that also makes room for a clear message about social responsibility and sustainability. Weiner even offers a provocative and ambiguously symbolic image as an endnote for viewers to ponder, which  demonstrates a fine eye for the visual power of cinema that might have been more welcome elsewhere in the film. It’s an intriguing juxtaposition between the old and the new—or, as Donald Kaufman would say, technology versus horse—that might have inspired a campaign at Stirling Cooper Draper Pryce and should inspire a post-screening discussion. You Are Here is thus an enjoyable film that mightsimply have enjoyed a stronger reception as a first feature had its director not been the creator of the best show currently TV.