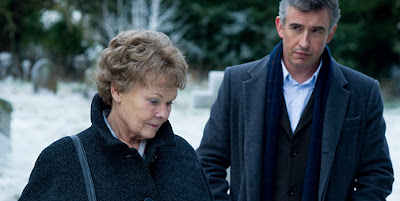 “Fucking Catholics,” quips Martin Sixsmith one of Philomena’s many lines that is alternatively provocative and hilarious. Philomena boasts one of the best scripts of the year in Steve Coogan and Jeff Pope’s adaptation of Martin Sixsmith’s non-fiction work The Lost Child of Philomena Lee. Philomena’s tale is heartbreaking as Martin assists Philomena track down the child that was taken from her by the church when she was a teenage mother. Coogan and Pope’s screenplay is a compelling character study and a bold social commentary alike as the film reveals the coldness of the Catholic Church and shows how some overzealous, not to mention criminal, piety betrayed members of the faithful.

Director Stephen Frears makes a comeback after a slight trio of misses in his filmography as Philomena takes the audience on an emotional journey that has viewers in stitches one moment and shedding tears the next. Relying primarily on the strength of the actors and the calibre of the script, Frears provides a tale that plays like a crowd-pleaser but offers an eye-opening study of a deeply flawed system. Judi Dench gives a four-hankie performance as Philomena Lee while Steve Coogan gives a surprising dramatic turn as the stodgy straight-man with the quick tongue. Dench devastates in a performance that is bound to be an award-season talking point as the actress portrays her daft character with a jaw-dropping range of emotion. Philomena also has some good turns by some very, very nasty nuns. Philomena could very well make atheists of us all, but the final note of forgiveness and plainness, conveyed so eloquently by Dench, offers the perfect sentimental with which to end this profoundly stirring story. 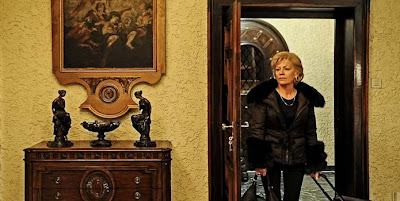 Child’s Pose won the Golden Bear for best film at this year’s Berlin Film Festival and then went on to become Romania’s submission in the Oscar race for Best Foreign Language Film. The film might struggle to make the final shortlist since its slow pace might be too arduous for even the most discerning of viewers, but the film could go all the way elsewhere with its fascinating lead performance by Luminita Gheorghiu as a mother with unwavering devotion to her spoiled and irresponsible son (Bogdan Dumitrache). Gheorghiu gives a captivating turn as the Romanian matriarch manipulates every character onscreen and pulls strings to manipulate charges brought against her son. Her final scene that breaks through Cornelia’s icy surface and fully realizes both the mother’s love and her guilt is a tour-de-force of raw emotion.

Child’s Pose brings much of the same formal minimalism that has brought rapturous attention to Romanian cinema in recent years. The handheld camerawork and arbitrary zooms mix with bare-bones realism to make for a difficult, if thought-provoking experience. Netzer’s character study is tinged with irony and it isn’t afraid to use the shaky camera to view its upper-class matriarch with a critical eye. Cornelia is a woman who can work the system with her hefty wallet, but such cold behaviour has a human cost, as virtually all of her personal relationships are strained and unsympathetic. Child’s Pose is worth the effort of its taxing pace. Like the Romanian New Wave of which it is a part, it takes a slow beginning to bring good rewards. 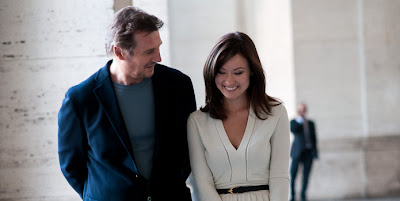 Academy Award winner Paul Haggis returns with another multi-narrative ensemble film akin to his sleeper hit Crash. Third Person might be less like Haggis’s Crash and more in the vein of Fernando Meirelles’s 360 as it trots the globe in a sprawling star-studded tale. It would be difficult to say much about Haggis’s complicated puzzle without giving much away, so it’s best to keep details about the three core threads of the film—one in New York, one in Rome, and one in Paris—as the only baggage one brings into the film. Each story reveals the secrets of the other as Haggis ties the stories together with shared traits, chance encounters, and global connectivity in the fast-paced streets of the three iconic cities.

Haggis gets uniformly strong work from his cast, most notably Brody and Neeson, while Wilde offers an impressive dramatic range that she hasn’t hit before. Kim Basinger delivers the film’s most emotionally compelling moment in spite of receiving the film’s most deceptively underwritten role. However, the strong ensemble is outshone by the intricate editing by Jo Francis, which includes cutaways to clues that are so often so fleeting they’re barely perceptible.

Third Person, for all its ambition and impeccable craftsmanship, struggles to come together as the treads and characters eventually converge. Third Person doesn’t carry the same emotional payoff as Crash does, but it’s bound to be as strong a conversation piece since the post-screening discussion might yield more rewards than the experience of sitting through the film itself. (My three festivalgoers and I all had differing opinions of how the pieces fit together.) The ambition of Third Person could equally be its downfall, though, as the demands of mentally engaging with every second of a film that runs two hours and ten minutes could prove too exhausting for some. The film demands repeat viewings, although the lack of immediate reward might not provide enough incentive to revisit it. The real debate of Third Person might be whether it’s brilliant or simply convoluted, but it certainly enjoys some flavour of each since it almost guarantees to prompt a discussion that is as roundabout as the film itself.