TIFF Reviews: 'A Field in England', 'A Touch of Sin', 'Sarah Prefers to Run'

A Field in England 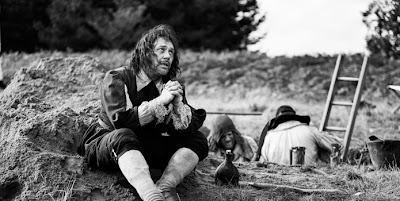 The shit hits the fan in Ben Wheatley’s A Field in England and the result ain’t pretty. A Field in England gives TIFF-goers their first and hopefully only chance to experience an intoxicating drug trip in 1648 England. A troupe of men flees the ongoing Civil War only to be captured by a cruel commander (Michael Smiley) who forces them into doing the heavy work on a treasure hunt. The hidden gold is a crop of hallucinogenic mushroom that sends the men on a bizarre romp of brutal violence and imaginative flights of the imagination.


A Field in England might be the one film at the festival that has the unique character of being both a bat-shit-crazy gonzo-trip and a thundering bore at the same time. Wheatley insists that the style of A Field in England harkens back to a kind of weird experimental programming he enjoyed on British TV at 2:00 in the mornings of the 1980s, but has disappeared today. One could agree that Mr. Wheatley’s methodology is successful, although one should also note that much late night programming is good for little else but inducing sleep. A Field in England is competently made as Wheatley devises a bunch of ye olde film tricks on cheap looking digital. Silly tableaux shots meet funny musical-ish numbers and a black hole of strange psychedelic embellishments. The result is formalism run amok. 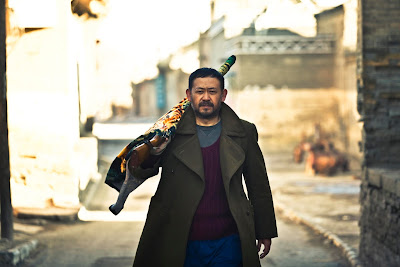 A Touch of Sin copped the prize for Best Screenplay at this year’s Cannes Film Festival and it’s easy to see why. The film is an ambitious four-narrative character piece about the waves of violence rippling through contemporary China. Each of the four stories, which are connected with near imperceptible looseness, tells of an outsider who resorts to violence to reconcile an escalating problem. Each of the vignettes writer/director Jia Zhangke presents asks the audience to weigh the degree to which such violence is gratuitous. One story might be a murderous rampage of comical B-movie retribution while another might begin as genuine self-defense. The four stories, however, mostly come together with the realization that violence is not the solution.

The overall execution of A Touch of Sin, however, might not be as strong as its purpose or ideas are. Each of the four vignettes unfolds at a pace that is almost unbearably slow. It’s effective how jarring the final acts of violence feel in each of the four sequences, but the anticipation is sometimes far too taxing. The second chapter of the film, for example, is so tedious that it’s wholly forgettable. Other chapters, such as the third vignette, are consistently engaging thanks to the strength of the performances that carry the largely muted build-up to the violent finale.

If one can withstand the slow pace and stomach the operatic bloodshed that comes after, then A Tocuh of Sin provides four servings of bloody good violence cooked on a fine simmer. Jia Zhangke's methodical direction allows the graphic brutality of A Touch of Sin's blood-soaked boy count to provide an exclamation point to the ambiguous social commentary that precedes it. The result of A Touch of Sin, though, is an unsettling tale of the violent potential that resides in any person and needs only the right environment to metastasize and explode into fatal carnage.


Update: A Touch of Sin screens in Ottawa at The ByTowne beginning Nov. 8.
It is currently playing in Toronto at TIFF Bell Lightbox

Running is a solitary experience and Sarah is, appropriately, a solitary figure. Sarah spends much of the film jogging alone or quietly observing life from the sidelines. Her whole life is a training camp for her love for running. She doesn’t do it for the medals or for the status: Sarah simply prefers to run and push herself further with each race. Her greatest comes in a late-act revelation about a heart condition that could threaten her running career. Sarah, like Mickey Rourke in The Wrestler, wants to pursue her passion until the very end. Any race could be a literal finish line for her weakened heart.

Desmarais gives a quietly commanding performance and keeps the audience at a distance with Sarah’s dense social ineptitude. She’s not a girl one gets to know too easily. She keeps herself guarded like a player unwilling to be sized up by her competition. Robichaud instead colours the background of Sarah’s story and shows the audience the life Sarah passes by with her self-contained exercise. The quirky beat of the film—it’s like a Québécois Garden State without the hipster soundtrack—finds joy in being a self-professed outsider. Some quirks, such as Sarah’s leering glances around the locker room or the film’s occasional title cards on cookie fortunes, are eccentricities of “first feature syndrome,” although the film as a whole displays a true talent in the making. Especially memorable is the film’s climactic karaoke sequence, which is an involving and dazzling feat of direction that uses sights and sounds to accentuate the subtle expressiveness of Desmarais’ performance. Sarah Prefers to Run is a fun, leisurely journey through growing up and coming of age.


Update: Sarah runs onto home video platforms Nov. 5. (en Quebec!)
And it opens in Ottawa at The ByTowne Dec. 12.