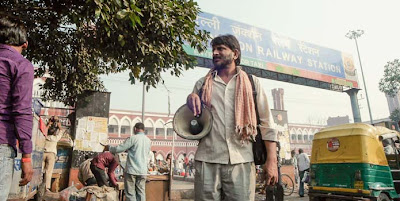 Mahendra, played by a remarkably affecting Rajesh Tailang, is a chain-wallah on the streets of New Delhi. He makes little money to bring back to his family’s small home, so he sends his twelve-year-old son, Siddharth, to work in a factory far away. Siddharth doesn’t come home, though, when the family reunites for Diwali. Mahendra, afraid that Siddharth might have been a victim of child trafficking associated with factory labour, embarks on a search to find his son. Siddharth evokes a heart-rending, if unabashedly sentimental, tale as Mahendra travels the streets of India and explores every gutter and slum to find the son he lost long before he learned of Siddharth’s disappearance. Writer/director Richie Mehta tells the touching fable with startling realism, making the abject poverty that precipitated the awful situation a central character in the story. The quest is not so much a search for a lone boy, but for an end to the social conditions that might lead a parent to feel so helpless and destitute that he would sell his child in the first place. The fittingly unconventional end to Mahendra’s search denies the closure one needs to bring such a poignant tale full circle, which makes the lack of resolution all the more effective. 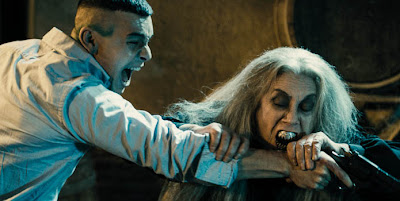 Spongebob Squarepants eats lead in what is arguably the best opening sequence of the festival in the loony Midnight Madness flick Witching and Bitching, which  arrived at TIFF fresh out of the post-production oven. Spongebob gets a cap in his ass in a hilarious robbery sequence that sees some baddies dress up in a range of costumes that includes everything from Minnie Mouse to a shotgun-toting Jesus in silver body paint. Jesus, né José (Hugo Silva), performs double duty during the heist because the restrictions of his nasty custody battle and a lack of funds to pay for a babysitter force him to bring his son on an unconventional take-your-kid-to-work day. The heist is a rapid-fire bloodbath that opens Witching and Bitching with an ample body count and a frenetic pace that keeps on building as the show continues.

Nothing else in Witching and Bitching ever really lives up to the outrageous opening act, but this hilarious horror-comedy nevertheless provides some solid entertainment as the surviving robbers get the fuck out of Dodge and encounter a coven of witches—led by Pedro Almodóvar muse Carmen Maura, no less—that requires a child for sacrifice and some men for a feast. The cackle of witches conjures some gory fun as director Álex de la Iglesia (The Last Circus) creates a ghoulish adventure of horror-comedy escapism. The production value of Witching and Bitching is top-notch—it’s a B-movie bloodbath wrapped in A-level talent—as the story unfolds at a madcap pace and a booming wall of sound jumps out from the speakers like the shriek of banshee. (The film is obnoxiously loud.) Witching and Bitching puts the audience under a spell of hyperbolic sexism and stirs the pot with eye of newt and heart of toad. The enchantment wears off as Witching and Bitching thunders along for about twenty extra minutes too many, but the finale is a wild cinematic spectacle. Witching and Bitching is an outrageous orgy of bloody good fun. 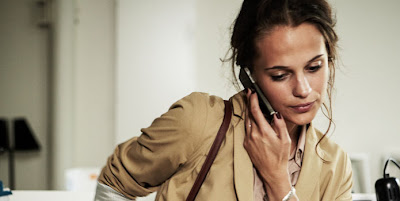 Way to break my heart two festivals in a row, Alicia Vikander. It’s just a shame, though, that your ace performance in Hotell doesn’t appear in a film that’s as easy to recommend as last year’s TIFF standout Anna Karenina. Your expressive and fragile face portrays such an overwhelming range of emotion that you deserve to be called one of the best young stars working today. You therefore deserve better than this silly and convoluted tale of a support group getting through trauma together by escaping the suffocating responsibilities of life and enjoying a nomadic lifestyle of checking in to one hotel after another. It’s not a bad film, though, as the surprisingly funny and offbeat Hotell provides an enjoyable tale of healing.

The idea of the hotel arises in a therapy session when Erika (Vikander) likens her depression to a story about a woman who saw life as a hotel, which allowed her to  shed her skin and walk away from relationships and responsibilities while seeing life from various perspectives. It’s one of those cases where, as Grand Hotel’s Otternschlag might say, “People come, people go. Nothing ever happens.” The vagabond way of picking up and walking away from one’s troubles only provides temporary relief as Erika leads her peers on some ludicrous group exercises, which include medieval torture and anonymous sex. There is no escape from life’s troubles, though, as the problems Erika and company face outside the hotel loom over their therapy follies like the cloud of depression the heroine can never seem to shake. It’s a silly, messy affair rendered consistently watchable by the shaky Dogme-ish close-ups on Vikander’s endlessly expressive face. 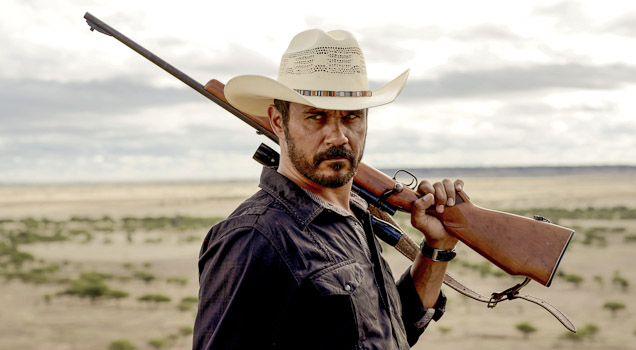 Mystery Road joins Felony to provide a double-barreled Aussie thrill ride at TIFF this year. Mystery Road is an old-school western in the land Down Under, as Sheriff Jay Swan (Aaron Pedersen, leading a stacked male cast), an Australian aborigine, returns to his small hometown and lands a nasty case that begins with the body of a murdered young Aboriginal girl, who has had her throat cut and was left to bleed out in a drainpipe underneath the highway. The arid plains surrounding the dusty risk, rampant with wild dogs, create the perfectly menacing landscape to engulf this little town in sandstorm of good old-fashioned violence. Writer/director Ivan invests Mystery Road in the sociology if its surroundings: capturing the town in memorable bird’s eye view shots and superbly foreboding backsplashes of sunrises and sunsets, Mystery Road is more about the evidence outside the case than the endpoint Jay leads to during his investigation.

The case brings racial tensions to both sides of the investigation as Jay encounters indifference from his fellow police—what's one more dead black kid to them—and from parties from his own community who don't trust any man with a badge. Mystery Road continues a strong streak of Aussie films that have made the country's deeply embedded racism central to their story. Like this year's The Sapphires or this festival's Around the Block, Mystery Road confronts racial barriers as a key dramatic struggle. The racial tensions infuse the western as a contemporary tale of cowboys and Indians, although the only savagery one sees takes place in the dingy offices of the police station.

Sen unfolds the mystery slowly, as if a case probably would reveal itself in town where everyone is either too bigoted or too apathetic to be perturbed by the death of a child. The simmer of Mystery Road might be too slow for some—it might be a film that played better at the beginning of the festival, rather than in the fatigued back half—but it culminates in a thrilling and violent finale that is made all the more adrenaline-pumping by the slow burn that precedes it.