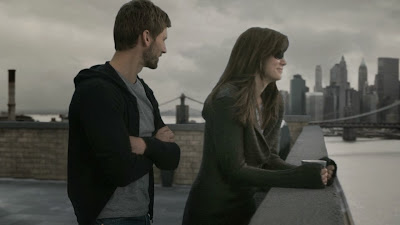 Forget Meryl Streep, Ottawa is the real chameleon when it comes to disappearing in various roles. Like Meryl, Ottawa can slip into any guise with some make-up, an accent, and a little elbow grease. Meryl’s roles have ranged from Sophie’s Choice to Mamma Mia! while the National Capital has played everything from Pennsylvania (House at the End of the Street) to Montreal (The Maiden Danced to Death). Now, the city gets a dual role as New York City and, wait for it, Afghanistan in the bargain bin thriller Penthouse North. The transformation of the former setting isn’t Streeply seamless, though, as the exterior scenes of Penthouse North play out in a generic, placeless city that doesn’t look or feel anything like New York. The film is has its flaws, yet it is nevertheless a respectable example of what local talents can do. Penthouse North is not a particularly good film overall, but one can’t deny that the Ottawa’s portrayal of Afghanistan is far more convincing than Michelle Monaghan’s portrayal of blindness is.


Monaghan stars as Sara, a former war photographer holed up in her New York penthouse after a violent encounter in the Middle East leaves her blind. Afghanistan is nothing compared to the Wait Until Dark-ish scenario that awaits her New Year’s Eve sees when she returns home from buying champagne (at Wine Rack…). Sara struts around the flat unawares that her boyfriend, Ryan (Andrew Walker), is lying in a pool of blood until she slips in said pool whilst thawing some M&M munchies. It’s only then that she becomes the victim of a knife-wielding maniac, Chad (Barry Sloane) and his maniacal boss, Hollander (Michael Keaton), who rough her up in search of some secret stash Ryan has hidden in the posh penthouse.

Viewers might be surprised to learn that Sara’s penthouse is actually a revamped grocery store: an old No Frills lets Ottawa play Manhattan as the windows of the home look out to a cityscape inserted atop a greenscreen. The transformation is moderately effective, although one can discern the seams of the post-production efforts around the penthouse a little too easily. The penthouse, ironically enough, is a no frills affair. Sara and Ryan share a large, cavernous, generic penthouse that looks a lot more like a movie set than it does a lived-in home. The sparseness of the set is convenient for Sara, though, as the magazine centrefold setting gives her lots of room to move blindly when Chad and Hollander toss her around.

The encounter unravels in a series of unintentionally hilarious moments as Monaghan runs around the apartment like Mr. Magoo to evade Chad and Hollander. The mêlée ups the body count by leaving the film’s one token black man dead and Sara’s black cat Shadow (a scene-stealer) the victim of a few narrow escapes. Sara’s blindness, however, plays for laughs just as often as it serves as a trait of her victimization, albeit perhaps inadvertently show.

Penthouse North doesn’t really try to convince the audience that Monaghan is blind. Aside from a cut to the star in sunglasses following the film’s preamble and opening credits, plus a cranky cyclist who mows Sara down in an intersection and quips, “What are you, blind?”, there’s little to persuade viewers that this is not a fully-abled woman running around a film set doing her best to avoid bumping into things. Sara/Monaghan moves through the spacious apartment with a bit too much ease for a woman recently afflicted by blindness, and she makes one glance too many at things putting her in peril. A fearful shot at a pitcher Hollander cradles before he goes to waterboard Sara, for example, betrays how Penthouse North uses an outdated portrayal of disability to make a victim.

Soldiers with post-traumatic stress disorder might be equally put off by the film’s exploitation of the War in Afghanistan as a thematic device to give Sara strength. Intercuts to the evil burka clad woman parallel Chad and Hollander as a bunch of foreign enemies threatening the film’s heroic white girl. Ditto the pregnant woman whose water breaks at exactly the wrong moment and risks putting the heroine at further risk. It’s all rather hokey.

Nothing delivers in this implausible thriller aside from a few moments of pseudo-Hitchcockian suspense that leave the audience wondering how much Sara knows about—or is in on—Ryan’s dirty plot. Penthouse North suffers a similar fate as last year’s locally made thriller House at the End of the Street, which could at least be recommended as passable entertainment for its target teen audience, since there’s not much to recommend outside the production efforts of local talents. Penthouse North somewhat shows the city as a viable destination for economical filmmaking, but the film is destined to be lost in the black hole that uses houses such generic and schlocky thrillers. Penthouse North is a complete dog of a movie redeemed only by a cat that always lands on its feet.