Dorming in the Digital Age 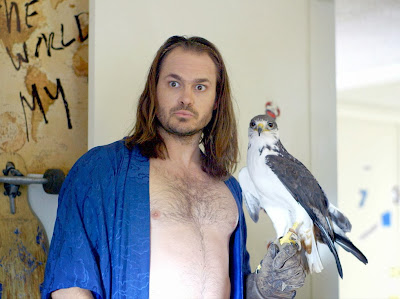 Freshman flicks often seem so exaggerated and out to lunch. Not much shocks this reviewer, though, when it comes to campus-set comedies since my freshman year at Queen’s coincided with Homecoming 2005. Fret not, readers. I was a good (re: lame) frosh and was probably at the movies when the car was set on fire. It’s refreshing, though, to see an amusing college comedy like Dean Slater: Resident Advisor that seems to get the anxieties of the first year at school without being too over the top.


Tyler (Nick Renaud) gets the ultimate experience in high-school graduation humiliation when his stiff dad (Christopher Grove) finds a letter from Tyler’s top choice for college retracting its offer of admission. It’s off to Southern California State University (SCSU) for Tyler and all his techy skills. SCSU is the bottom of the barrel for schools: they’re overrun with crabs thanks to the school’s lame choice of mascot.

Tyler gets the ultimate freshman experience, however, when his keener RA takes the floor to the desert for a bonding exercise and is arrested by the police. (The desert also happens to be a hotbed for Mexican illegals.) Enter Dean Slater: Resident Advisor on a hot-air crab balloon to save the day. As played by Mitchell Jarvis, Dean Slater is a kooky, free-lovin’ spirit who floats on a haze good vibes. “The Dean”, as he’s own within campus folklore, spurts enough fortune cookie philosophy and random humour to make the film that shares his name a true class clown. He even leads the co-eds on an absurdly humorous musical number fuelled by absinthe and waffles.

The Dean shares with Tyler and his two roomies, Cory (Glenn McCuen) and Yuji (Jimmy Wong), the codes that a frosh must follow if he wants to achieve inner harmony (re: get laid) during Freshman year. The wisdom of The Dean’s mythic “Magnum Dopus” fuels the freshman experience. The boys must detox by tossing the laptop and ditching the phone, and then learn the art of face-to-face communication.

Unplugging is just the advice the boys need. Like everyone these days, especially young people, the three friends are tethered to the electronic leash of new age communication. It’s a choke chain, really, when things like Facebook and Skype pull one away from living in the moment. Cory’s off-campus girlfriend is the epitome of a ball-and-chain in digital dating. The boys battle all sorts of social media demons in this day and age in which virtually every move is tagged, tracked, and Like!-d. Tyler is especially haunted by one juvenile video that was uploaded to the ’net. Now he’s “Fartloader” for life.

The photogenic cast delivers some decent laughs as they follow The Dean’s groovy advice. Jarvis is especially fun as The Dean. He’s a bit like The Dude crossed with Jeff Spicoli with a dash of Russell Brand. It’s too bad that The Dean doesn’t get more screentime, though, since he brings more laughs to one scene that some of the friends put together.

Dean’s campus is a zoo for fart jokes, public urination, and casual sexism, so uppity Harvard types might not want to join the SCSU crabs. Dean Slater: Resident Advisor doesn’t go too far with the gonzo R-rated stuff, though, which makes this amusing comedy harmless fun for the teen crowd. Dean Slater provides all the booze-fuelled hijinks and rowdiness one expects in comedies geared for teens, but it offers something unexpected, too, with its relevant message that today’s college-set youths should learn to enjoy life the way their parents did: without Internet, Facebook, gizmos, and iThings.

Dean Slater is a step above the likes of dumb dorm flicks like 21 & Over thanks to the Sanders’ brothers attempt to comment on the added and unnecessary pressures of dorming in the digital age. Fourteen years after American Pie, teen comedy takes a bite out of the Apple. (Even film snobs need a comedy now and then.)